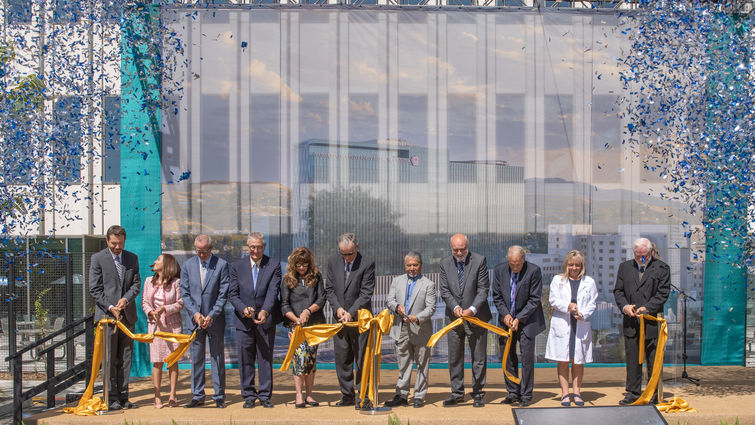 Built to meet updated state seismic codes for acute care facilities, the campus is home to LLUH’s new 16-story Medical Center and 9-story Children’s Hospital tower. The campus incorporates leading advances in patient safety and comfort and was designed to continue the organization’s 115-year legacy of care and healthcare education in what has become one of the most medically complex regions in the nation.

The new campus was made possible in part by the philanthropy efforts of Vision 2020 – The Campaign for a Whole Tomorrow. Leaders thanked philanthropists Dennis and Carol Troesh for their lead gift of $100 million to the initiative.

Hart recounted his personal journey. He was born in the Loma Linda Sanitarium, which was located on a nearby hill and now houses two university schools. He attended the Loma Linda University School of Medicine and helped to move patients into the Medical Center’s cloverleaf towers when they opened in 1967.

On Sunday, Hart took part in the transfer of patients to the new Medical Center and Children’s Hospital on the Dennis and Carol Troesh Medical Campus.

“What a remarkable transition in one lifetime from a quiet sanitarium with a College of Medical Evangelists to a world-renowned academic health center known as Loma Linda University Health,” Hart said. “We stand today on the shoulders of many who have made this transition a reality.”

We stand today on the shoulders of many who have made this transition a reality. Dr. Richard Hart

The acute care facility is built upon 126 base isolators to reduce the impact of seismic activity. The Medical Center is the second-tallest hospital in California and has 320 licensed beds, while the Children’s Hospital expansion adds 84 licensed pediatric beds for a total bed count of 364.

Kerry Heinrich, CEO of Loma Linda University Health Hospitals, reflected on the Seventh-day Adventist legacy of the organization, highlighting LLUH’s co-founder Ellen White arriving to the area in 1905 and remarking “this is the very place” that would be used to bring hope and healing. The new campus, Heinrich said, begins a new chapter in that legacy.

This very place will support the intense efforts of researchers whose discoveries will make an impact around the world. Kerry Heinrich

“This very place will be home to thousands of dedicated physicians, nurses, and clinicians, a place where they will provide world-class clinical care and education,” Heinrich said. “This very place will support the intense efforts of researchers whose discoveries will make an impact around the world.”

LLUH leaders thanked the state of California for its support of $165 million in funding. State Treasurer Fiona Ma, MS, MBA, expressed her appreciation at the ceremony. “I want to thank the Loma Linda community for all your good work and your persistence in making this happen,” she said.

A special additional ceremony was also held on the new facility’s fifth floor for the San Manuel Maternity Pavilion. Leaders thanked the San Manuel Band of Mission Indians for their contribution of $25 million. The gift, the largest in the tribe’s history, recognized the century-long partnership between the hospital and the tribe.

Loma Linda University Health comprises eight schools, six hospitals, and approximately 17,000 employees. LLUH is the flagship academic health sciences center of the Seventh-day Adventist Church, and it has sponsored numerous missionaries and served as a consultant for the establishment of the six other Seventh-day Adventist medical schools worldwide.

“The future physicians and healthcare professionals who learn here will have many opportunities to train in multidisciplinary teams and come to understand that meaningful patient experiences must be at the center of everything we do,” said Tamara Thomas, MD, executive vice president for medical affairs at Loma Linda University Health. “It is my hope that the work taking place within these walls will transform the lives of both our current and future healthcare professionals and the diverse community we serve.”