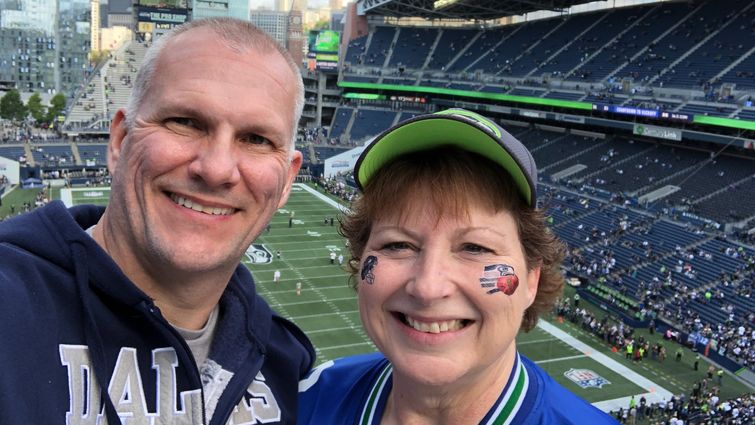 Ed Koehn and his wife, Karen, were able to continue their adventures during Ed’s treatment for melanoma, such as traveling to Seattle to watch their favorite football teams — Cowboys and Seahawks — play in October 2018.

Ed Koehn was unsure how to react when he was diagnosed with one of the deadliest forms of skin cancer. Yet he immediately starting working with experts at the Loma Linda University Cancer Center and grew hopeful. His assurance about overcoming the cancer persisted throughout surgery and immunotherapy treatment for melanoma, coming to fruition three years ago upon becoming cancer-free.

“As I started to learn more about how serious melanoma was, it was hard not to feel alarmed,” he said. “That transformed into hope. I knew I was in great hands and getting the best care.”

Melanoma is among the top three common types of skin cancer, but what sets it apart is its tendency to spread, or metastasize, to different parts of the body through lymph channels and the bloodstream. More than 9,000 people died annually from melanoma in the U.S. between 2012–2016, according to the Centers for Disease Control and Prevention (CDC).

Yet mortality rates for melanoma have dwindled in recent years as new therapies are yielding better outcomes for patients battling the cancer, says Huynh Cao, MD, an oncologist at the Cancer Center who oversaw part of Koehn’s treatment. Immunotherapy essentially leverages components of the patient’s immune system to fight cancer cells.

In years past, toxicity outweighed the benefits of treatments for melanoma. Conventional chemotherapy, for instance, tends to kill both healthy and cancer cells — causing more damage and unfavorable side effects — as opposed to more targeted immunotherapy. 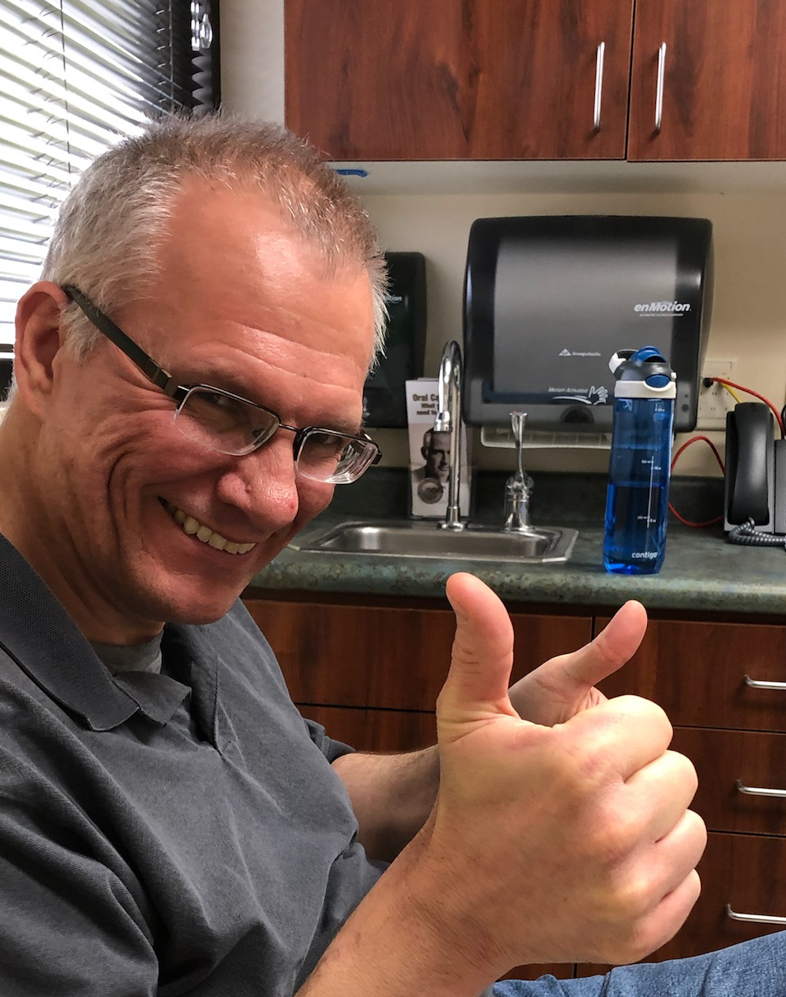 Thankfully for Koehn, an immunotherapy known as Nivolumab had been recently FDA approved and available as a treatment option. Every month for about a year, Koehn and his wife, Karen, traveled to Loma Linda University Health – Beaumont – Banning for immunotherapy.

“Treatment for melanoma is unlike what it was a long time ago — it’s not a death sentence,” he said.

Koehn recalled the hour-long immunotherapy infusion process as being seamless, and he experienced minimal side effects. He and Karen made a date of these trips by stopping at their favorite Mexican food restaurant on the way home. Koehn was able to continue working throughout the treatment as well as enjoy trips to Seattle and Chicago for sporting events and concerts.

Koehn had noticed the small, dark brown mole on his right forearm two years prior. It resembled the unassuming moles he had seen on his father growing up — none of which had led to any alarming diagnoses.

For safe measure, though, Koehn had his mole removed, only to see it reappear a year later. The second biopsy resulted in his diagnosis of melanoma.

Because of the cancerous mole’s return, Carlos Garberoglio, MD, a surgical oncologist, opted to remove a wide area around Koehn’s forearm mole and check the lymph nodes closest to the mole, located in the armpits, for signs of metastized melanoma.

Garberoglio said he only removed lymph nodes that were “hot and blue,” which identify the lymph nodes responsible for draining the area of the skin from where the mole originated. During the procedure, Garberoglio injected a radioactive material and a blue dye near the mole on Koehn’s arm. Both substances then move through the body’s lymphatic system and appear in lymph nodes that could contain cancer cells.

The surgical technique that Garberoglio employed to target specific lymph nodes is a result of medical advancements made in recent decades. In the past for such cases, Garberoglio said standard practice involved removing up to a dozen lymph nodes — whether affected by the cancer or not — which could lead to post-op complications like lymphedema, or swelling in the limbs.

Results from Koehn’s lymph node biopsy revealed melanoma cells had indeed spread from his mole, placing him at stage 3A. It was at this point that Koehn embarked on the one-year immunotherapy treatment that successfully expelled any lingering melanoma cells in his body.

Koehn has since routinely seen a dermatologist for skin exams and Cao for whole-body scans, which have consistently shown no signs of cancer for the past three years.

Koehn and cancer specialists are motivated to spread the word about skin cancer awareness, prevention, and treatment.

Cao and Garberoglio voiced that prevention is key — and always better than treatment. The single most common risk factor for melanoma is skin damage from sun exposure, Cao says, so wearing sunscreen for outdoor activities is paramount.

“Discovering the cancer earlier will make treatment easier, and, if you can prevent it from happening entirely, all the better,” Cao says.

Garberoglio advises using the ABCD as guidelines for skin self-examnination. If a feature on the skin bears any or a combination of these qualities, consider getting a biopsy.

“If there is something growing on your skin, don’t ignore it,” Koehn says. “Moles alone aren’t a problem, but moles growing later in life are a problem. Get it checked out, even if just for peace of mind — it may be nothing, but it might be something more serious and it’s better to catch it early.”

Koehn said he would advise anyone diagnosed with skin cancer to seek out the best medical care available with doctors they trust, follow advice, and quell fear with knowledge about new medical advances in surgery and treatment.

At Loma Linda University Cancer Center, physicians care deeply about the outcome and medical journey of a patient diagnosed with cancer. Loma Linda University Health has specialists who can help you decipher the clues your body may or may not be giving or join you on your journey back to health. Partner with a healthcare provider today to help answer all of your questions. Feel free to visit the Cancer Center website or call 1-800-782-2623. 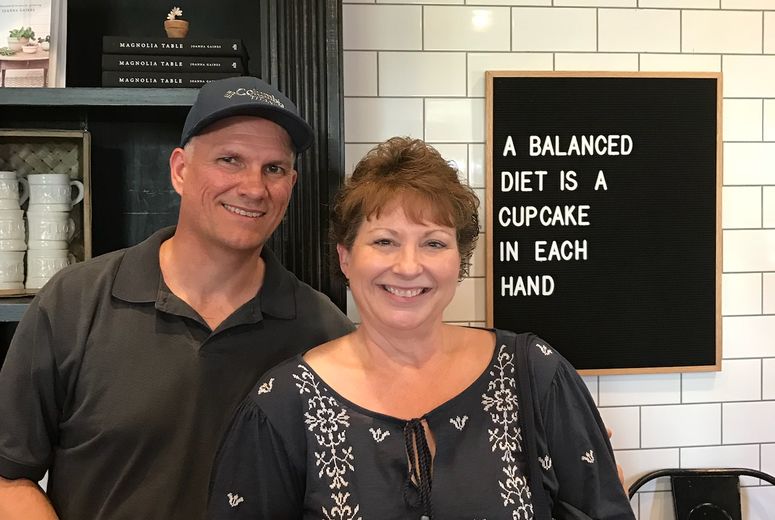 Ed and Karen Koehn at Magnolia Market in Waco, Texas in July 2018 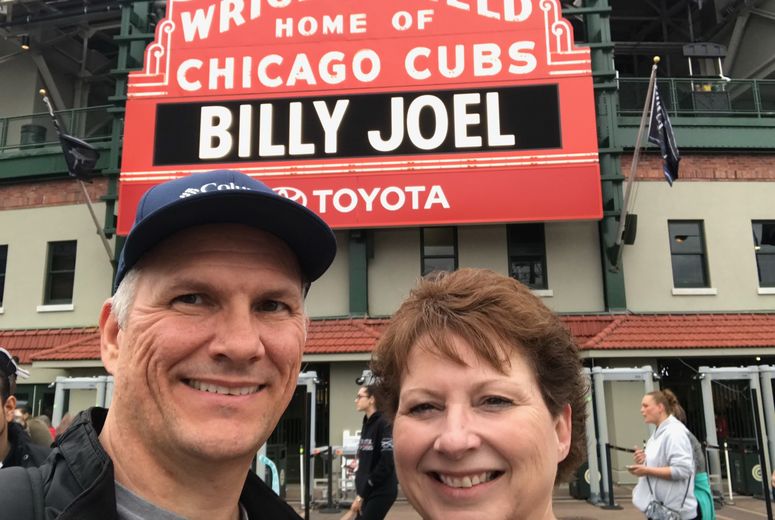 Ed and Karen saw a Billy Joel concert in Chicago, Illinois in September 2018 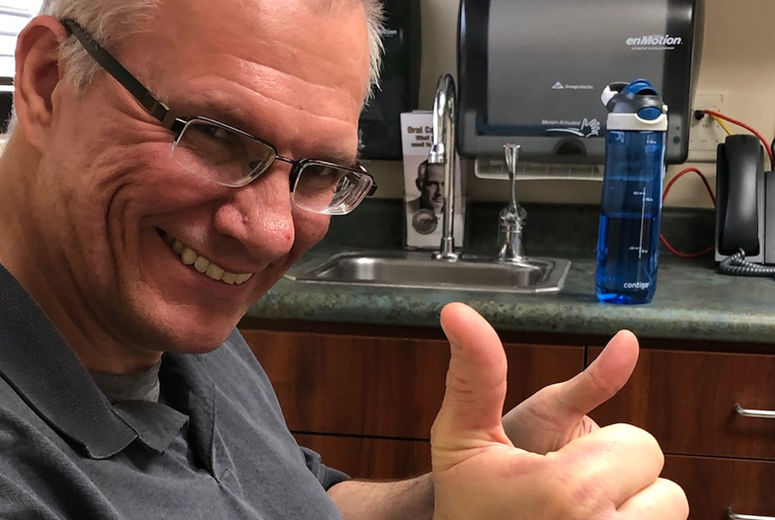 Ed on his last day of immunotherapy treatment in February 2019