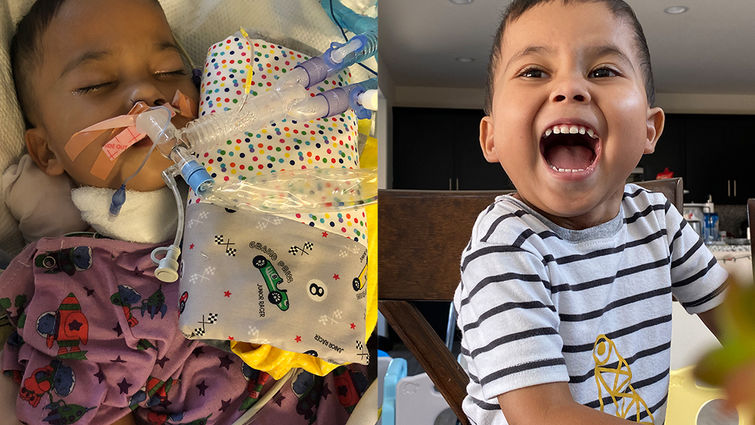 Jethro Quach, was born with a web of tissue blocking the trachea just below his vocal cords that almost stopped him from taking his first breath at birth. However, he was saved thanks to a specialized procedure during his c-section delivery. Three years later, in July of 2021, Jethro took his first unassisted breaths of air.

As a fetus, Jethro was diagnosed with an extremely rare fetal condition known as congenital high airway obstruction syndrome. Also known as CHAOS, it has been seen in less than 50 cases in the U.S. since 1989.

On July 6, Jethro faced another big hurdle in his journey — a major reconstructive surgery to help him breathe on his own.

“We performed a laryngotracheal reconstruction by taking two pieces of cartilage from his rib and attaching them to the front and back of his airway,” O-Lee said. “Essentially, we used the ribs to build his voice box and help it stay open. Once the reconstruction was in place, we were able to take out the tracheotomy tube.”

During the surgery, O-Lee and the medical team removed more webbing and thick cartilage from Jethro’s airway. Although they added the rib to his voice box and widened his airway, Jethro still needed to be intubated for two weeks after the surgery.

“We inserted a tube to keep his airway open after reconstruction,” O-Lee said. “The tube worked as a stint, which we hoped to remove a week later. Unfortunately, due to complications, we had to wait an additional week to go back in and remove it.”

Jethro’s medical journey has been far from easy. Before he was even born, Jethro underwent a number of tests and a surgery as he grew. At only 21-weeks gestation, a detailed ultrasound and fetal MRI confirmed that Jethro had CHAOS. At 24-weeks, when Jethro was approximately the size of a cantaloupe, a fetal surgery was conducted on Jethro while he was in his mother Jennifer Quach’s womb to drain fluid from his lungs. The surgery was needed for his development and to limit the risk of heart or brain damage.

In May 2018, Jethro was delivered via a tricky and intricate C-section procedure — an ex utero intrapartum treatment or EXIT procedure. This life-saving procedure allowed Jethro to be delivered halfway, with everything below his chest still in utero and connected to the placenta for oxygenation while a tracheotomy was performed. The tracheotomy involved creating a surgical opening and placing a tube in Jethro’s windpipe to assist him in breathing.

Jethro had been breathing with the help of a tube ever since.

By July 24, Jethro was breathing room air and eating by mouth, said Quach. “They took out his NG feeding tube, and he was tube free,” she said.

Although no longer in the hospital and at home healing — Jethro’s medical journey continues with speech therapy and monthly follow-up visits with his physicians to monitor the status of his trachea.

“If we can get through a year with no re-stenosis or narrowing, his airway should be stable, and we should be done after that,” O-Lee said.

O-Lee said it’s also incredible that Jethro is now developing a voice. “His voice box was congenitally narrowed down,” O-Lee said. “While he’s fluent in sign language, Jethro had no voice these past years. After reconstruction, I wasn’t sure he would have a voice because his vocal cords are so small, but he’s making noises and talking. We’re so happy about that development.”