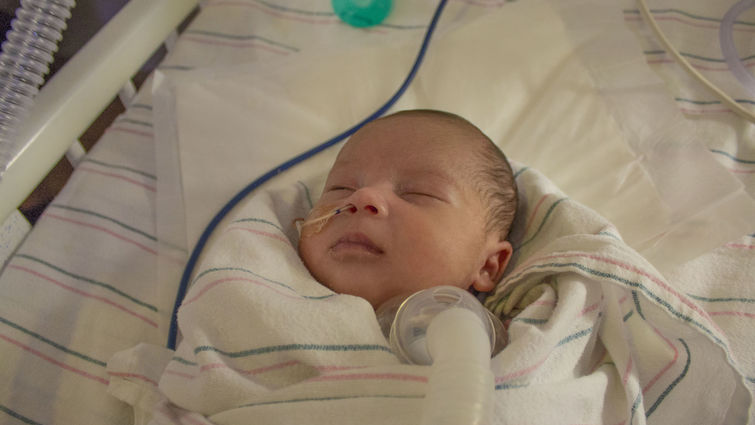 Jethro Quach, an infant diagnosed with a rare, congenital birth defect that would inhibit his ability to breathe independently at birth, was saved during birth thanks to a specialized procedure by a multidisciplinary team at Loma Linda University Children’s Hospital, the only tertiary care facility equipped to handle such a complex case in the Inland Empire.

Quach suffers from congenital high airway obstruction syndrome, or CHAOS, which is an extremely rare fetal condition. Even before his birth, Jethro’s mom, Jennifer Quach, was monitored by the maternal fetal medicine team to manage her pregnancy undergoing at least seven ultrasounds and three MRIs in the months leading up to her delivery.

While Jethro’s prognosis is hopeful, he has a long road ahead with at least one more surgery necessary before he will be able to breathe completely on his own. Doctors are keeping a close watch on the almost two-month old.

Ciprian Gheorghe, MD, PhD, assistant professor of obstetrics and gynecology and a physician at the maternal-fetal medicine center at LLUCH, says Jethro’s condition had the ability to cause abnormal lung development in utero, potentially leading to other issues.

“We were hoping this would be one of the instances where the problem self resolves, which is a possibility,” Gheorghe said. “Unfortunately, in Jethro’s case, he required a fetal surgery and another at birth.”

CHAOS is such a rare condition that there have been fewer than 50 cases in the U.S. since 1989, according to Jill Howie, MSN, who was the executive director of the Perinatal Institute at LLUCH at the time of the surgery. Jethro was only the second patient with CHAOS ever at LLUCH.

The life-saving procedure done at birth, an ex utero intrapartum treatment, or EXIT procedure, is so uncommon that it is only the second time it has been performed at LLUCH.

At 21-weeks gestation, a fetal echocardiogram that showed abnormalities led a pediatric cardiologist to suspect Jethro had CHAOS. After a week of additional testing, including a detailed ultrasound and a fetal MRI, doctors confirmed that Jethro had CHAOS.

Just below the vocal cords, there was a web of tissue blocking the trachea that would have stopped Jethro from taking his first breath at birth.

This was a collaborative effort that involved a lot of different people and departments, and everyone worked well together.Ciprian Gheorghe, MD

This was not the happy news Jennifer and her husband, David, were hoping for halfway during their pregnancy, something they had wanted since before getting married in 2014.

“We were ready to start a family right away,” Jennifer said. But they faced many challenges in their efforts to get pregnant, and when they finally did they were elated, calling Jethro their “miracle baby.”

“We prayed and prayed for him,” she said.

With more obstacles ahead, the Quachs were determined to become a family of three.

At 24-weeks, doctors at the Los Angeles Fetal Surgery Center performed the fetal surgery on Jethro, who, at the time, was roughly the size of a cantaloupe. A small incision was made in Jennifer’s abdomen to insert a scope containing a laser. The laser made a hole in the membrane, allowing the fluid to drain from Jethro’s lungs so they could thoroughly develop and limit any risk of heart or brain damage.

In the weeks following the fetal surgery, Jennifer said Jethro’s lungs began to develop and his overall health was improving in the womb. However, he still would not be able to breathe on his own at birth unless he had a tracheotomy, or breathing tube inserted in his trachea to help him breathe.

Jennifer was scheduled to give birth to Jethro via a cesarean section on May 17, 2018, although this wouldn’t be a standard C-section procedure.

While Jethro is in utero, it is Jennifer who provides him with oxygen, which passes through the umbilical cord of the fetus. “Once the umbilical cord is cut,” Gheorghe said, “he will no longer receive oxygen since he is not able to breathe on his own.”

According to pediatric otolaryngology surgeon Robin Dyleski, MD, the only way to have had enough time to do the tracheotomy would be via the EXIT procedure since he is still connected to the placenta and receiving oxygen from Mom.

During an EXIT procedure, the baby is delivered about halfway, with everything below his chest still in utero so that he remains connected to the placenta, receiving oxygen from Mom. This is done to minimize the chance for brain damage, which can occur if the baby is deprived of oxygen.

Because of the complex nature of the case, the Quachs had a team of specially trained physicians from maternal fetal medicine, NICU, pediatric ENT (ear, nose and throat), and pediatric anesthesiology working together to deliver their baby boy.

As soon as we learned of the diagnosis, we initiated a team to begin the months of preparation needed to ensure that everything was smooth and successful.Robin Dyleski, MD

Gheorghe performed the EXIT procedure and the tracheotomy was successfully completed by Dyleski.

“As soon as we learned of the diagnosis, we initiated a team to begin the months of preparation needed to ensure that everything was smooth and successful,” Dyleski said.

Once the tracheotomy was complete, Jethro was born weighing 5 pounds, 9 ounces, and although it was assisted, he was breathing.

On June 28, at exactly six weeks old, Jethro was discharged from the NICU at LLUCH. His trachea is still dilated. It iis unknown when his next surgery that will repair the blockage will occur, but until then the Quach’s are taking things one day at a time.

“We are thrilled to have our baby home,” said Jennifer, who spent every day at the hospital with Jethro and her expanded family of nurses and staff caring for Jethro.

“It feels like family is taking care of us,” she said.

Jethro’s team of physicians are optimistic of Jethro’s future.

“This was a collaborative effort that involved a lot of different people and departments, and everyone worked well together,” Gheorghe said.
The most important thing about CHAOS is early diagnosis, detailed fetal assessment and an adequate postnatal intervention for establishing an airway, “and that’s exactly what we were able to provide,” Gheorghe said.

Information regarding pediatric ENT is also available on their website or by calling 909-558-4444.