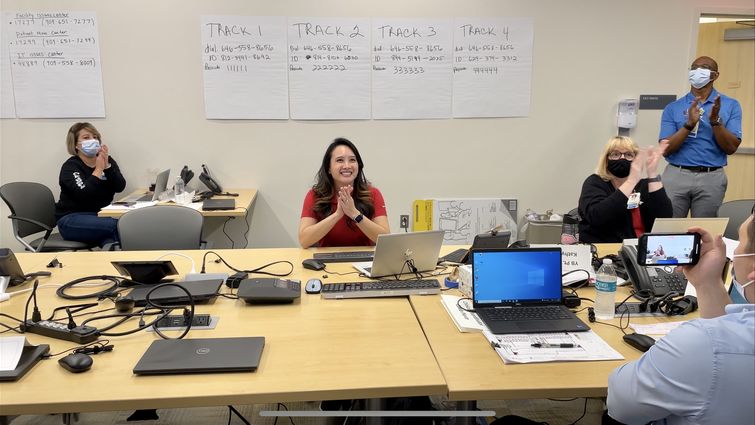 “It is an honor and privilege to support nurses’ focus on doing what they love most: caring for patients,” said Ong. “My vision for nursing leadership is to allow nurses to lead in how excellence in care is determined.”

Ong is one of 20 people selected nationally for the award, which is based on exemplary leadership proven through innovation, influence and inclusion.

In 2021, Ong exhibited these values in her role as executive director of the Campus Transformation Project. She oversaw all aspects involved in moving from the vintage hospital into the Dennis and Carol Troesh Medical Campus. Her innovative team selection – choosing individuals new to project management and operations – served the project well by bringing open-mindedness to every undertaking. Ong proved instrumental in keeping her team’s spirits high through the many challenges of the two-year project that raised a state-of-the-art acute care adult and children’s hospital.

Ong has served in various nurse leadership roles since 2013. As a nurse leadership resident at Loma Linda University Health, she led in several major projects before being named project manager at Loma Linda University Medical Center (LLUMC). In that role, one of Ong’s significant contributions was serving as a nursing champion for the Sepsis Initiative.

Now, in her current role, Ong facilitates moves, remodels and staff/office relocation while collaborating with hospital leadership on these strategic improvements to enhance excellence in care.

“Allison's commitment and sense of ownership over her responsibilities are second to none,” said Staples-Evans. “She continually impresses me in her ability to display this mentality and find ways to project her ‘ownership culture’ to others through strong organizational and communication skills in a way that translates to tangible progress and outcomes.”

Along with her fellows, Ong will be recognized at the AONL 2022 Annual Conference in April.