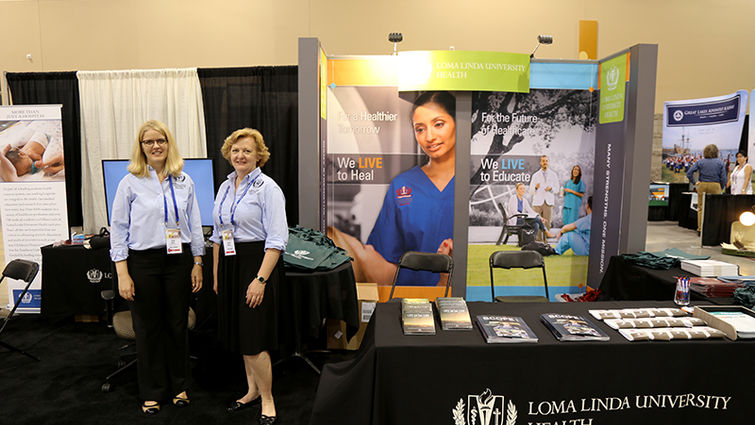 Elisa Blethen and Janya Mekelburg at the 2016 ASI convention in Phoenix, Arizona

Hot weather notwithstanding, the 2016 ASI convention—which was held August 3 through 6 in Phoenix, Arizona—provided valuable opportunities for Loma Linda University Health to share its mission, vision, and values with members of the Seventh-day Adventist Church.

ASI stands for Adventist-laymen’s Services and Industries, and the annual international convention, which is held in a different city each year, allows for the exchange of ideas vital to a variety of ministry-related objectives. As the premier educational and health sciences entity of the Adventist denomination, Loma Linda University Health has been an active convention participant since 1993.

The combination of hot daytime temperatures and high humidity may have deterred some from attending. This year’s 1,961 registered attendees represented a decline from the 2,082 who registered for the 2014 convention in Grand Rapids, Michigan. Although other guests typically show up for weekend religious services at the event, their numbers are not officially counted. In previous years, estimates for the combined total of attendees and visitors have been as high as 5,000.

An important benefit of hosting a booth is the opportunity to meet and talk with alumni, donors, and potential students on a wide variety of topics. Another is to make new friends by offering convention goers a selection of collateral materials—brochures, publications, gift bags, pens, and DVDs—designed to acquaint them with the mission, vision, and values of the organization.

A virtual reality tour of the new Loma Linda University Medical Center and Children’s Hospital proved to be a big hit with many visitors this year, especially children and teenagers. “Wow!” and “This is so cool!” were frequent expressions as visitors interacted with the technology, directing their three-dimensional view of the new hospitals through a digital headset. Many participants commented that the experience seemed so real they felt they could reach out and touch the walls.

While it can be difficult to assess the full return on investment for participating in the ASI convention year after year, there are significant benefits. Both Mekelburg and Murdoch-Zmaj highlight the importance of maintaining contact with friends and supporters.

“The opportunity to connect with alumni and others interested in Loma Linda University Health is one of the highlights of attending the ASI convention,” Mekelburg noted. “Answering questions, updating them on the exciting things happening on campus, and listening to their stories is energizing. Many of our alumni and friends say they specifically look for our booth so they can stop by for a visit.”

Murdoch-Zmaj agrees. “By hosting a booth at the ASI Convention, Loma Linda University Health is able to reach out to a core group of supporters who may not be aware of events on our campus. Engaging with the members of ASI opens Loma Linda University Health to an international network of Seventh-day Adventists who can support our vision for the future in a variety of ways.

“I was surprised,” she adds, “by how many of our booth attendees remarked that they did not know we are building a hospital. Sharing the goals of Vision 2020 is a useful way to reach out to the full spectrum of the Adventist population.”

For her part, Blethen says annual participation in the event sometimes yields immediate and tangible results. She points to something that happened when she connected with Jason Blanchard at the 2012 ASI convention in Cincinnati, Ohio.

“The Loma Linda University Health booth was next to a ministry working in Guatemala,” Blethen explains.

During slow moments, she told Blanchard about the work of Adventist Health International (AHI), a non-profit corporation headquartered in Loma Linda that upgrades and manages mission hospitals throughout Africa, Asia, and the Americas. While not officially part of Loma Linda University Health, AHI works closely with the Global Health Institute, which is.

“He seemed very interested in the work,” Blethen recalls. “I shared my experience at Malamulo Hospital in Malawi and it turns out that he had grown up in Malawi where his father worked at Matandani Adventist Mission.” Ironically, Blanchard was very familiar with Malamulo: he had his tonsils removed there when he was 5 years old.

Blanchard was intrigued by the possibility of combining mission service with health care and business management. Over the weekend, Blethen introduced Blanchard to Richard H. Hart, MD, DrPH, president of Loma Linda University Health, who told him that the administrative position had recently been vacated at Malamulo.

“In early 2013,” Blethen happily reports, “Jason, his wife Erin, and their two children, Brody and Eve, moved to Malamulo where he is still the CEO of the hospital.” 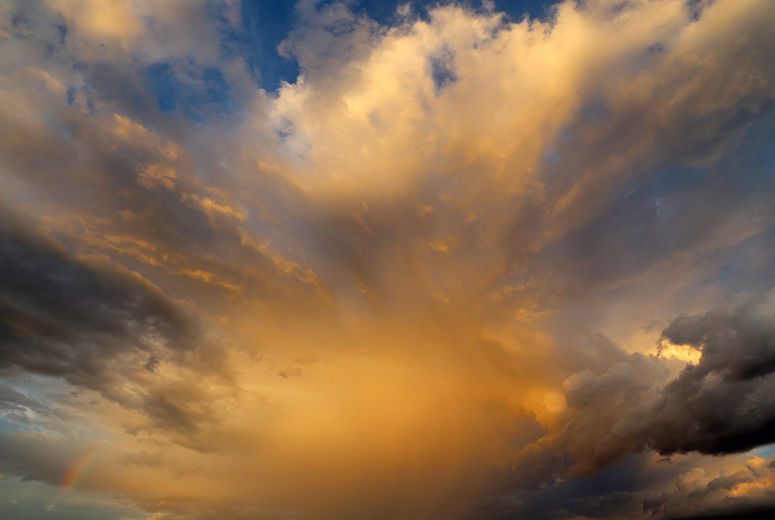 En route to the ASI convention in Phoenix, Arizona, the author encountered this glorious monsoon cloud over Quartzite.

En route to the ASI convention in Phoenix, Arizona, the author encountered this glorious monsoon cloud over Quartzite. 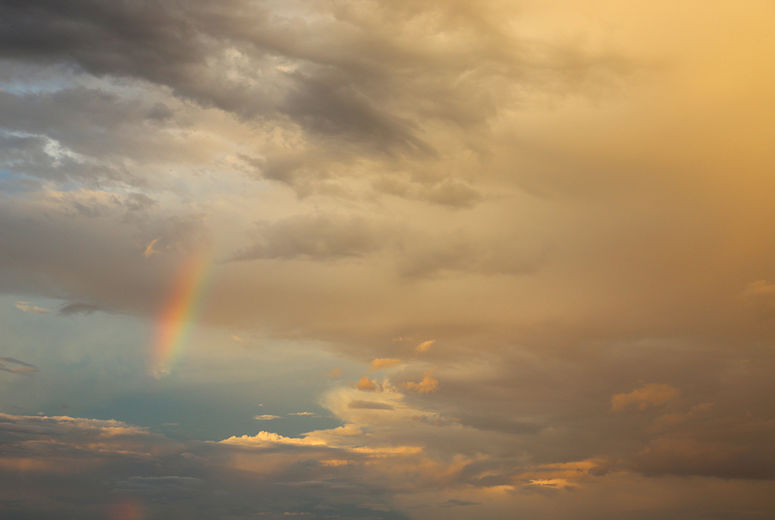 Tiny fragment of a rainbow graces the Arizona skies during the author's trip to the ASI convention.

Tiny fragment of a rainbow graces the Arizona skies during the author's trip to the ASI convention. 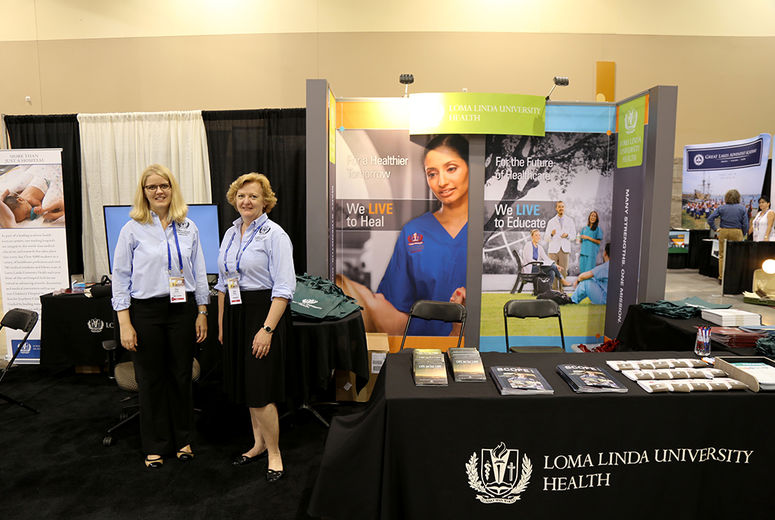 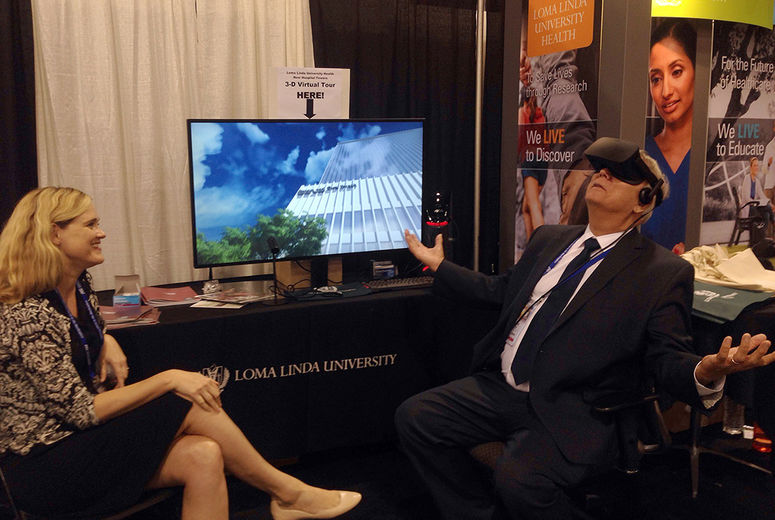 Tricia Murdoch-Zmaj laughs as James Ponder hams it up for the camera while wearing the digital headset of the virtual reality tour of the new hospital construction.

Tricia Murdoch-Zmaj laughs as James Ponder hams it up for the camera while wearing the digital headset of the virtual reality tour of the new hospital construction. 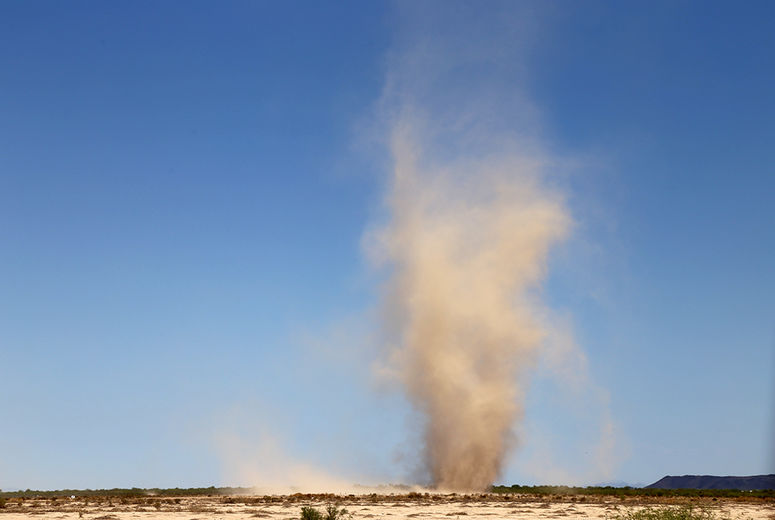 As if to highlight the extremes of summer weather in central Arizona, a dust devil churns a path between earth and sky near Vicksburg.

As if to highlight the extremes of summer weather in central Arizona, a dust devil churns a path between earth and sky near Vicksburg.