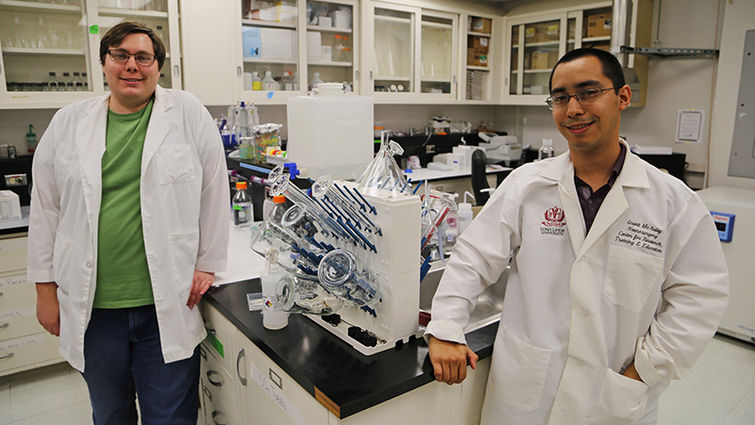 Carson Whinnery and Nick Sanchez each received $1,000 for Alzheimer’s Greater Los Angeles for their work on Alzheimer’s disease.

Carson Whinnery and Nick Sanchez, two doctoral students from the Neurosurgery Center for Research Education and Training at Loma Linda University School of Medicine, were named winners in the Alzheimer’s Greater Los Angeles 2017 Young Investigators Award program. Both Whinnery and Sanchez received a $1,000 stipend earlier this month to assist in their research projects.

Whinnery’s application focused on his research into cerebral amyloid angiopathy, and Sanchez’s highlighted the role of copper ions and oxidative stress in Alzheimer’s disease.

Wolff Kirsch, MD, director of the Neurosurgery Center and a professor in the School of Medicine, said the recognition highlights the important work both Whinnery and Sanchez are doing.

“This is a very important step in their careers,” Kirsch said. “To be recognized for what they’re doing encourages students to persist. Working in the laboratory can be a very lonely endeavor with more failures than successes. I’m glad that Alzheimer’s Greater Los Angeles has chosen to honor them in this way.”