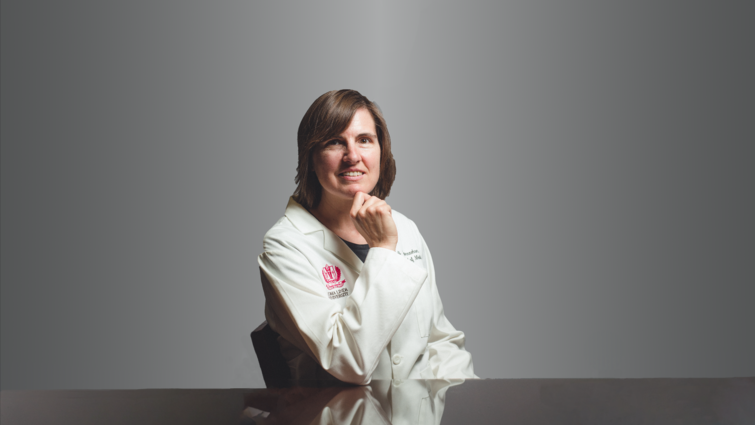 A stem cell is a primitive cell that is able to develop into a specific cell at the embryonic stage — say, skin, muscle or blood. But once the change is made, that switching mechanism is supposed to shut off.

Julia Unternaehrer, PhD, assistant professor of basic sciences at Loma Linda University School of Medicine, is working to find out why a cell’s switching mechanism can turn back on to become cancerous. Once a cell is a cancer stem cell, it can build a tumor.

The challenging part of treatment, Unternaehrer says, is that cancer stem cells are more resistant to cancer drugs than any other cancer cells. Often when a patient’s cancer goes into remission, cancer stem cells can remain and later reproduce.

Unternaehrer, a former physical therapist who earned a PhD in cell biology at Yale University and worked as a research fellow at Harvard Medical School, joined Loma Linda University Health in 2013. Her research career has focused on understanding how cancer and embryonic development relate.

One strategy she and her team are targeting is using a protein that has been found to turn DNA on and off. Called Snail, it’s one of the approximately 2,600 transcription factors of the human genome that can control how genes are activated. This transcription factor causes a process called epithelial-mesenchymal transition, or EMT — which takes place in embryonic development but is never supposed to happen again. In cancer cells, Snail triggers this dormant process and causes them to become migratory and act like stem cells.

A tumor that stays in the organ is obviously unhealthy, but it can turn deadly once its cells travel to another part of the body, known as metastasis.

Unternaehrer and her lab team have implanted ovarian tumors into mice, and the plan is to inject the mice with nano-particles loaded with RNA molecules that can turn off Snail. If this targeting is found to work in mice, then the team could eventually prepare for clinical trials in humans.

She and teammate Yevgeniya Ioffe, MD, received a $75,000 grant from the school earlier this year to study this process. They hope eliminating a patient’s cancer stem cells could stop tumors in their tracks.

“I would love to help patients have a few more good years of life,” Unternaehrer says.