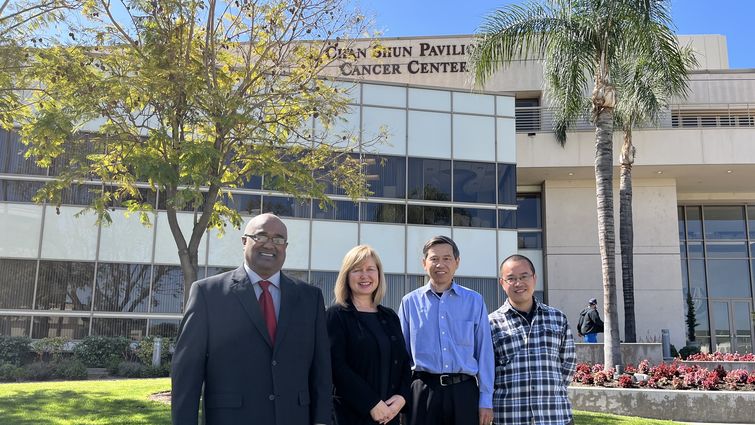 TRDRP is a state agency dedicated to eliminating commercial tobacco use and tobacco-related diseases to improve the health and well-being of all Californians; the California Prop 56 tax on cigarettes funds TRDRP’s grant program for all California researchers.

The grants cover a spectrum of the transdisciplinary and translational research endeavors at the TTRP — from basic science to clinical and public health research — says Pramil Singh, DrPH, director of the TTRP.

“We’re thrilled to receive this funding from the Tobacco-Related Disease Research Program,” Singh says. “The grants are helping us gain insights by engaging in a transdisciplinary range of projects that could serve as a basis to improve and even save lives.”

Tobacco remains the leading preventable cause of cancer death worldwide, Singh says. As one of the LLU Cancer Center programs that is important for a National Cancer Institute Cancer Center Support Grant, TTRP aims to reduce tobacco use and cancer mortality disparities in the Inland Empire and worldwide.

Now, we are beginning to show how the effects of nicotine on babies last their entire lives.Dr. Pramil Singh

Much of the TTRP’s research focuses on tobacco exposure’s impacts on the epigenome — where the body stores a record of the chemical changes to the DNA and proteins — throughout a lifetime. For example, past TTRP research has shown that babies whose mothers smoked during pregnancy grow into adulthood facing higher risks of abnormal heart, lung, and brain functions and long-term disease outcomes like neurologic disease and cancers.

“It is textbook knowledge that women smoking during pregnancy increases the risk of infant death and fetal demise,” Singh says. “Now, we are beginning to show how the effects of nicotine on babies last their entire lives.”

Daliao Xiao, DVM, PhD, a professor at the School of Medicine, received $198,000 in funds from TRDRP as an Administrative Supplement Award to continue his project, “Fetal nicotine exposure develops heart ischemia-sensitive phenotype,” which investigates the long-term effects of fetal nicotine exposure on the heart.

Xiao’s studies have already demonstrated that being exposed to nicotine as a fetus increases the risk of the child’s heart dysfunction in later life. This project, he says, searches to understand molecular mechanisms driving such epigenetic changes affecting the heart. The research involves using an animal model of nicotine-treated pregnant rats and monitoring the hearts of their offspring to observe whether nicotine exposure during pregnancy could modify cardiac AT2R gene expression.

“Understanding the mechanism driving how nicotine exposure during pregnancy modifies cardiac gene expression is of fundamental physiologic importance in its own right,” Xiao says. “But it also yields clinical relevance for improving cardiac function and reducing nicotine-induced cardiovascular disease.”

Xiao will also serve as a mentor for Yong Li, an LLU postdoctoral student launching a project, “Fetal E-cigarette exposure reprograms miR-30c/Neurod1 axis and exaggerates neonatal ischemic stroke,” that earned $180,000 in funds from TRDRP as part of a Postdoctoral Fellowship Award. This project will use an animal model to investigate whether and how exposure to electronic cigarettes (e-cigarettes) during pregnancy affects unborn babies' brain development, leading to an increased risk of stroke in newborns.

E-cigarettes are electronic nicotine delivery systems that have gained traction in the global market in the past decade. Xiao says that the use and abuse of e-cigarettes have since become more popular than conventional cigarettes among youth and young pregnant women. Learning more about the adverse effects of e-cigarette use by mothers on the brains of their unborn babies can bear crucial public health impacts for therapeutic targets, prevention, and treatment of e-cigarette-induced strokes in newborns, Xiao says.

With these funds, we will be able to engage women, healthcare providers, and community health workers in developing a program that will enhance Loma Linda University Health’s legacy of creating safe and supportive environments for pregnant women to quit and stay quit.Dr. Anne Berit Petersen

The project will develop and test a novel model of low-cost tobacco cessation intervention for pregnant mothers and address tobacco-related health disparities in maternal health by involving community health workers (CHWs) in the cessation intervention process. CHWs are public health workers that help connect communities with their health care systems. The program will hire CHWs, including those trained at San Manuel Gateway College, to connect with willing patients through an initial in-clinic visit, followed by virtual or home visits to help mothers quit smoking during pregnancy.

Petersen says this project draws from practices and evaluations of a prior state-funded maternal tobacco cessation program — the largest in the county — that was active at Loma Linda University Children’s Hospital for seven years (2012-2019) before funding ceased.

“I am excited about the opportunity this grant creates for us to come alongside this vulnerable population in our local community and build on the lessons learned from LLUCH's maternal smoking cessation program,” Petersen says. “With these funds, we will be able to engage women, healthcare providers, and community health workers in developing a program that will enhance Loma Linda University Health’s legacy of creating safe and supportive environments for pregnant women to quit and stay quit.”

Petersen says that findings from this formative research and pilot testing could contribute to shaping more effective, scalable, and replicable models for maternal tobacco cessation programs throughout the state.

Singh, the TTRP director, says all three TRDRP grants allow TTRP to provide a critical set of pilot data that the team hopes to use as a basis for further funding of large-scale trials and conclusive results with far-reaching impacts.