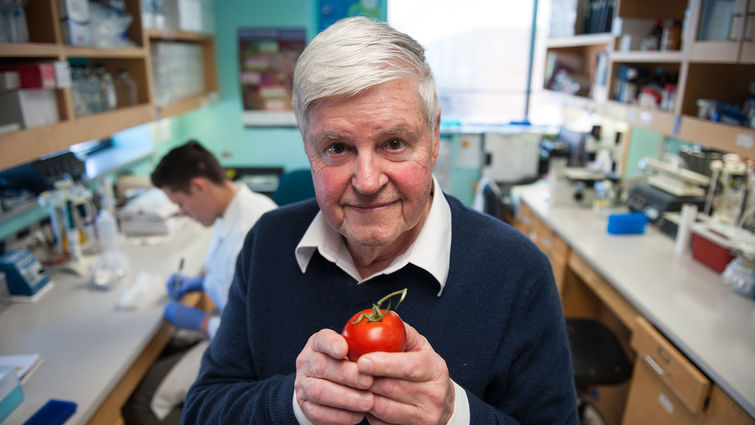 William Langridge is a professor of biochemistry at the Loma Linda University School of Medicine. (photo by Ansel Oliver)

The biochemistry professor at Loma Linda University Health believes most people would rather eat a tomato than take a shot in the arm. In an article published in the December 2006 Scientific American, he made the case for edible vaccines to prevent infectious diseases. For the last decade, however, he has set his sights on AD instead.

Langridge says the fruits of his earlier research — tomatoes and potatoes that synthesize vaccines — are every bit as applicable in the battle against AD. Edible vaccines are inexpensive, easy to transport and can be stored at room temperature compared to traditional vaccines, which require controlled conditions difficult to maintain in parts of the world without refrigeration.

What’s more, edible vaccines produce fewer side effects and are friendly to children, who might prefer eating a tomato instead of taking a needle in the shoulder.

The number of recognized autoimmune diseases has blossomed in recent years from a handful a decade ago to more than 100 today, Langridge says.

According to the American Autoimmune Related Disease Association, 50 million Americans suffer from AD, which the organization says includes such well-known conditions as rheumatoid arthritis, irritable bowel syndrome, multiple sclerosis and type 1 diabetes. Langridge says AD ranks among the top 10 killers of children, men and women in all age groups in the developing world.

To stop AD in its tracks, he’s taking the opposite approach from his earlier attempts to prevent infectious diseases.

The new enemy, of course, is AD. It causes the body to use its immune system to commit suicide. “Can you think of anything in biology that is crazier?” he asks.

For the past decade, he and his team have been developing edible plants that produce multicomponent vaccines called Cholera Toxin B autoantigen fusion proteins that inhibit immune-cell activation, and thereby prevent the body from destroying its own organs and tissues.

One of the first diseases Langridge targeted in his earlier research was rotavirus, which causes an intestinal infection the World Health Organization says killed more than 200,000 children in 2013 alone.

He says his team’s edible vaccine was found to be effective in preventing rotavirus in mouse pups, but the idea of eating modified food wasn’t popular with the public. Too many were nervous about eating plants containing recombinant DNA.

Langridge is optimistic, however, that as AD continues to expand, popular reluctance can be overcome.

“There is no evidence that anyone has been harmed by eating genetically altered plants, but the fear persists,” he says. “If we’re able to show how this will help, I’m confident people will change their minds.”

“We are a lot cleaner people than ever before,” he says, “with all the increased cleaning of eating surfaces, washing of hands and antibiotic soaps.”

In previous generations, when the majority of Americans lived on farms and had daily interactions with animals, people were exposed to all kinds of germs early in life that they seldom or never encounter today. As a result, their immune systems developed robust immune responses and memory cells that could quickly proliferate and eliminate many diseases and germs in childhood.

But with today’s zealous cleanliness, the immune system may fail to develop an appropriate immune response to pathogens early in life. The result is what Langridge terms “a confused immune response when encountering self-proteins that resemble pathogen antigens later in life.” The downside is that today’s humans appear to be falling prey to a plethora of crippling autoimmune disorders unknown to their ancestors.

Langridge’s current research is focused on vaccines to prevent the onset and progression of type 1 diabetes. Once the mechanism underlying the immune response is fully understood, it will be tested in diabetes patients and the strategy applied to developing vaccines for other, similar forms of AD.

“We are about 70 percent of the way to completely preventing onset of this disease and about half way to applying the fusion protein vaccine to those with early onset type 1 diabetes inflammation,” he reports.

The FDA wants to be certain the vaccines Langridge and his colleagues develop are both safe and effective before authorizing their use in human trials.

In the meantime, Langridge has a couple of suggestions for people who want to improve their immune system health.

“If you are young,” he counsels, “get outside and play in the dirt. If you’re not, get a pet. Either way, stop using antibacterial soaps!”

“If he achieves the result he’s looking for,” Samardzija says, “it will be immensely significant to so many who suffer from AD.”