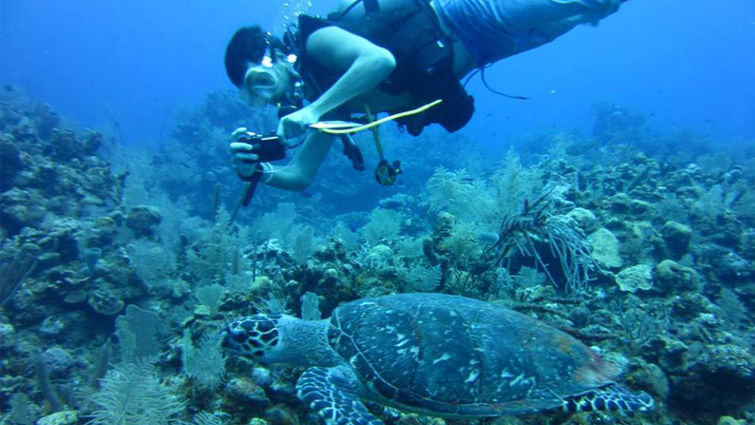 PhD student and researcher Dustin Baumbach swims along side a sea turtle subject to photograph it. Baumbach and his professor Stephen Dunbar, PhD, have developed an app, that debuted in early April and is available on Android and Apple iPhone smartphones

Now a new app can turn people with smartphones into agents of science by allowing them to document sea turtles they spot anywhere.

Sea turtles continue to travel immense distances across the world's oceans, as they have from ancient times, filling extremely important roles in the balance of marine habitats and marine ecosystems; sea turtles help maintain the health of sea grass beds and coral reefs.

While researching sea turtles in Roatán, Honduras, in 2014, a Loma Linda University professor and his doctoral student discussed the idea of developing a smartphone app that people around the world could use to upload photos and information about turtles that could actually help sea turtle conservation researchers.

Loma Linda University School of Medicine department of earth and biological sciences (EBS) professor Stephen Dunbar, PhD, has been studying sea turtles for the past nine years in Roatán and Utila, islands off the coast of Honduras.

Dustin Baumbach, one of his PhD students, has been part of his research team studying endangered sea turtles.

“We saw the need for people to be a part of the scientific process – to link up with us as researchers and become citizen-scientists,” Dunbar said.

“So I set out to develop the app, myself,” explains Baumbach.

The app, named TURT (Turtles Uniting Researchers and Tourists), developed by Baumbach and Dunbar, consists of a mapping system that allows scuba divers, snorkelers, and beach-going tourists to upload photographs and information about the turtles they’ve just seen.

This is the first and only smartphone app available that can map sightings and photograph sea turtles seen anywhere in the world, and debuted on April 4. The app is available for both Android smartphones and Apple iPhones.

Information captured by users of the app-- photos, comments and observations, weather conditions, date/time stamps, and location information-- are uploaded to a worldwide database, where researchers and conservationists can retrieve the information to analyze trends and sightings hotspots, and assess species distribution.

Dunbar’s non-profit organization, Protective Turtle Ecology Center for Training, Outreach, and Research, Inc. (ProTECTOR Inc.), has a mission of ensuring the conservation, protection and management of all sea turtle species found in the waters of Central and North America, with special emphasis on Honduras, through educational outreach, ongoing training, and scientific research.

Dunbar formed in 2006, in part, to facilitate a positive working relationship between Loma Linda University and the government of Honduras.

Collaboratively, the program has involved six graduate students from the Loma Linda University School of Medicine department of earth and biological sciences and approximately 18 interns and volunteers, along with in-country participants.

The organization was also formed because of the need for research on sea turtles in the region, and that research, linked with educational outreach and community involvement, can strongly influence management decisions about these valuable marine residents.

ProTECTOR Inc. oversees a number of sea turtle research and outreach projects in Honduras, with the aim of facilitating better decision-making for marine area management, as well as awareness of sea turtles on the part of both local residents and the visiting public.

“Human activities have tipped the scales against the survival of these ancient mariners,” said Dunbar. “Nearly all species of sea turtle are classified as threatened or endangered.

He continues, “Slaughtered for their eggs, meat, skin and shells, sea turtles suffer from poaching and over-exploitation. They also face habitat destruction and bycatch or accidental capture in fishing gear, shrimp trawl nets, on longline hooks and in fishing gillnets, which has been increasing in recent years.”

Dunbar continues, “Climate change has an impact on turtle nesting sites, as well. It alters sand temperatures, which may then affect the sex of hatchlings.”

Inventor and developer Baumbach has big plans for the next-generation of the TURT app.

“Upgrades to the app will include the ability to upload multiple photographs simultaneously, as well as possibly having the ability to support photo identification,” Baumbach shares. “To have developed something that will create a large scale group of citizen-scientists, while at the same time contributing to the conservation of several endangered sea turtle species, is a dream come true.”

Learn more about the TURT app