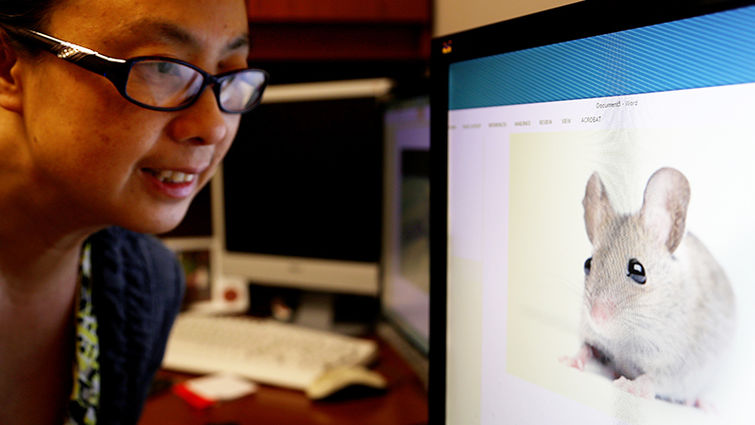 Except for a photograph of a mouse on her computer screen, the scientist who sends mice into space doesn’t keep any of the furry rodents inside her office in the Chan Shun Pavilion at Loma Linda University Health. She does, however, have an interesting story to share.

Her name is Xiao Wen Mao, MD, but since that can be challenging for Westerners to pronounce, she introduces herself as Vivien Mao.

Next June, Mao will participate in an experiment that will send mice into space orbiting the Earth. The furry subjects will take off from Kennedy Space Center in Florida where they will hitch a rocket ride just beyond the stratosphere and into low earth orbit.

The mice will enjoy a 30-day, all-expenses-paid vacation aboard the International Space Station (ISS) thanks to a $750,000 grant she recently received from the National Aeronautics and Space Administration (NASA). When the rodents return, Mao and other investigators will evaluate how they held up under spaceflight conditions.

“My interest is in the eye,” she notes. “Thirty percent of astronauts experience vision problems either during their time on the ISS or after they return to Earth, sometimes for as long as six months later. Scott Kelly returned with blurred vision and other astronauts have reported similar issues. My goal is to study the mechanism that causes these problems.”

Mao reports that earlier studies by other researchers have focused on microgravity, the reduction in gravitational forces that results in the weightlessness perceived during spaceflight. She, however, suspects that radiation may also play a role in missions that extend beyond Earth’s orbit and the Van Allen radiation belts, such as astronauts would encounter on a mission to Mars or the moon. Her experiments will study the effects of both microgravity and radiation.

She hopes her findings will lead to new cures or treatments for spaceflight-induced vision problems as well as more Earthbound disorders, such as age-related macular degeneration and retinopathy.

Mao was a practicing physician in Shanghai, China, before coming to Loma Linda University School of Medicine in 1992 to study and conduct research in the department of radiation medicine at the James M. Slater, MD, Proton Treatment and Research Center. She found the field fascinating, and stayed on, joining the faculty in 2003. In 2013, she was appointed associate research professor in the department of basic sciences.

Back here on the blue planet, Mao says her kids find her NASA research intriguing.