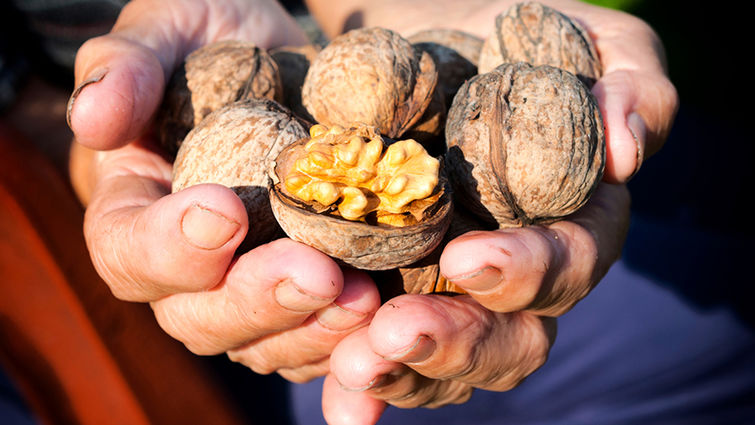 Edward Bitok, DrPH, RDN, now an assistant professor of nutrition at the LLU School of Allied Health Professions, was a graduate student at the School of Public Health at the time the two-year study was conducted. The study’s findings were incorporated into his doctoral thesis.

Bitok says the goal of the study was to assess what happens to the overall nutrient profile when independent adults on self-selected diets incorporate a noticeable amount of walnuts into their diet.

Joan Sabaté, MD, DrPH, director of the Center for Nutrition, Lifestyle and Disease Prevention at the School of Public Health, has been researching walnuts for decades. Among his findings: that daily walnut consumption reduces serum cholesterol in seniors, that walnuts are high in an omega-3 fatty acid that improves neuron function, and that they contain anti-oxidants and phytochemicals with anti-aging effects. “We hypothesize that walnuts may have a favorable effect in delaying the well-known age-related cognitive decline among elderly people,” Sabaté said.

Bitok notes that the act of incorporating walnuts into the daily diet is a simple strategy for addressing declining nutrient intake in older adults. He also says walnuts promote cardiovascular health without any adverse effects on body weight.

In the study, 317 participants were randomly assigned to one of two groups: the walnut group and the no-walnut group. Participants in the walnut group were provided with 1 to 2 ounces of packaged walnuts per day and asked to incorporate them into their diet. “They were not given any other dietary advise, nor provided recipes,” Bitok said.

Participants in the second group were instructed to refrain from eating walnuts for the entire study period. The diet of participants in both groups was assessed periodically during the study.

When results were analyzed, Bitok and his colleagues learned that participants who ate walnuts reported significantly higher dietary intake of total protein, vegetable protein, polyunsaturated fatty acids and omega-3 fatty acids. Participants in the group that did not eat walnuts were found to have consumed significantly more carbohydrates, saturated fats, sodium and animal protein. The two groups did not differ significantly in the intake of dietary calcium, zinc, potassium, folate or vitamins B6, B12, E and D.

Bitok also noted that because of the large amount of data generated by the study, it is estimated that it will take a few months before researchers are able to say whether they found a link between walnut consumption and improved cognitive and retinal health.

“We believe these benefits are made possible by the versatility of walnuts, since they can be enjoyed alone or with a variety of foods such as salads, smoothies, dairy and desserts,” he said.