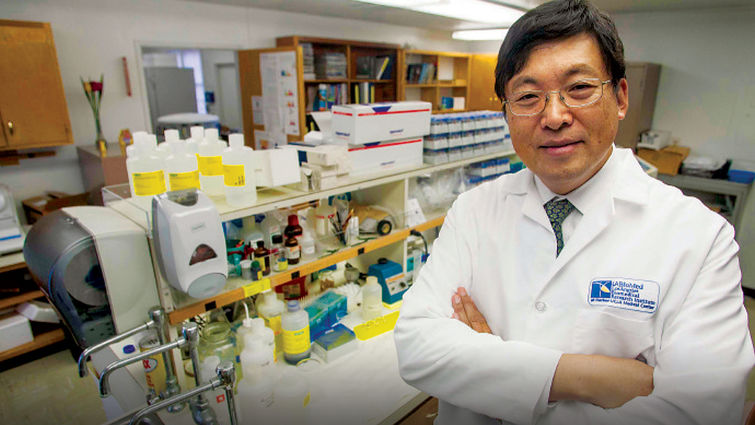 Yutaka Niihara, MD, an alumnus of the School of Medicine, has received FDA approval for a new treatment for sickle cell disease. Photo by Robert Casillas / Staff Photographer of The Daily Breeze.

A new medication to treat symptoms of sickle cell disease, developed following 25 years of research by a Loma Linda University School of Medicine alumnus, has received approval from the U.S. Food and Drug Administration, the first new drug for the condition to receive FDA approval in nearly 20 years.

According to Yutaka Niihara, MD, MPH (SM ‘86), the new drug, known as Endari, significantly reduces the symptoms experienced by people with sickle cell disease. And while previous treatments could be given only to adults, Endari is also the first medication approved by the FDA for children as young as 5 years old.

Sickle cell disease, which predominately affects African-Americans, Latinos and other minority groups, is an inherited lifelong disorder in which red blood cells that are normally round and disc-shaped are instead crescent or sickle-shaped due to abnormal hemoglobin. The malformed blood cells lose flexibility and become adhesive to blood vessel walls, causing blockages in blood flow to organs or tissues.

“This leads to death of tissue surrounding these small blood vessels, much like stroke or heart attack and causes pain crises — intense bouts of pain — that send many patients to emergency rooms,” Niihara said. “I saw how much this disease debilitated people and prevented them from everyday activities that most of us take for granted. The severity of pain they experience can be difficult to for others to understand, often being misunderstood even by medical providers. After starting to realize what they are going through and not being understood, I felt compelled to become their advocate.”

Endari therapy reduces damage to sickle red blood cells. This leads to decreased stickiness and less cell rigidity, making the transit through small blood vessels easier. Throughout the test phase Endari has shown minimal side effects, most of which can be managed through over-the-counter medications.

It was during his medical school years that Niihara developed his interest in medical research.

“I became fascinated with oncogenes, genes that lead to cancer, and that led me to a hematology/oncology fellowship,” Niihara said. During that fellowship, Niihara met many sickle cell patients and saw the pain caused by this devastating disease. “After seeing the suffering that these sickle cell patients had to bear, I decided to do research in this field,” he said.

While Niihara believed he wasn’t good enough to be a researcher, he became inspired by Loma Linda University faculty members Shiro Kunihira, Lawrence Longo and others.

“Eventually, many years after graduation from Loma Linda, when there was an opportunity to get involved with research, their words and examples gave me the courage to at least try,” Niihara said. In fact, those mentors Niihara found at the School of Medicine inspired a 25-year quest that eventually led him becoming a clinical professor of medicine at the UCLA David Geffen School of Medicine and chairman and CEO of Emmaus Life Sciences.

“I am grateful to my mentors,” Niihara said. “I am also grateful to the team at Emmaus Life Sciences, and the many researchers and sickle cell patients who participated in clinical trials.” Niihara’s research is considered one of the largest scale studies for sickle cell disease, covering 31 major sickle cell centers in the United States.

With FDA approval in hand, Endari’s target launch is slated for November. Niihara and his team are reaching out to medical providers, patients and sickle cell support groups to educate them about the treatment and readying manufacturing and distribution channels.

“It’s an exciting time, but one of intense activity,” Niihara said. “We are all motivated by the desire to get the drug to market so that patients will be able to be treated.”