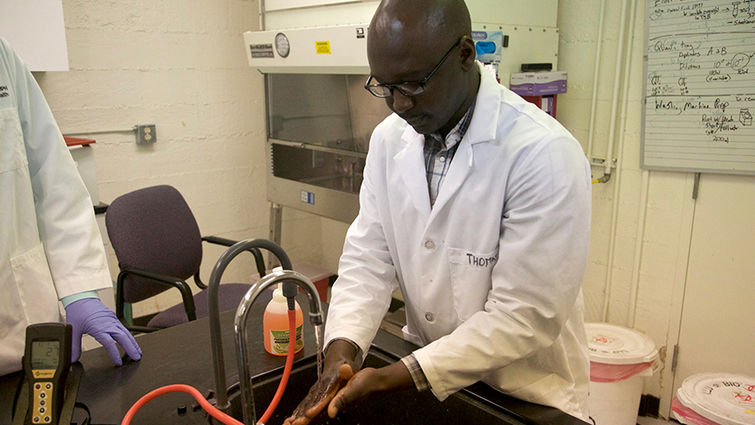 Wondering what you can do to avoid the flu?

If so, you’re not alone. A recent Los Angeles Times article reports the 2017-2018 influenza season could turn out to be one of the worst in decades and has proven especially dangerous to children and people over the age of 65.

“Washing your hands with soap and water regularly is the best way to avoid transmitting the flu,” Sinclair said.

To prove his point, Sinclair asked Thomas Hile, his research assistant, to hold out his hands. Hile complied, turning them palms up to allow Sinclair to wipe his fingertips and palms with a cotton swab.

Sinclair inserted the swab into a machine called a luminometer, which counted down 15 seconds and reported a relative light unit (RLU) reading of 973. The amount of light generated by the test is directly proportional to the amount of adenosine triphosphate, (ATP) present. ATP, in turn, is an indicator of total biological contamination.

“That translates to about 2,900 bacteria on his unwashed hands,” Sinclair said.

When Hile, who is pursuing a PhD in biology at the LLU School of Medicine, was asked what he had been doing before the experiment, he said he had only been using the computer and checking his phone.

Sinclair next asked Hile to wash his hands under running water without soap. This time, the luminometer came back with a reading of 181 RLUs, which Sinclair said represents approximately 500 bacteria. In other words, his hands washed with only water were six times cleaner than when unwashed.

The flu, of course, is caused by viruses, not bacteria, but Sinclair points out that the washing process causes viruses as well as bacteria to release their hold on the surface of hands and wash away.

For the final part of his experiment, Sinclair instructed Hile to wash with soap and water. The soap selected was a simple hand soap, not an antimicrobial or antibacterial product. Sinclair prefers simple soap for two reasons. First, he says antimicrobial soaps are no more effective at reducing household germs than plain old hand soaps. Second, he says animal studies show some of those antimicrobial additives might interfere with the human endocrine system.

After Hile scrubbed his hands with water and soap, Sinclair took his final swab sample. Fifteen seconds later, the luminometer flashed a reading of 27 RLUs, or approximately 81 bacteria.

“What that means is that washing your hands with plain soap and water can remove more than 99 percent of bacteria,” Sinclair said. “Wash your hands!”