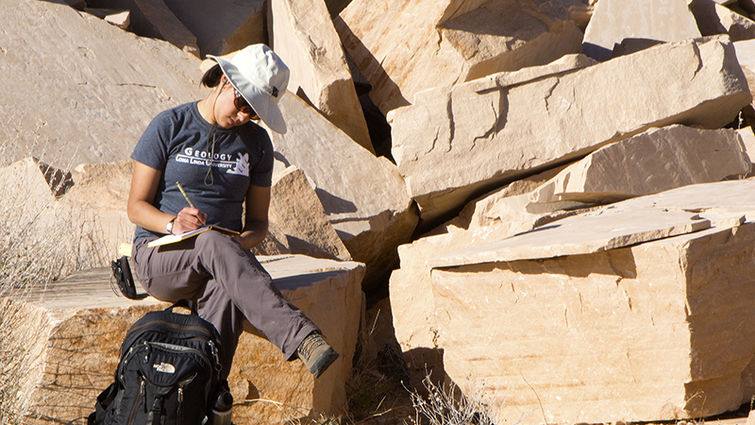 Sarah Maithel, the Loma Linda University graduate student who may know more about Coconino Sandstone than anyone else in the world, sits on a pile of the buff-colored stone to annotate her findings.

On the third and final day of a geology field trip to Arizona, Sarah Maithel pivots cautiously on her perch 80 feet up a steep hill on the outskirts of Ash Fork to ask a bystander whether a Tarantula Hawk that was buzzing her head a moment ago has landed on her clothing.

Her cautious movements belie the urgency of the situation. The two-inch wasp with iridescent blue-black body and burnt orange wings is capable of inflicting the second most painful insect sting in the world. Maithel would like to avoid that if she can.

From 80 feet away, the bystander sees something dark and suspicious on the back of Maithel’s tan-colored hat. But when Maithel gingerly removes her headgear, the form turns out to be the knot that holds her chinstrap in place. The wasp, apparently, has gone off to hunt tarantulas.

Maithel—who has acquired the nickname “Sandstone Sarah” on this trip—breathes a sigh of relief and returns to the task of collecting specimens and taking measurements of the buff-colored slabs that cover the hill.

Despite her unassuming demeanor, the 26-year-old doctoral candidate in geology is considered by her major professor to be one of the world’s foremost authorities on the substance and nature of Coconino Sandstone.

“Very few scientists are studying the Coconino Sandstone,” observes Leonard Brand, PhD, professor of biology and paleontology at Loma Linda University School of Medicine. “Sarah is doing detailed study of the formation that goes beyond what I have seen in the published literature.”

Brand states that Maithel’s qualifications derive from the fact that she has spent more time researching the sedimentary rock both on-location and in the laboratory than, perhaps, anyone else in the world. Maithel modestly protests, insisting there are “a few others” who know as much about Coconino Sandstone as she does. Regardless, Brand describes her approach to collecting, analyzing, and interpreting data as “meticulous.”

While there are many sandstone formations in the world, Coconino is primarily exposed in northern Arizona. There are numerous deposits here in the vicinity of Ash Fork—which bills itself as “The Flagstone Capital of the World”—as well as outcrops near Seligman, Holbrook, and a few other Arizona locations. Looking north from the South Rim of the Grand Canyon, the Coconino Formation is the light-colored third layer down from the top. Geologists believes the deposits are sand dunes hardened into stone.

Maithel would like to continue studying Coconino Sandstone after she graduates with a PhD degree in 2017, and hopes to launch a teaching career at the collegiate or university level. Right now, she is gathering evidence to help her understand the specific fine-scale processes that deposited the cross-bedded layers. Her goal is to make a significant contribution to science’s understanding of the enigmatic stone.

“I’m working on part of the puzzle,” she explains. “I don’t expect to be the last person to work on it or the one to have the final word on Coconino Sandstone. I’m hoping my research will help us better understand the specifics of how it was deposited, which is what we need in order to create a realistic model.”

Research into Coconino Sandstone has become somewhat controversial in recent years. While early authors suggested that the sandstone is an eolian—or wind-blown—dune deposit, contemporary workers have shown that some of its characteristics may not support that model. Maithel says more study is needed.

“I think the best approach for this research is not to look for quick answers,” she maintains. “Instead, it is to actively collect, analyze, and interpret the data. Understanding it will allow us to move toward the development of a comprehensive model for this sandstone.”

In her work, Maithel quite literally gets down to the nitty gritty of laboriously measuring individual grains of sand. “I’ve measured more than 6,000 grains so far,” she reveals.

To measure the grains, Maithel photographs extremely thin slices of sandstone—a scant 30-microns in thickness—mounted on glass slides under a microscope. She has spent hundreds of hours squinting at these thin-section photos and measuring individual sand grains. It isn’t too hard to imagine she won’t be heartbroken when this tedious part of her project is complete.

“My purpose in describing the sand grains is to try to understand the question of how they were deposited in the cross beds,” she points out. “I’m most interested in individual grain sizes as well as in the distribution of grains by size within outcrops, which may help me to develop depositional models.”

To the untrained eye, a typical outcrop, like the one at the abandoned quarry where Maithel is working this morning, resembles a series of tilting slabs, or beds, of rock. The color can vary substantially from one site to another in shades of white, gray, salmon, orange, pink, brown, or yellow.

As she talks, Maithel grabs a sketchpad and diagrams the mechanics of sand dunes, drawing a long, low-angled line across the page from right to left. “That’s the windward side,” she says. “It’s also called the stoss slope.”

In the drawing, the stoss slope appears much longer than the other side of the asymmetrical dune profile, which she terms the “foreset.”

“When a current of air or water flows over a dune,” she explains, “grains move up the stoss slope until they get discharged over the crest and deposited on the foreset slope.” She explains that the crest is the topmost point of the dune, the place where the upward-facing stoss slope meets the down-current slope, or foreset.

“In most cases,” she goes on, “cross beds are thought to be preserved foreset dune deposits. I’m trying to understand how the cross beds were deposited.”

When Maithel first began researching Coconino Sandstone in her undergraduate days, she had a basic understanding of how the dunes were deposited, but since starting her doctoral program at Loma Linda University four years ago, she has come to appreciate the importance of smaller-scale processes.

Maithel explains that when grains fall onto the upper part of the dune foreset, the process is called grainfall. “The grains accumulate until they reach an angle called ‘the angle of repose,’ about 30 to 34 degrees,” she adds. “They generally don’t accumulate past that angle. When they try to, they slide downslope in a ‘grainflow.’

“In addition to grainfall and grainflow, migrating ripples can also deposit sediment on dunes,” she continues. “Grainfall, grainflow, and ripple migration would create different kinds of deposits with different angles, textures, and structures. If we can understand the nature of these deposits, we can better interpret crossbedding in the Coconino Sandstone.”

As Maithel finishes her sentence, Brand ambles over from another site, perhaps a hundred yards away, where he has been documenting a series of tiny footprints imbedded in the sloping stone.

“Time to go,” he announces. “We’ll stop in Seligman for lunch and then head back to Loma Linda.”

On the way to the car, Maithel reveals the motivation that drives her unlikely passion.

“I find it interesting to study something in which a lot of the data does not support the conventional model,” she reports. “That brings its own challenges, but it excites me about the importance of this research. It further reminds me of the need to develop better interpretations of these deposits.”

When she completes her dissertation next year, Maithel hopes it will form a strong new link in the quest to understand the secrets of Earth’s history buried, as they are, in the sandstones of time. 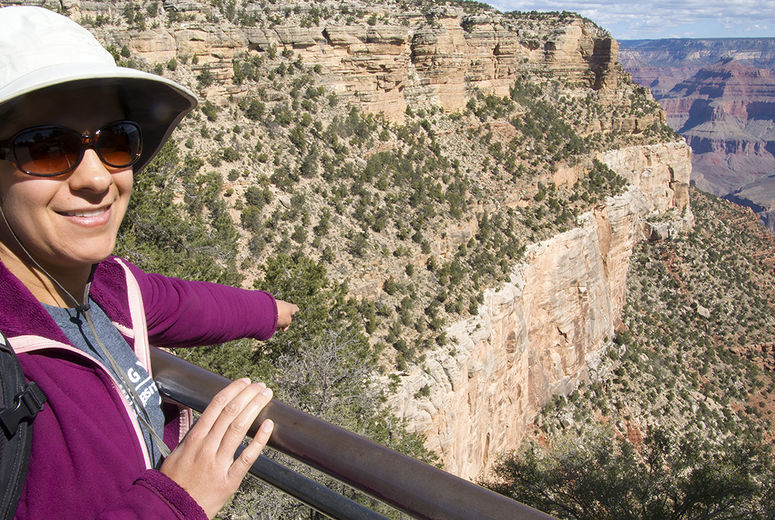 Sandstone Sarah points to the buff-colored Coconino Sandstone layer at the Grand Canyon. Ten miles distant, the same stratum is visible just below the North Rim.

Sandstone Sarah points to the buff-colored Coconino Sandstone layer at the Grand Canyon. Ten miles distant, the same stratum is visible just below the North Rim. 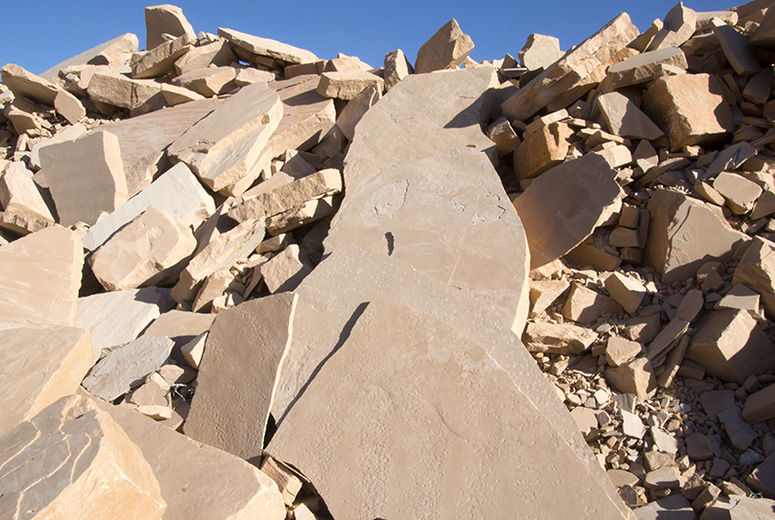 Fragments of Coconino Sandstone in an Arizona quarry. Intricate patterns adorn the faces of the large pieces in the foreground, remnants of ancient geological mysteries.

Fragments of Coconino Sandstone in an Arizona quarry. Intricate patterns adorn the faces of the large pieces in the foreground, remnants of ancient geological mysteries. 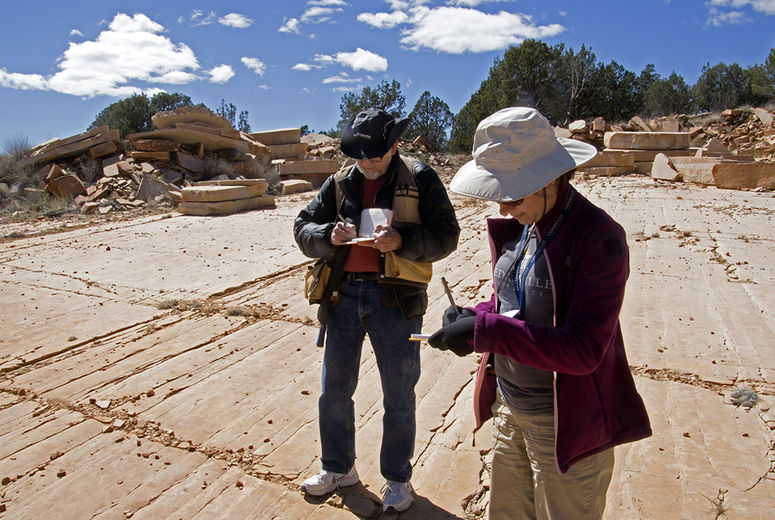 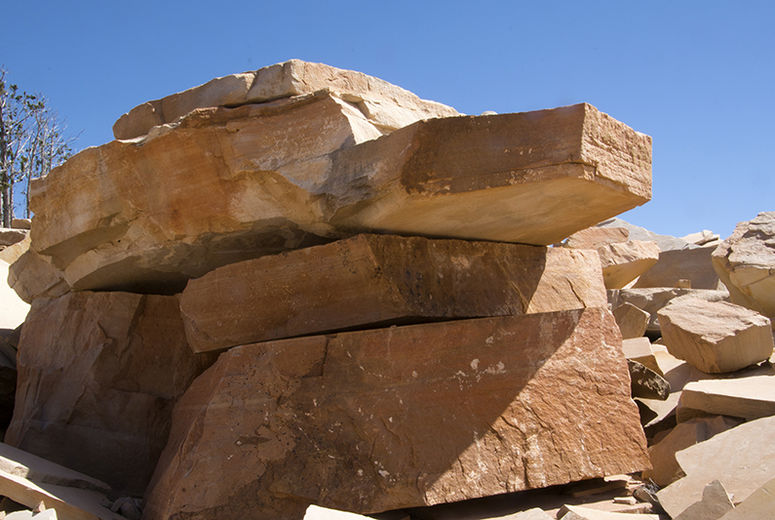 Thick slabs of Coconino Sandstone in a quarry near Ash Fork, Arizona, resemble a military tank. The stone is highly valued for use in homes, offices, and commercial spaces.

Thick slabs of Coconino Sandstone in a quarry near Ash Fork, Arizona, resemble a military tank. The stone is highly valued for use in homes, offices, and commercial spaces. 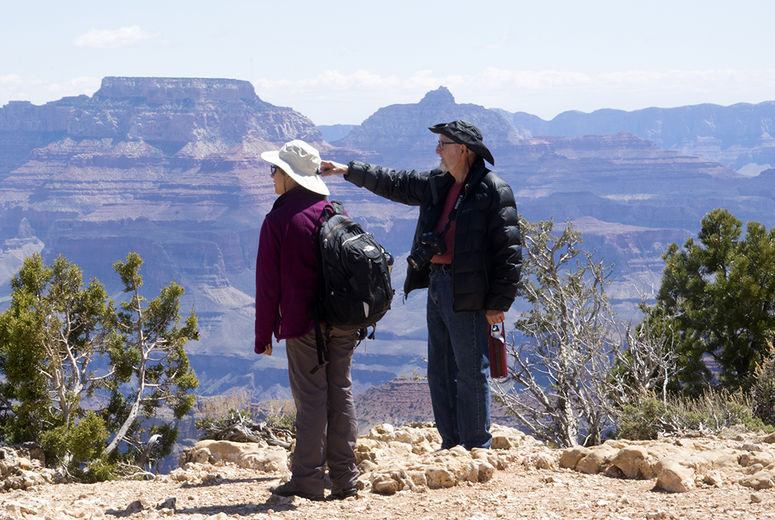 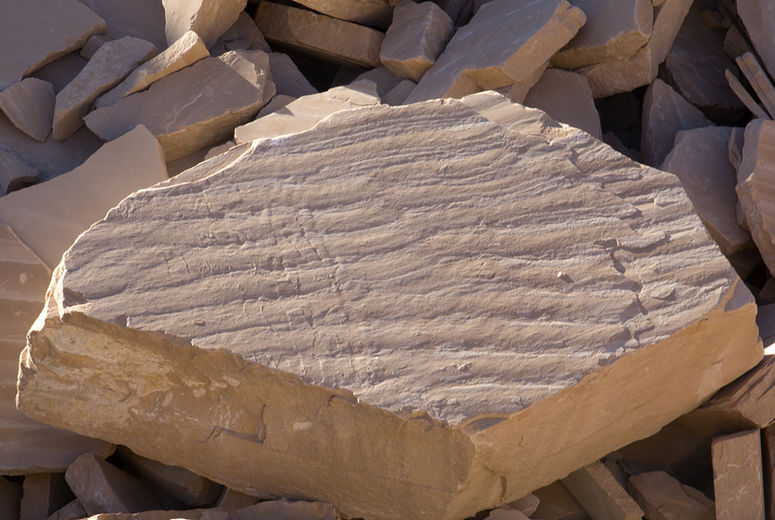 Coconino Sandstone occurs in many colors and assumes many forms in northern Arizona. This ripple pattern showcases the beauty and elegance of the stone.

Coconino Sandstone occurs in many colors and assumes many forms in northern Arizona. This ripple pattern showcases the beauty and elegance of the stone. 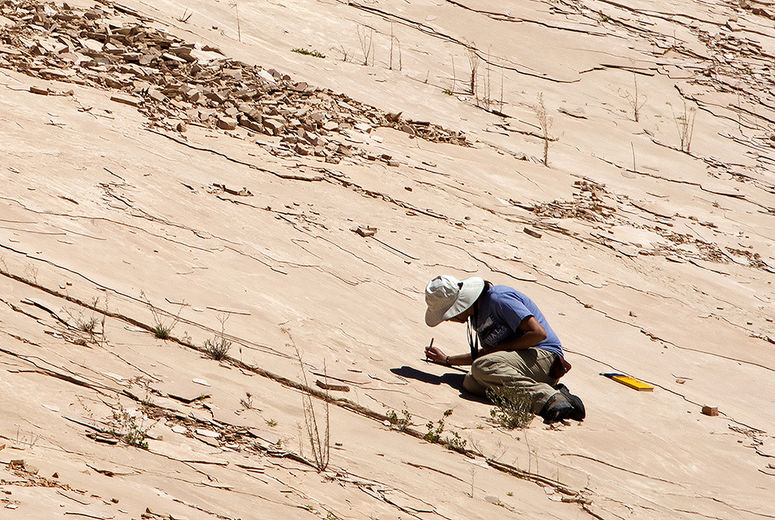 Geological field research may sound glamorous, but as Sarah Maithel can attest, it involves long hours of painstaking work. Even so, she loves the entire process.

Geological field research may sound glamorous, but as Sarah Maithel can attest, it involves long hours of painstaking work. Even so, she loves the entire process.