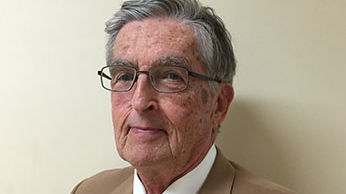 Loma Linda University researcher Gordon G. Power, together with a team of researchers from several other universities, has received a patent from the U.S. Patent and Trademark Office for the use of nitrite salts to treat specific cardiovascular conditions. The discovery was made through ongoing research and with government support under Grant Nos. HL58091 and HL70146, awarded by the NIH.

The patent was awarded for methods that include the treatment of patients with pulmonary hypertension by inhaling a therapeutically effective amount of sodium nitrite in order to decrease pulmonary artery blood pressure due to the vasodilatory effects of nitrite on the blood vessels in the lung. Its unique feature is that the sodium nitrite is inhaled as an aerosol thereby confining its effects to the lungs and avoiding side effects from systemic actions. Currently Phase II clinical trials have been undertaken as a step toward evaluating its safety before FDA approval can be sought for its clinical use.

The last two decades have seen an increase in understanding of the critical role of nitric oxide and its metabolites as blood vessel dilators that contribute to the regulation of blood flow and oxygen delivery to the body. Nitric oxide, which is produced by enzymes in the blood vessels, can be oxidized to nitrite. Although nitrite was once considered to be an inactive metabolic end product of nitric oxide metabolism, it is now known to be an effective vasodilator.

These discoveries also provide methods to increase blood flow to tissues, for example, to tissues in regions of low oxygen tension. Basic as well as clinical studies of nitrite and other metabolites of nitric oxide are continuing in the Center for Perinatal Biology with Arlin Blood, PhD, as the lead investigator.