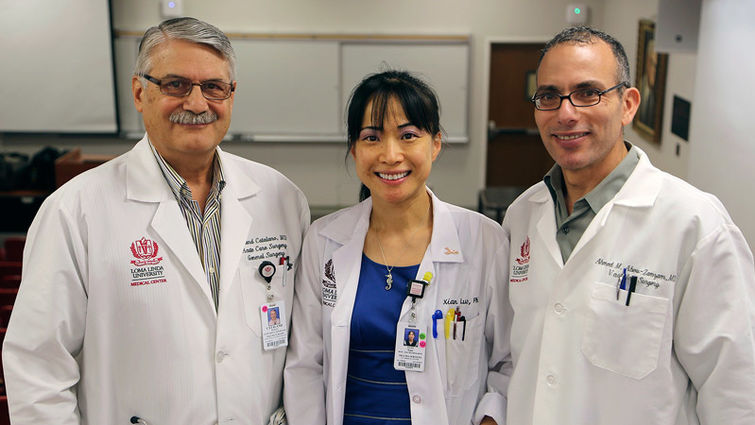 According to Xian Luo, PhD, a researcher in the trauma services department at LLUMC, the grant will fund multi-center studies target at specific knowledge gaps, including one study that will validate different therapies for vascular trauma. As the only Level 1 Trauma Center in a four-county area, Loma Linda University Medical Center (LLUMC) will participate in one of the studies.

“Dr. Richard Catalano will serve as principal investigator for the portion of the study that will be conducted at Loma Linda,” Luo says.

Ahmed Abou-Zamzam, MD, chief of vascular surgery in the department of cardiovascular and thoracic surgery at Loma Linda University School of Medicine, will serve as Catalano’s co-investigator for the study. Luo will facilitate LLUMC’s involvement in the multi-center trial. “Participating in this study will help Loma Linda contribute, on a wider scale, to the care of the trauma patient,” Abou-Zamzam observes.

In addition to LLUMC, Luo says more than 10 trauma centers are participating in the study including:

Luo notes that as the number of participating trauma centers nationwide increases, a subsequent expansion and extension of the two-year PROOVIT grant is highly likely.

Catalano concludes with an optimistic appraisal of what the grant means.

“The grant represents the first major funding for our Trauma Center research program,” he notes, “and hopefully the first of many.”