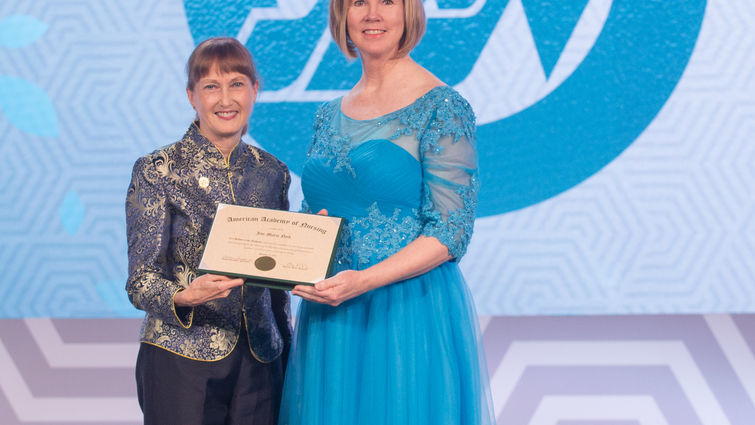 Loma Linda University School of Nursing Professor Jan Nick, PhD, RNC-OB, CNE, ANEF, was announced as one of six nurse leaders from California selected for induction as fellows by the American Academy of Nursing, a fellowship that is highly selective and considered one of the highest honors in the nursing profession.

It was the body of work spanning almost two decades of international work that supported Nick's candidacy into the academy. Nick's main activities included building capacity of nursing education internationally, participating in the committee that developed the first certification exam for nurse educators, assisting a hospital in developing a new nursing program in South America as a Fulbright Scholar and developing policy with the International Council of Nursing in Geneva, among others.

Nick has served at the School of Nursing since 1997, teaching a variety of classes such as Obstetrical and Neonatal Nursing, Research, as well as Informatics and Evidence-based Practice.

Nick’s professional career has been a journey of passion and impacting others while experiencing pure joy and self-fulfillment, she said.

In addition to the fellowship, Nick has been appointed as a member of the Informatics, Technology and Evidence-based Practice expert panel because of her expertise in Evidence-based practice, something she has been teaching to nurses around the world since 2005. The Academy’s expert panels advance different innovations in healthcare delivery to address health needs in different populations.

Early in her career, she did not consider this admission to be a possibility, but as she grew as a nurse scientist and found her niche in nursing, she began to anticipate the prospect. “I engaged in activities with professional organizations, worked globally, published, and developed standards and policy. I began to see the possibility and set this as a professional goal,” Nick said. Coming from a disadvantaged background, Nick was impressed that the award is for those for those who work hard and impact their science in tangible ways.

Additionally, the impact of this admission was felt by the Loma Linda University School of Nursing, opening a wider door for Nick’s colleagues to apply. “Some institutions had multiple nurse scientists being inducted each year,” Nick said. “The same is possible for LLU, and if achieved, would be tangible evidence of our quality, contribution, and maturity in nursing science.”

Elizabeth Bossert, PhD, RN, dean of the LLU School of Nursing, said the induction was no surprise. “I am so glad for her that her work has been recognized by this distinctive honor,” Bossert said. “Her achievement of the fellowship indicates the level of professionalism that LLU School of Nursing believes in and offers.”

With the addition of this new class, the total number of Academy fellows stands at over 2,500. Representing all 50 states, the District of Columbia, and 29 countries, the fellows are nurse leaders in education, management, practice, policy, and research. Academy fellows include hospital and government administrators, college deans, and renowned scientific researchers.