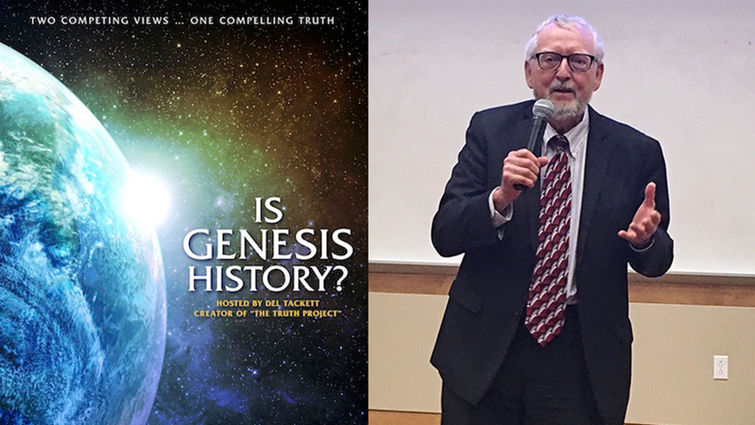 Professor Leonard Brand, PhD, spoke about the film “Is Genesis History?” during a prescreening held at Loma Linda University on Feb. 18. Brand, a creationist scientist, served as an advisor for the film, though he noted he doesn’t agree with all of it.

While on a dinosaur dig in Wyoming in June 2015, Leonard Brand, PhD, Loma Linda University professor of biology and paleontology, was approached by a stranger.

The stranger explained his mission of creating a documentary film exploring science that supports the biblical account of creation and the flood found in the book of Genesis. The filmmaker’s name was Thomas Purifoy.

The resulting film — Is Genesis History?  —  showed nationwide Feb. 23, and due to its box-office success, will replay in encore presentations across the U.S. March 2 and 7.

The topic of scientific evidence backing up the Genesis account is dear to Brand, who teaches and does research in the department of earth and biological sciences at Loma Linda University.

Brand agreed to serve as an advisor for the film, and Arthur Chadwick, PhD, a professor of biology at Southwestern Adventist University, is one of the experts interviewed in the movie. Chadwick leads the dinosaur dig where he and Brand were approached by the filmmaker.

Brand emphasized that he does not agree with everything that is said in the film, but he said it is one of the best of its type he has seen, due to its careful and thorough exploration of Earth’s origins through interviews with experts in many fields — geology, paleontology, marine biology, microbiology, astronomy, archaeology and more.

Loma Linda University showed the film in a pre-screening on campus Feb. 18, followed by a discussion and audience Q&A with Brand; Suzanne Phillips, PhD, chair of the department of earth and biological sciences; Janice De-Whyte, PhD, assistant professor at LLU School of Religion; and Ronny Nalín, PhD, a research scholar at the Geoscience Research Institute, a Seventh-day Adventist organization that examines scientific evidence concerning origins, with its main branch adjacent to the LLU campus.

“This is not a blind faith; the Bible tells us that God has not left Himself without a testimony,” Phillips said of belief in the biblical account of origins. She expressed her appreciation of the film for showing that solid data exists in support of the history recorded in Genesis.

Adding to that data is part of the purpose of the Geoscience Research Institute, as well as Professor Brand and others working with and for LLU’s department of earth and biological sciences.

The department of earth and biological sciences at Loma Linda University fills a unique role in the Seventh-day Adventist educational system. It is the only department in the system that offers a PhD in geology.

The faculty emphasize scientific rigor along with a focus on philosophy of science and the dif­fering scientific worldviews that influence how scientists interpret evidence.

“Our scholars, both faculty and students, can — and must — think about questions of origins at a deeper level than is common,” Brand said. “Other­wise we would not be able to be a positive in­fluence for a population that needs the Word of God.”

This matters even more when considering that many graduates from the department go on to teach future students.

“Part of our mission is to prepare students to thoroughly understand and even teach those philosophical areas where science and religion meet and sometimes clash,” Brand said. “There is no other place where you can get a graduate degree in geology from teachers who believe that the world bears witness to the biblical accounts of global events.”

Students, alumni and faculty also contrib­ute to the growing body of scientific evidence regarding biological and geological history through publishing research backed up by both evidence and the biblical perspective.