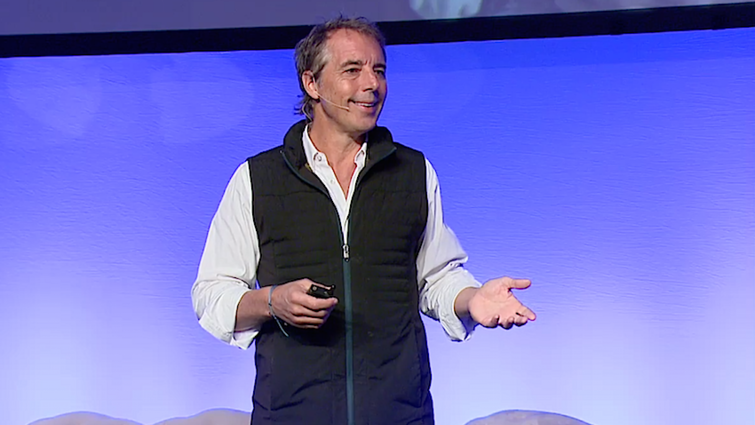 Dan Buettner shares his knowledge of the Blue Zones at the Healthy People Conference, Friday, March 3.

The City of Loma Linda is one of five Blue Zones® in the world and the only one in the United States. The others are Sardinia, Italy; Okinawa, Japan; the Nicoya Peninsula in Costa Rica; and Ikaria, Greece.

What is a Blue Zone? A geographic area in the world where residents have greater longevity as declared in Dan Buettner’s November 2005 cover story for National Geographic.

Buettner stopped by Loma Linda University Health to talk about the five Blue Zones at the Healthy People In Healthy Communities Conference, Friday, March 3, just one day after researchers from the other four areas were on campus to talk about their latest findings related to health and longevity.

According to Buettner, there are several common denominators in the lifestyles of those living in a Blue Zone. So if you want to get on the road to longevity, here are eight things you can do:

Move naturally. Lace your day with physical activity. People in Sardinia, Italy spend their day planting gardens and de-conveniencing their homes so that they have no other option but to move. While that may not be practical for us, we can opt to walk or bike instead of drive or stand instead of sitting at work all day. This will fare better than just hitting the gym for 30 minutes as the end of a sedentary day.

Take a daily “happy hour.” Stress exists no matter where we live. What makes a Blue Zones different are daily rituals that reduce stress. Give yourself some downtime with a short nap, read a book or whatever way you like to decompress.

Live with purpose. The Okinawans call it “Ikagi,” while the Nicoyans call it “plan de vida.” Essentially, know why you wake up every morning — this is worth seven extra years of life expectancy.

Eating a plant-based diet. This one doesn’t need a lot of explanation. As proven by the Adventist Health Study, eating minimal meat and lots of nuts and beans will do the trick.

Portion control. In a few simple words, “Eat breakfast like a king, lunch like a prince and dinner like a pauper;” and stop eating before you’re too full.

Loved ones first. Successful centenarians put their loved ones first. This means to keep them nearby, especially your aging parents and grandparents. Committing to a life partner and dedicating time to children will likely add up to three years of life expectancy.

Faith. Regardless of the denomination, belonging to a faith and attending services at least four times per month will add four to14 years of life expectancy.

Curate your social network. Social behaviors such as smoking, drinking, obesity, unhappiness and even loneliness are contagious, so choose your friends wisely.

While longevity is heavily dependent upon one’s genetic makeup, Buettner added, the average person can increase his or her life expectancy by 10-12 years by adapting the Blue Zone lifestyle.