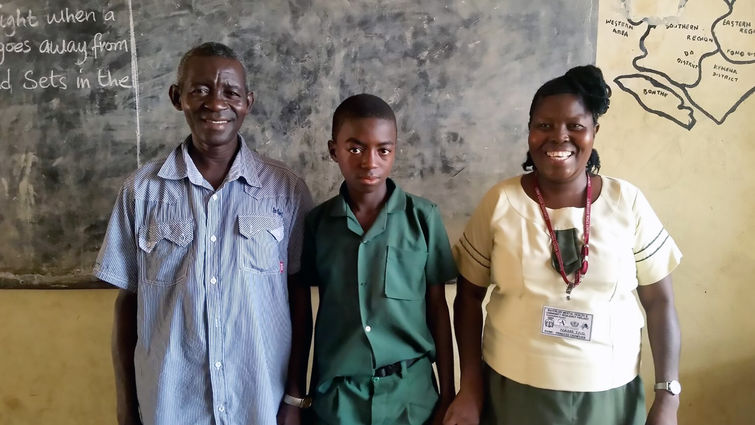 Citizens of Sierra Leone have been seriously traumatized by an 11-year civil war and the Ebola crisis. This man and boy pose with their teacher, one of 25 volunteers trained in anxiety and stress reduction by Loma Linda University researchers

A team of researchers from Loma Linda University School of Behavioral Health laid their research aside last August to deliver an intervention for the traumatized citizens of the African nation of Sierra Leone.

According to Susanne Montgomery, PhD, associate dean for research at the school, the decision to deliver the intervention came out of the recognition that the residents of Sierra Leone are a very traumatized people.

“Life has been extremely difficult for the people of Sierra Leone in recent years,” she explains. “Not long after their 11-year civil war ended, the Ebola crisis hit. It couldn’t have come at a worse time since many of the country’s health clinics were wiped out during the war. To make things worse, there is only one mental health specialist in the whole nation.”

Montgomery says that when the Ebola virus arrived in Sierra Leone, the government was so afraid of transmission that it shut down all the hospitals in the country for regular care, including Waterloo Hospital, which is operated by Adventist Health International. She adds that three Waterloo staff members contracted Ebola and two nurses died from the disease.

Although Waterloo Hospital eventually was one of the few allowed to reopen for regular care, staff members felt horrible about their inability to serve Ebola patients. “The ones who survived had horrible guilt feelings mixed with their own fear regarding Ebola,” she says. “They had to turn away gravely ill patients based on government directives because bringing them into the clinic would mean other people might get Ebola and die, too.”

When Loma Linda researchers arrived in Sierra Leone in August 2015, it quickly became apparent that if they really wanted to make an impact on the health of the small nation, they would have to address the mental health needs of the population first. Montgomery recalls the moment when Beverly Buckles, DSW, dean of the school, announced a change in plans.

“Beverly Buckles said we have an ethical obligation to treat the stress levels of these people before we begin any research study,” Montgomery recalls.

To do that, the four-person team led by Buckles worked with Waterloo Hospital staff and the Adventist Development and Relief Agency (ADRA) to recruit a group of 40 volunteers from the local community, which they organized into two groups of 20 each. Using a tool called CRM—the acronym stands for community resiliency model—they first delivered the program as an intervention to help participants deal with their own stress and anxiety before training them, at a later session in January 2016, to train other trainers in implementing the CRM intervention to reduce the after-effects of trauma in their respective communities.

“If you have a certain number of traumatic life events happen in a short period of time,” Montgomery notes, “they will highly impact your health. People who have been in situations of protracted stress can’t make good decisions because their energy is consumed with trying to survive. Given all that happened, it is actually normal to react that way. After awhile, many experience sharp increases in their levels of anxiety and depression. It’s biology, not weakness. We are built that way to help us survive.

“The CRM program," she continues, "resets the natural balance of the nervous system after it has been upset by traumatic events. We focused our efforts on teaching people the skills they need to reduce their own stresses and increase their resiliency.”

Before delivering the intervention, the team found that 38 percent of the group was suffering from post-traumatic stress disorder (PTSD) in the clinical range while clinical levels of depression and anxiety were at 46 and 29 percent respectively.

At the end of the intervention, the team re-tested all 40 members of the two groups and found that the CRM tool had produced dramatic improvements in participants' abilities to cope.

With the interventions successfully over, the Loma Linda team then trained some of the participants to train others. Buckles, Montgomery and the other members of the team returned to Sierra Leone in February to train 25 of the original 40 graduates to become trainers themselves.

“It took four-and-a-half days of working inside a small building with a slab floor and plastic walls,” she recalls. “It was very hot and humid in there—95 degrees Fahrenheit with between 90 and 100 percent humidity—but each one of those 25 people completed the training and agreed to deliver the CRM skills to 30 more people to help them reduce their stresses. Indeed, just two short months after this, the training participants had already shared the skills they learned with more than 300 of their friends, family members, and neighbors.”

As for the research study—“the Sierra Leon capacity building study”—Montgomery says it is one of several research projects designed to assess the effectiveness of the CRM approach. “Besides delivering and studying the CRM intervention across different cultures and traumas, our CRM research program includes a biomarker study to validate self-reported stress reductions with objective biological measures,” she reports.

“The Sierra Leone study will be completed in July when we assess how the trained participants fared in delivering the program themselves,” Montgomery informs. “So far, however, we already have exciting results suggesting that our trainers are doing an awesome job of sharing their skills with the local population."

When the results are tabulated, Buckles, Montgomery, and their colleagues will start thinking of ways to integrate the CRM stress reduction program into the health care delivery system.

“The assumption,” she continues, “is that being able to identify patients at risk for high stress and low resiliency and then offering them a tested and proven method for reducing those negative indicators is likely to have desirable outcomes such as improved recovery times and reduced recidivism following hospitalization or illness diagnoses. We’re excited about this!”

Montgomery concludes on a very upbeat note. “CRM was awesome and Sierra Leone was awesome. We felt we needed to do something for our brothers and sisters in Christ who have been through so much. We are very happy with the way it turned out.”