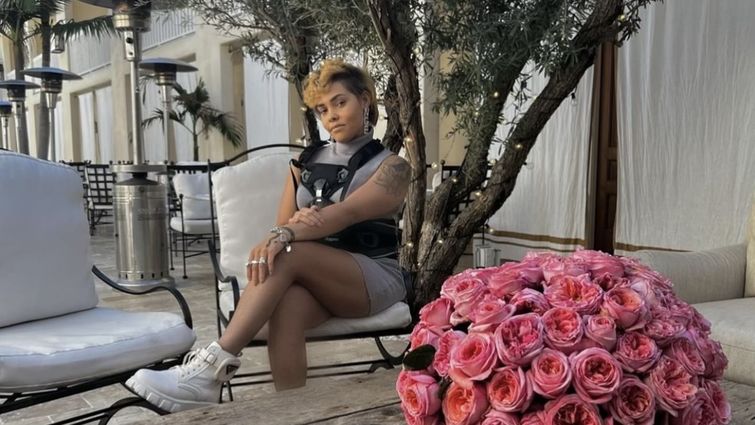 Within three months of starting her treatment for Hodgkin Lymphoma at Loma Linda University Cancer Center, Amber Hurd says her symptoms dissipated, and she gradually regained her ability to walk.

Amber Hurd attended her first appointment with her oncologist at Loma Linda University Cancer Center in a wheelchair since she had lost her ability to walk. The 28-year-old said that within weeks of obtaining a proper diagnosis and treatment for Hodgkin Lymphoma, her symptoms dissipated; she now drives and walks to her appointments, taking pride in restoring independence and mobility.

“When Amber told me she drove herself to the Cancer Center for the first time since her diagnosis, my heart filled with joy. I was grateful to share that moment with her during this extremely difficult journey,” said Mojtaba Akhtari, MD, Hurd’s hematologist-oncologist at LLU Cancer Center.

Reflecting on her journey with Hodgkin Lymphoma, Hurd said the first-hand experience of battling an aggressive disease has equipped her with a deeper understanding of patient-hood. As an aspiring nurse, Hurd said her newfound ability to place herself in patients’ shoes will allow her to improve as a care provider.

Dr. Akhtari and all the nurses at the Loma Linda University Medical Center and Cancer Center were so supportive and encouraging. They helped me keep faith the whole time that everything would be okay.Amber Hurd

Upon referral to Loma Linda University Health, Hurd worked with neurosurgery care teams to determine the root cause of the ailments that had put her life on hold half a year earlier. In January, Hurd underwent surgery on her spinal cord, during neurosurgeons removed a lesion compressing her spinal cord. Later testing revealed the lesion was part of the Hodgkin Lymphoma growing in Hurd’s spine and brain — and it was at stage IV. The diagnosis initially shocked Hurd and her family, but Akhtari provided reassurance and support every step of the way. 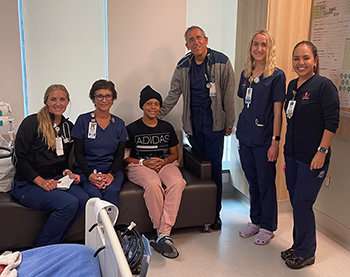 “It was a big surprise because I’ve always been pretty healthy, so the reality was difficult to deal with and weighed on my mental health,” she said. “Dr. Akhtari and all the nurses at the Loma Linda University Medical Center and Cancer Center were so supportive and encouraging. They helped me keep faith the whole time that everything would be okay.”

Hodgkin Lymphoma is a cancer that starts in white blood cells, called lymphocytes, that protect the body against various infections, Akhtari says. Hurd’s case of the Hodgkin Lymphoma growing in the brain and involving the central nervous system is quite uncommon, Akhtari says, but it aligns with the symptoms she experienced: the cancer compressing her spinal cord caused her back pain and inability to walk, while the same cancer in her brain caused problems with eyesight and memory. “That’s probably why it took so long to make the diagnosis,” Akhtari said.

When treating Hodgkin Lymphoma, an aggressive form of lymphoma, Akhtari said, "the first shot is your best shot" to avoid relapse and future complications. So he worked with pharmacists to review case studies and the latest literature about Hodgkin Lymphoma and central nervous system involvement. Then, the team developed a personalized treatment regimen for Hurd.

Caring for patients with cancer takes the dedication of a village of experts, from oncologists, pathologists, and pharmacists to oncology nurses, dieticians, and rehabilitation experts.Dr. Mojtaba Akhtari

Within three months of starting her regimen in February, Hurd said her symptoms have dissipated, and she has gradually regained her ability to walk. Now, Hurd is looking forward to her exercise routine of high intensity interval training (HIIT) workouts and weight lifting once again. "I am an independent person, and I was excited to do everything myself again as soon as I could." 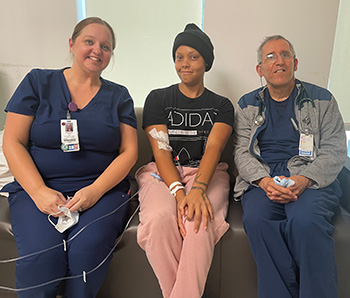 Scans earlier this month revealed that Hurd has no more evidence of the disease in her body. Akhtari said he is thrilled to see Hurd's "excellent response" to her personalized infusion therapy regimen, which includes a combination of targeted immunotherapy and chemotherapy, to see her achieve remission only halfway into the treatment plan. The skill and diligence required for a successful, whole-person treatment plan would not have been possible without Hurd’s determination and compassionate, multi-disciplinary care teams at LLU Cancer Center, Akhtari says.

“Caring for patients with cancer takes the dedication of a village of experts, from oncologists, pathologists, and pharmacists to oncology nurses, dieticians,  and rehabilitation experts,” he said.

Once Hurd completes and recovers from her treatment, she hopes to travel again; future destinations include Egypt, Japan, and Australia. She also said she hopes to return to school to complete her degree in nursing.

“I’ve always been inspired to see people overcoming things and being able to be there for them,” she said. “This experience has given me a deeper understanding and perspective that will definitely help me to be a better nurse.”

At Loma Linda University Cancer Center, physicians are committed to providing patients with compassionate, comprehensive care that gives them the best opportunity to face and overcome cancer. To learn more about all of the resources offered to cancer patients at the center, visit https://lluh.org/cancer-center. 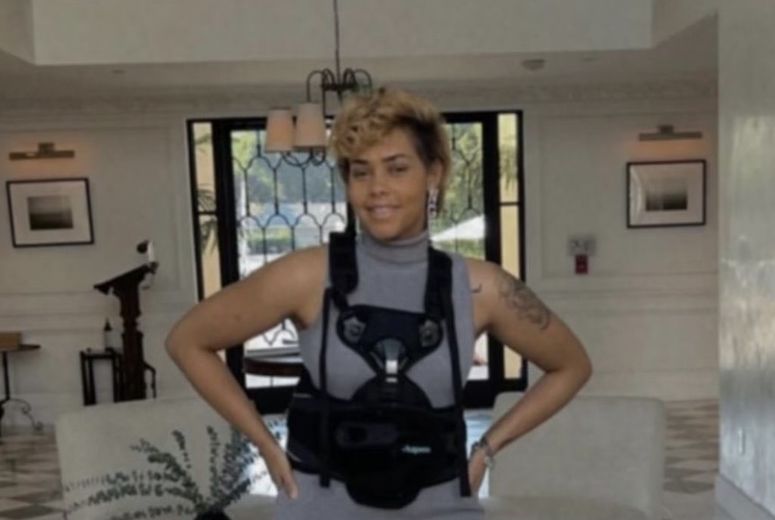 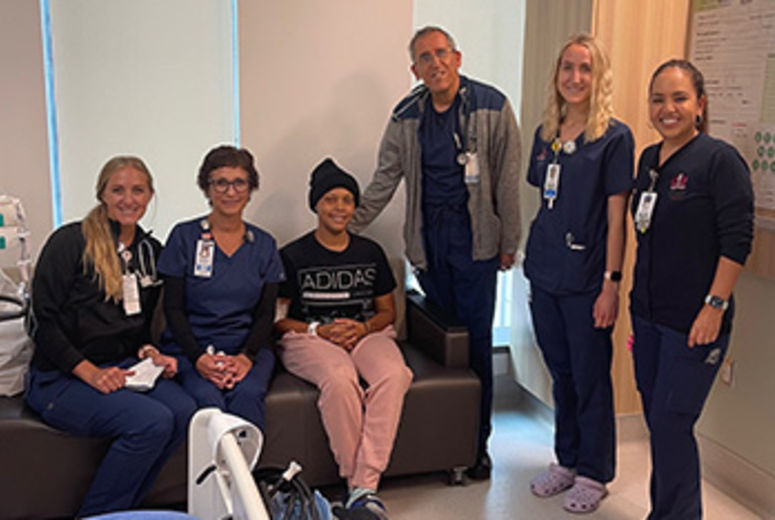 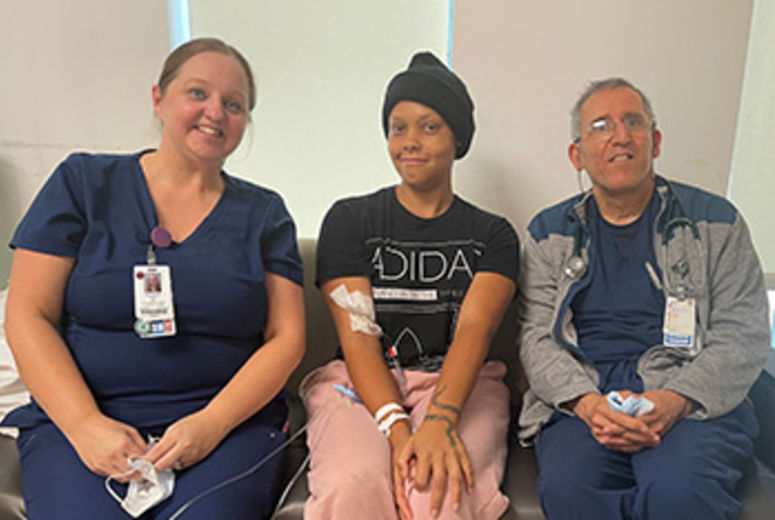