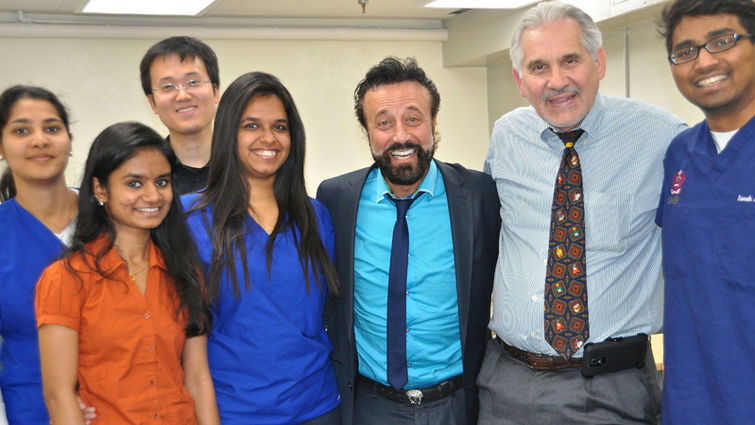 In his quest to understand the science of happiness, humor and laughter, Yakov Smirnoff, a world famous comedian, entertainer, and best-selling author decided he would find out what wisdom the internet had to offer.

Once Smirnoff had read several of the articles and findings of Berk’s research on the brain health, stress hormone reduction and immune system benefits of laughter, he found them compelling and called Berk to ask if he could come to Loma Linda to visit with him.

On Monday, February 29, Loma Linda University Health played host to Smirnoff. After a golf cart tour and brief history of the campus, Smirnoff met with Berk and his research team made up of graduate students to talk about the ongoing research. A lengthy discussion ensued, and Berk showed Smirnoff the astounding results of his research studies on laughter, and how laughter significantly impacts brain health, showing Smirnoff chart after chart of electroencephalogram (EEG) findings.

An electroencephalogram is a test used to detect electrical activity of the brain. This procedure tracks and records brain wave patterns or specific frequencies. Small metal discs with thin wires (electrodes) are placed on the scalp, and then send signals to a computer to record the results. Normal electrical activity in the brain makes a recognizable pattern. Berk used this aspect of neuroscience to gauge the effect that laughter and other behaviors have on brain activity (i.e. increases in gamma frequency)

Described as equal parts stand-up, one-man show, motivational speech and TED talk, “Happily Ever Laughter – the neuroscience of romantic relationships” is something Smirnoff has been working on for the last 20 years at his theater in Branson, Missouri. It is there that he created a laboratory for studying happiness, humor and laughter where he tested his theory on how laughter is the gauge of happiness in relationships.

Today, in addition to being a comedian, author and accomplished artist, Smirnoff is also an adjunct Professor at Missouri State University after having received his master’s degree in psychology at the University of Pennsylvania. He tours the world enlightening and speaking to audiences with his concept of, “Happily Ever Laughter,” and has a special airing on SoCal PBS, where he cites Loma Linda University’s Berk and his research.