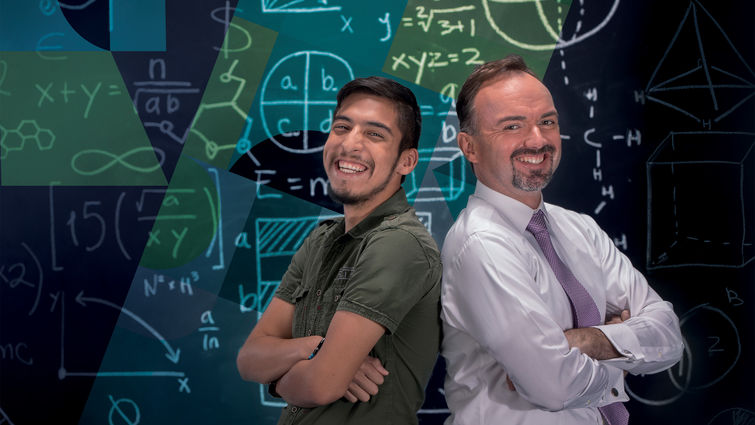 Although March is Multiple Sclerosis Awareness Month, many people don’t realize that the disease attacks children and teens as well as adults.

Juan Garcia was one of those people. When he was 12, Garcia began experiencing unusual symptoms. At first, it was just blurry vision and eye pain. Then he started feeling exhausted much of the time. One day, he woke up completely numb on one side of his body. Later that day, he tripped and fell twice while running in PE class.

With youthful optimism, Garcia convinced himself it was only a passing phase. “I’m going to get better,” he thought.

Five years and countless doctor visits later, he finally learned the cause of his strange symptoms: multiple sclerosis.

Unbeknown to Garcia, the chronic inflammatory and degenerative disease had been attacking his central nervous system for years, disrupting communication between his brain and body.

Garcia had thought MS was an adults-only disease, but he soon learned that between 8,000 and 10,000 children and teens in the United States have the disorder.

Fortunately, the Pediatric Multiple Sclerosis Center at Loma Linda University Children’s Hospital — one of only 12 sites in the nation listed with the Network of Pediatric MS Centers and funded by the National Multiple Sclerosis Society — is located just 35 miles from Garcia’s home in Oak Hills, California.

Gregory Aaen, MD, director of the Center, told Garcia the disease usually strikes after puberty. He said symptoms can include weakness and fatigue, blurry vision and pain in one eye, numbness and tingling, poor concentration and memory, difficulty in walking, maintaining balance and controlling bodily functions, and seizures. Aaen informed Garcia that treatment consists of injectable drugs, pills and intravenous infusions.

“Most of the time, we use injections because they have been out for approximately 25 years, and published case studies show they are just as efficient in children as adults,” Aaen says.

Garcia enrolled as a participant in a clinical trial Aaen is conducting to find out if a new oral medication for adults works for teens as well. Although Aaen cautions that anecdotal testimony is insufficient to establish the effectiveness of a treatment by itself, Garcia says the drug is helping him a lot.

He cites two family trips to Mexico as an example. After the first, he felt listless and exhausted for several weeks. But after the second — which occurred during the time he was on the medication from the clinical trial — Garcia felt just fine. “I stayed out late every night, hanging out with my friends,” he says. “I still feel good!”

With the support of his family and Aaen’s expert care, Garcia looks forward to the future. He recently entered a program to become a freight broker, a skill he will use in his family’s trucking business, and wants to study photography.

He offers advice for young people with MS. “Don’t lose hope. Don’t let the sickness take over your life. Never lose sight of what you want to do.”

Individuals interested in learning more about pediatric MS are invited to contact Dr. Aaen directly by email at GAaen@llu.edu.