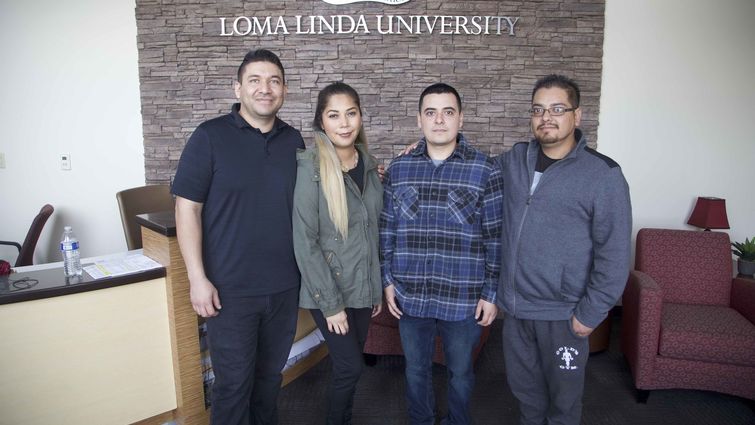 Excitement and surprise filled the room as four strangers and Loma Linda University Transplant Institute patients met for the first time Jan. 20, weeks after an unexpected kidney exchange. The two recipients, who just months prior were battling for their lives, smiled from ear to ear as they shared how lively they are now post-transplant.

The reunion brought together a husband and wife and two brothers. Both pairs agreed to give their kidneys to strangers to save their loved one’s life. Ana Morin and Jesus Verduzco were the recipients of a kidney exchange, a moment they both have waited on for several years.

Ana Morin’s journey started more than half a decade ago. She found out her kidneys were failing in 2012, less than a year into her marriage with Danny. One day Ana and her co-workers were checking their blood pressure and saw her numbers were dangerously high. The next day she saw a doctor and learned the unforgettable, life-altering news: her kidneys were functioning at 16 percent. She was shocked because her only symptom was fatigue, and she never would have linked it to kidney failure.

Doctors monitored her for two years until her kidney function declined to nine percent. It was then time for her to start dialysis and get on the kidney transplant donor list. It was a battle Morin said was discouraging at time, but one she was up for thanks to God, her husband and her odds.

“I heard some people do not even live to get to dialysis,” Morin said at the reunion last week. “To have the opportunity to do dialysis and have a chance for a donor made me grateful.”

Her husband, Danny, recalled that although they were hopeful, he knew they needed help. They started an Instagram account called “2kidneys1love,” and more than 20 people offered their kidney. Little did they know that Danny would be the match she needed.

But there was one twist— he wouldn’t be giving his kidney to her. Someone else would: Jesus Verduzco’s brother. A few weeks after being scheduled to give his wife one of his kidneys, Loma Linda University living kidney donor program called Danny and asked if he would be willing to take a step further — donate to another patient in the Inland Empire in need.

That family was the Verduzco family from Colton. In 2016, Jesus Verduzco went in for a routine eye appointment. The technician noticed that the blood vessels in his eyes reflected a dangerously high blood pressure. A level so high she wanted to send him to the emergency room. Instead, Jesus scheduled a visit with his doctor the following day. The news there left him floored — his kidneys were only working at 15 percent capacity

“In the beginning I was just living a normal life,” Verduzco said. “When the doctor told me I was a walking miracle because my blood pressure could have killed me, I was amazed I was alive.”

Immediately his wife offered herself up as a donor, then other members of his family did the same, though none of them matched. In Japan, Billy Verduzco was the last family member to learn of Jesus’s need. Billy was also engaged with a baby on the way, making Jesus hesitant to accept a kidney from his little brother.

But Billy Verduzco made the sacrifice of leaving the Marines and returning to the U.S. Billy agreed to the kidney swap but soon found out he was not a match for his brother. That’s when Loma Linda University Health offered another option — a kidney exchange.

Both brothers agreed, but for Danny Morin, he knew he had to pray. He was all set to donate to his wife and the news was a curveball. After a few days of prayer and reflection his answer was simple.

“This is what God wanted me to do, so I’ll do it,” Danny said. “The opportunity to save another life is a bonus.”

“Bottom line, Danny did not have to do this,” De Vera said. “The fact that he agreed to the transplant has inspired all of us here and shows that kindness abounds.”

In addition, De Vera says this is why the living kidney donor program is vital. California has the longest kidney donor wait time than any other state in the county. It can take up to 10 years versus two to three in other states, De Vera said.

“These unique and special circumstances really highlight the mission of Loma Linda University Health,” De Vera said. “This is an example of going above and beyond to save more lives and make men whole.”

“The living kidney donor program gave me life,” Jesus said. “A second chance at life. I have no words because it is everything to me.”

For Danny, being able to meet Jesus and know that he helped save a father, a husband and a family was worth it all. It is a decision that he says now joins them for life.

To see the video of the families seeing each other for the first time, watch the video below.

Although many kidney transplants come from people who have passed away, patients in need can receive a kidney from a loved one or altruistic stranger through the living donor program. A series of tests are conducted to make sure the donor and recipient are a match. While kidneys are the most common organs donated by living donors, living individuals can also donate portions of a lung, pancreas, liver or intestines. If you or someone you know wants to learn more about the program, the Loma Linda University Transplant Institute’s website has more information about the process of being a living kidney donor.