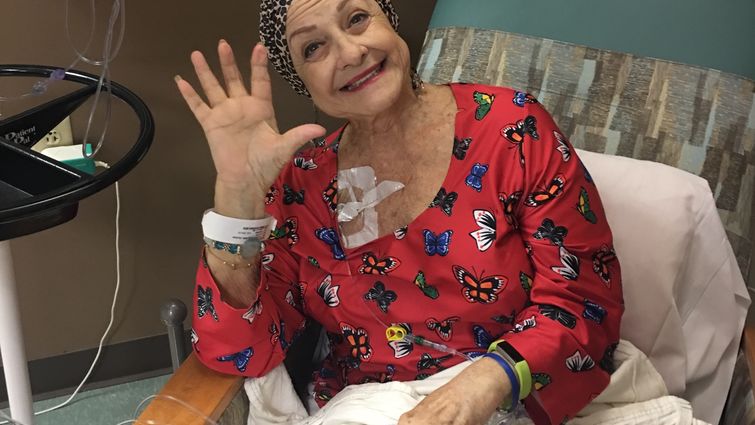 Around this time last year, Michelle Arrigo was completing her final rounds of chemotherapy at Loma Linda University Health – Beaumont – Banning. The year prior, she was suspecting pancreatic cancer before even receiving the diagnosis. Now without signs of cancer, Arrigo says she’s found a new calling — reaching out to patients battling cancer and offering emotional and mental support.

“I really believe that my goal now in life is to reach out to people who have cancer, whether pancreatic or not, to help them through this journey,” Arrigo says. During her treatment, she would often observe patients going into the clinic alone, many of them appearing sad and scared. “I just want to ease the way and be someone they can talk to when they get scared, or even when they’re not scared.”

Having overcome cancer twice in her life — first breast and then pancreatic cancer — and undergone ample hours of procedures and treatments, the 75-year-old knows what it’s like to battle the life-threatening disease.

Arrigo started experiencing intense abdominal pain in January 2019. For six months she was unable to eat without significant stomach problems and had lost 50 pounds. Doctors detected a tumor on her pancreas in May, after which she was promptly referred to Loma Linda University Cancer Center.

“By the time I got to my car after leaving my doctor’s office, I had a phone call from Loma Linda to schedule a biopsy that week,” Arrigo recounts. “It was just unbelievable.” 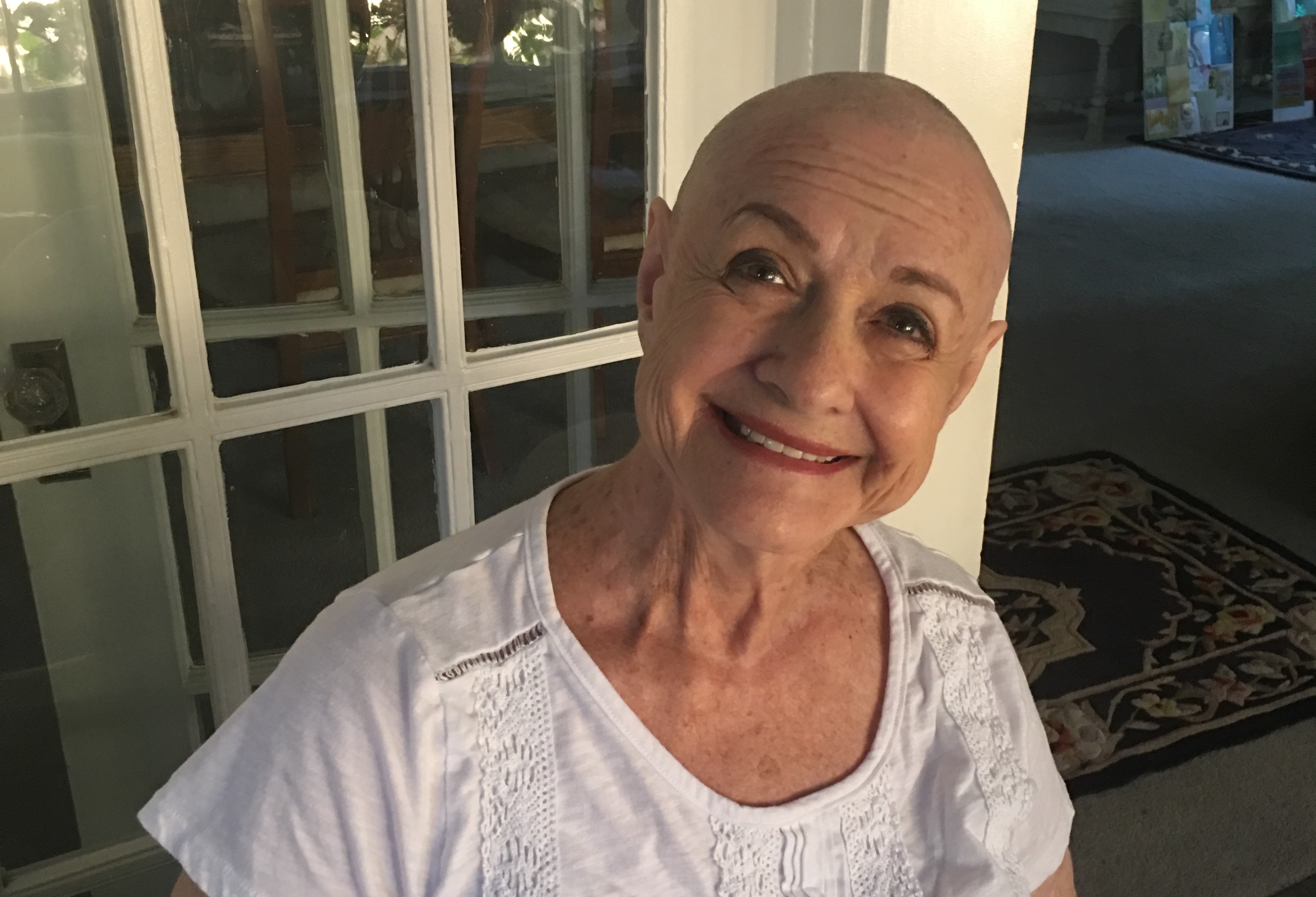 A week later, on May 31, Arrigo was diagnosed with Stage III pancreatic cancer, the fourth leading cause of cancer-related deaths in the United States. Bruce Hayton, MD, Arrigo’s oncologist at the Beaumont clinic, says Arrigo’s cancer was located in the center part of her pancreas and was “locally unresectable” because it affected major blood vessels, including the portal vein and the superior mesenteric artery.

Upon first evaluation, surgical oncologist Naveenraj Solomon, MD, deemed he could not safely remove Arrigo’s tumor by surgery, that is, unless her tumor shrunk enough.

“Being who she is, a very strong person, she said, ‘Let’s do what needs to be done’ and started treatment,” Solomon recalls.

Every two weeks, Arrigo and her husband, Tony, drove 25 miles to the Beaumont clinic for her infusion treatment and returned home with an additional fusion therapy kit for further treatment. The gear was to remain connected to Arrigo for two days before a nurse visited her to disconnect it.

“It was not easy treatment,” Hayton says. “One of the side effects is it can suppress the blood marrow where all blood cells are made, in particular white blood cells, which are part of your immune system and make you susceptible to severe infections.”

Halfway through her treatment, Arrigo one day experienced a complete system breakdown — her white blood cell count plummeted and she developed an infection and pneumonia. She spent 12 days in the hospital where she received antibiotics and treatment to stimulate her bone marrow and white blood cell production.

For Michelle, despite the delay due to COVID-19, her outcomes worked out well because of her mental strength.Dr. Naveenraj Solomon

Recovering from the incident, Arrigo recalls that her determination to follow through with infusion therapy was as strong as ever. She completed the therapy in January of this year.

Solomon said he was pleasantly surprised to see Arrigo’s tumor shrink so drastically — CT scans revealed how the blood vessels initially being compressed by the tumor began pumping back up to normal size as the tumor shrunk away from the vessels.

To further reduce the tumor’s size , Arrigo went on to complete five sessions of proton beam radiation therapy. By the time she had completed infusion therapy and radiation, her cancer was Stage 1A and manifested as specks of tumor in an area no larger than a penny’s diameter.

Arrigo was finally ready for a surgical procedure when COVID-19 spread worldwide. She worked with Solomon to settle on a date for surgery, considering risks and factors of delaying surgery versus risking potential exposure to the virus.

Arrigo checked into the Medical Center early one morning in May, and Solomon and his team went to work. They performed a distal pancreatectomy and a splenectomy, which involved removing two-thirds of Arrigo’s pancreas and her spleen. They worked meticulously to dissect potentially cancerous scar tissue from the blood vessels and then reconstructed them. The surgeons put down their tools after nearly 15 hours, having completely removed the cancer from Arrigo’s body.

“For Michelle, despite the delay due to COVID-19, her outcomes worked out well because of her mental strength,” Solomon said. “Keeping positive and strong got her through a lot of her treatment too.” 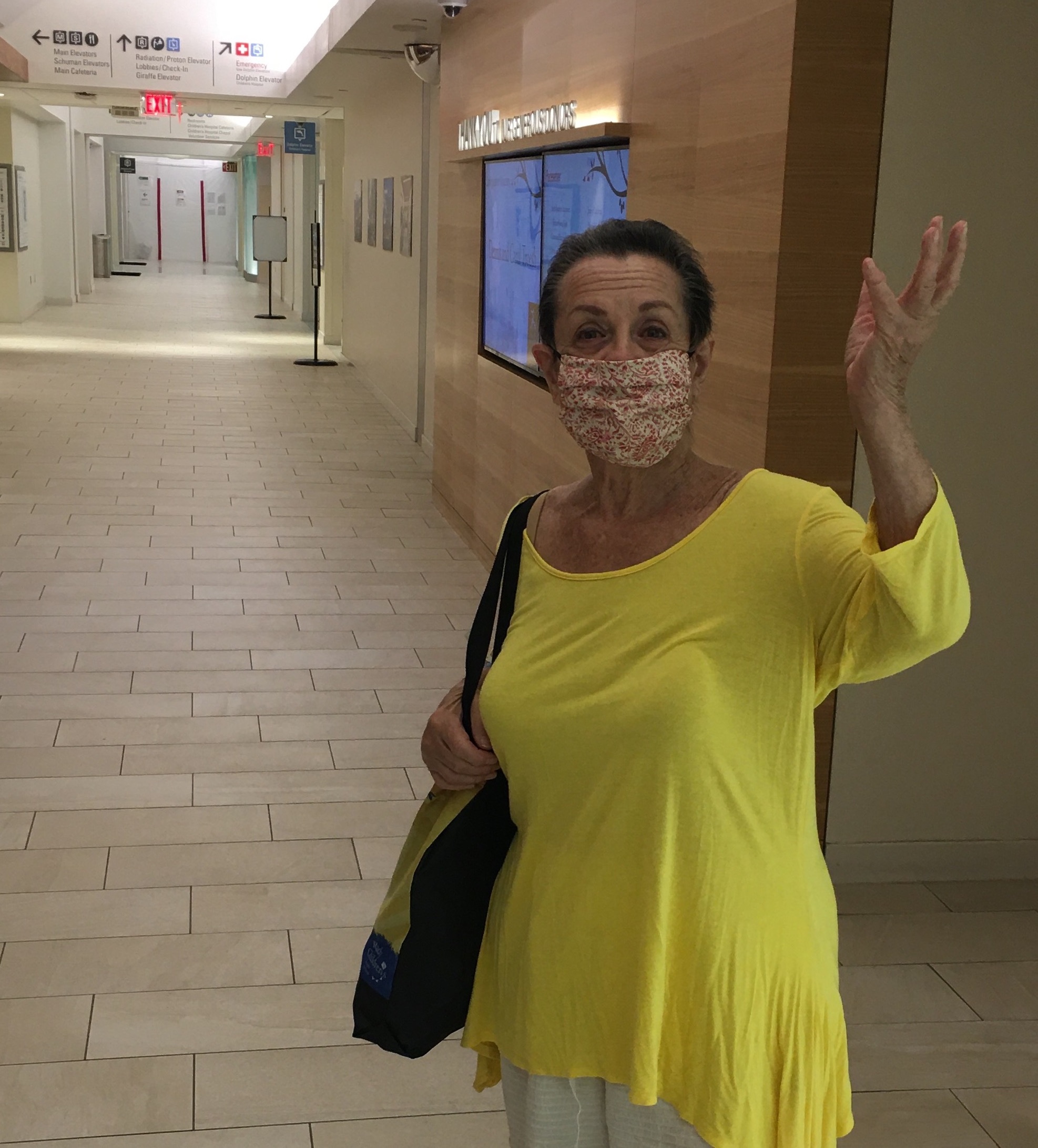 After seven days, Arrigo returned home to her husband, where she was greeted with cards, flowers, and food from the supportive friends and even strangers she calls her “angel squadron.”

Arrigo has had No Evidence of Disease (NED) now for seven months, and she continues to have blood work and her tumor marker checked every three months.

“We are so blessed we just can’t stand it,” she says. “I have had such wonderful care from the very first of every minute of this, and to say I am eternally grateful to Dr. Solomon and Dr. Hayton and their team is a complete understatement.”

Since recovery, the couple has prayed together every night, taking turns and holding hands throughout. Arrigo says she feels it is unlikely she would have attained this life extension had she not followed her doctors’ guidance at Loma Linda University Health.

Once COVID-19 clears, Arrigo says she hopes to resume her volunteer work in Riverside and to also take on a new role: being an assuring presence in the lives of people with cancer. She says one of her recent Facebook posts reads, “I have broad shoulders, a good ear, and a closed mouth. If you or anyone you know has cancer and wants to talk about it, I am here for you.” Arrigo has had several people reach out to her since.

“Now I can reach across the table and hold their hand and say, ‘I understand’” she says. 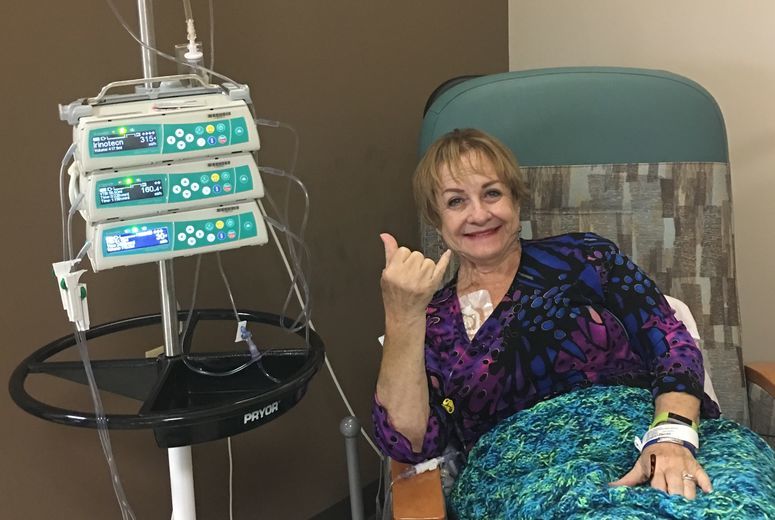 Michelle Arrigo receives her first round of infusion therapy. 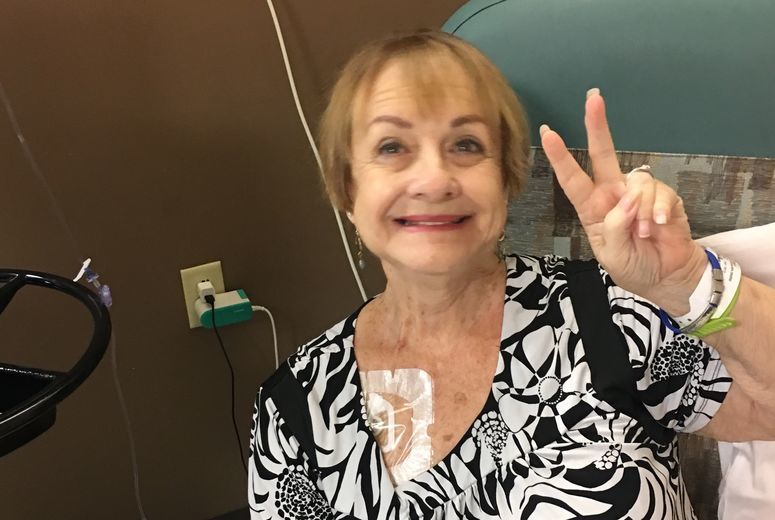 Michelle Arrigo receives her second round of infusion therapy. 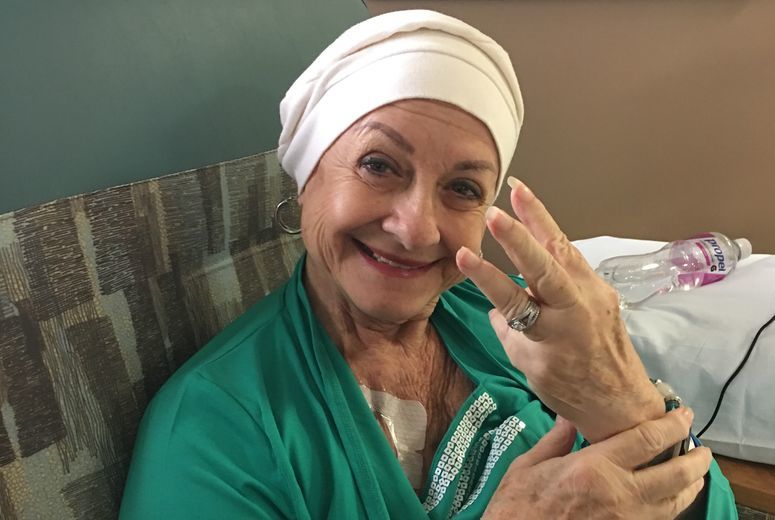 Michelle Arrigo receives her third round of infusion therapy. 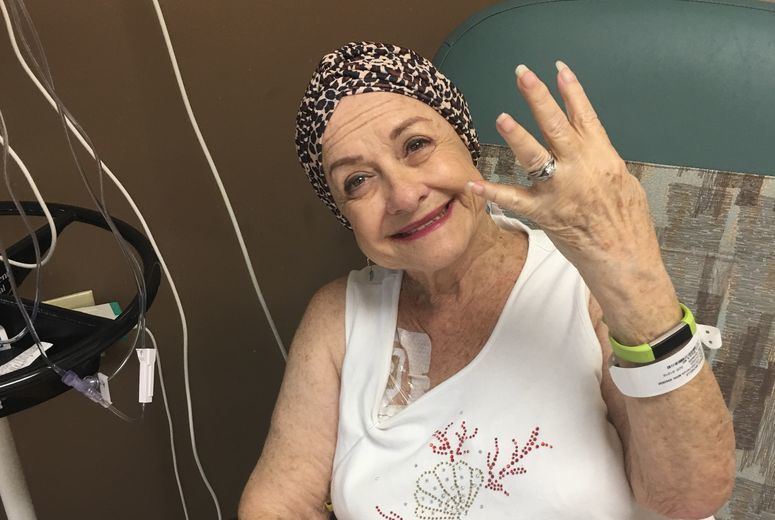 Michelle Arrigo receives her fourth round of infusion therapy. 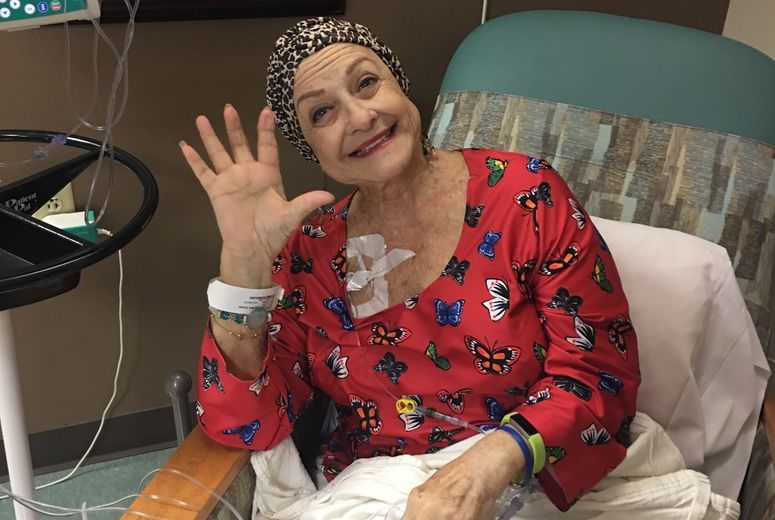 Michelle Arrigo receives her fifth round of infusion therapy. 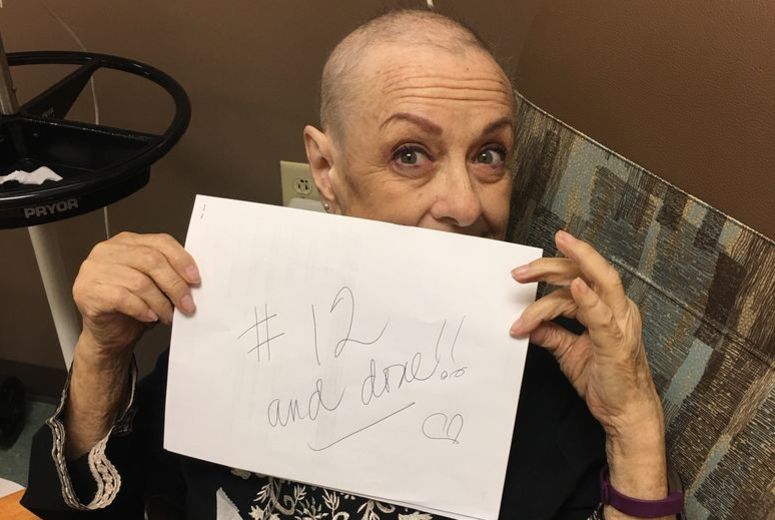 Michelle Arrigo receives her twelfth and final round of infusion therapy. 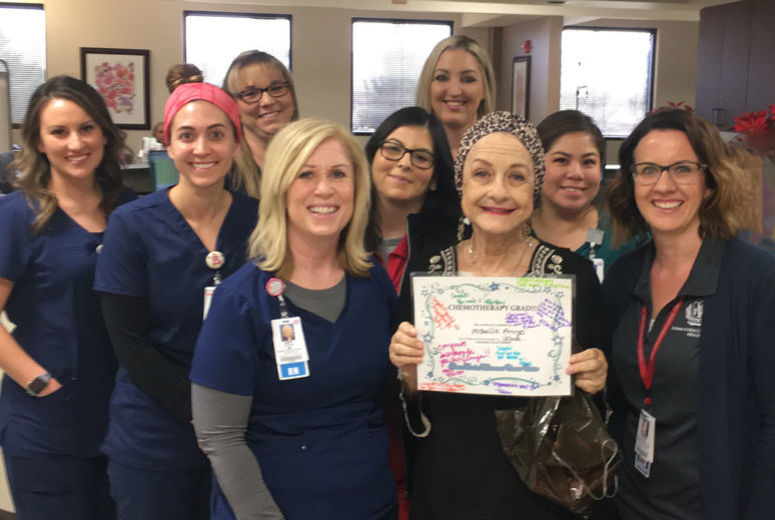 Michelle Arrigo at her final round of infusion therapy.