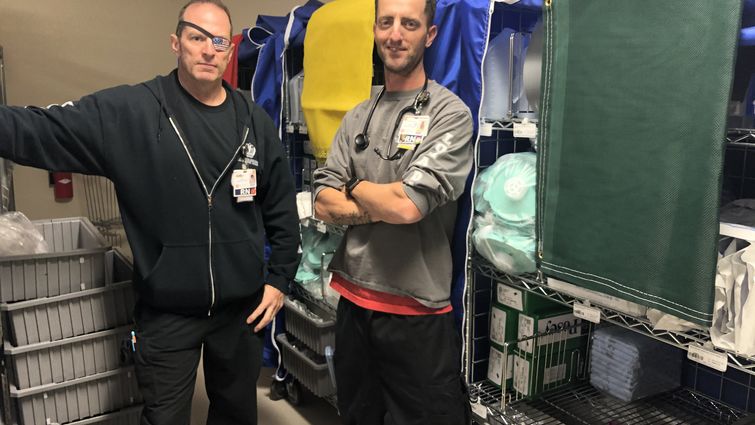 It was by chance working at the emergency room of Loma Linda University Medical Center – Murrieta that two Army Nurse Corps Nurses would meet and have a conversation about mass casualty incidents. This conversation would inspire Joey Meyer and John Copeland on a year-and-a-half journey to ensuring the hospital was more prepared for a mass casualty incident. Together they have created new disaster carts, classes and protocols for a possible incident.

The Federal Emergency Management Agency (FEMA) defines a mass casualty incident (MCI) as an incident that generates more patients at one time than locally available resources can manage using routine procedures. It requires exceptional emergency arrangements and additional or extraordinary assistance. This can be the result of a violent act or traumatic accident.

While Murrieta is prepared in the event of a natural disaster, the hospital is not officially designated as a trauma center by the state of California. Meyer says people don’t often know hospital designation — they just know that’s where they can get help.

It was this reasoning, their shared experience in military nursing and their love for the community that inspired the pair to enhance the department’s capabilities for treating victims of a mass casualty event.

“In the military, you learn from the past and you put into action preparations for the future,” Meyer says.

The pair started by researching previous mass casualty events such as the shootings in Las Vegas and Florida and made calls to the local hospitals that cared for the victims to research what worked and didn’t work in saving lives.

With years of military training for mass casualty incidents and oversea tours, the pair took their skills and the research they had conducted to develop a plan. This plan involved creating specially equipped disaster carts that were readily accessible and mobile in the event of an incident.

In collaboration with the manager for Supply Chain Management, Meyer and Copeland created carts with supplies that correspond with the level of sustained trauma based on NATO’s color-coded system. Green carts provide care for the least severely injured, yellow carts provide equipment for patients who are injured and are unable to move, and red carts contain supplies for the critically injured where life-saving treatments are needed.

Meyer says the carts were developed primarily to respond to an active shooting scenario. “We hope we never have to use these, but we have to be prepared for them,” he says.

For Meyer and Copeland, being prepared isn’t just an option but a lifestyle that they learned from their time in the Army. For this reason, they didn’t stop at creating the disaster carts. Both continued to search for additional ways they could enhance the hospital’s preparedness for a mass casualty situation. Together they utilized their military leadership experiences to create a class that would train their colleagues on how to use the carts and what to do in a mass casualty incident.

Meyer says there is still work to be done. “This has been a real process,” Meyer says. “With every step, there was something else we learned — something else more we could do to improve. We’re passionate about making sure we are prepared.”

The pair is currently working with the manager of Emergency Operations to create new protocols that will ensure each individual in the hospital knows their role and steps to take in the event a mass casualty incident were to occur in the Murrieta community.

“It’s terrible that we are having to train and be prepared for these kinds of tragedies,” Meyer says. “At the very least, I want the community to know that Murrieta is prepared. We won’t let the community down.”

To learn more information about the emergency services offered at LLUMC — Murrieta, please visit the website or call 951-290-4000. If you have an acute life-threatening emergency, call 911.