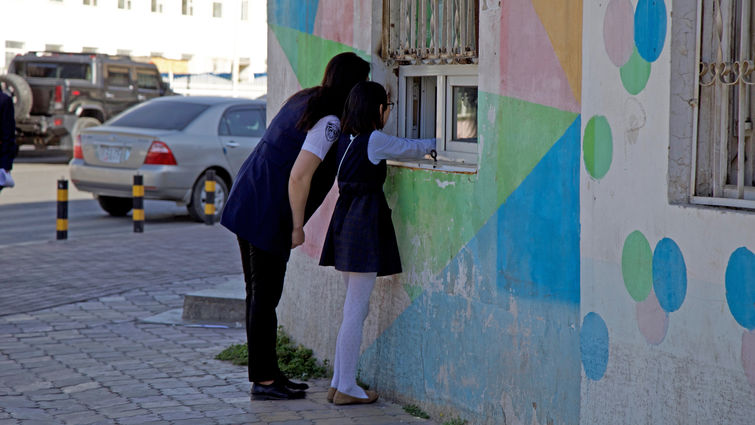 In Mongolia, the Loma Linda Univeristy School of Public Health finds cigarettes are being sold to children. Photo by James Ponder.

Researchers from the School of Public Health say Mongolian children are targeted for illegal sales of cigarettes near their schools, cementing the foundation for policymakers to implement enhanced regulations for tobacco control in their communities.​

In 2017, the National Institutes of Health (NIH) awarded a $1.4 million grant to a team of researchers from the Loma Linda University School of Public Health to study tobacco control in Asia — specifically in Mongolia, Laos and Cambodia — and to create a database that shows where smokers are buying cigarettes. ​

The grant’s principal investigator is Pramil Singh, DrPH, director of the Center for Health Research at the Loma Linda University School of Public Health. He says tobacco companies have been able to attract buyers in Southeast Asian countries by selling low-cost cigarettes.​

“Tobacco companies are losing ground in the west but are gaining ground in the east in Asia by selling them at really low rates,” Singh says. “When we started our research, they were being sold for 20 cents a pack in Cambodia.”​

In a study titled “Spatial and economic proximity of cigarette sales to school children in Mongolia,” researchers found that although the price of a pack of cigarettes has risen to the equivalent of US$1.80, students who couldn't afford packs at that price were still more likely to be cigarette users even if they couldn't afford them. The study said that students who were given less than US$2 a week of pocket money were two times more likely to be current cigarette users. Additionally, of those who smoke, 37.5 percent smoked single cigarettes. When vendors were found near children’s schools, that number increased to 47.5 percent.​

For their NIH grant, Singh andhis colleagues are developing mobile applications for surveys in Asia. Street researchers will ask smokers for permission to photograph the tax stamps on their cigarette packets and geo-code the location of where the cigarettes are purchased. They are also recording information about cigarettes that were sold without tax stamps, indicating they were purchased illegally.​

The directory will help Singh and his team provide information to the Mongolian government about patterns of tobacco sales and use. Mongolia, Laos and Cambodia all ratified the World Health Organization’s 2005 Framework Convention on Tobacco Control Treaty. In signing the treaty, the three countries agreed to tax cigarettes so heavily as to put them beyond the reach of teenagers and average consumers. They also agreed to ban cigarette advertising on billboards and television as well as cigarette advertisements aimed at women and children. However, even with this treaty in place, Singh and his colleagues conclude that cigarettes still find their way into the hands of young children.​

Singh and his team presented these results to the 17th World Conference on Tobacco and Health in Capetown, South Africa, in March of 2018.

Singh says this NIH-funded research is part of the team’s larger catalog of work they are hoping to do in Eastern countries. In November of 2019, 17 Mongolian hospitals will open their doors to hundreds of local adults who will take part in the tobacco cessation program thanks to research by the School of Public Health. The program, funded by the Pfizer Foundation, will use a new medication called cytisine on 350 patients, while a control group of 350 will go through usual cessation care. The program is free for the patients and uses a medication that only costs US$20 compared to other pricier cessation drugs that can run up to US$500.​

“No one in the developing world has $500 to spend on treatment,” Singh says. “This creates the most cost-effective smoking cessation treatment on the market for the under-developed world.”​

In 2002, the School of Public Health Global Tobacco Prevention and Control programreceived a $1 million grant to start tobacco control efforts in Southeast Asia. As of 2018, grants from the NIH, Pfizer and other organizations help fund their work in Cambodia, Laos and Mongolia. Their ultimate aim is to reduce tobacco dependence to zero. In Mongolia, they are testing cytisine, a plant-based smoking cessation treatment, costing US$20 for the entire course of medication. Using geographic information system software, researchers identify locations where tobacco vendors and companies violate World Health Organization (WHO) regulations on package and price of cigarettes. In Cambodia, researchers were able to increase the price of cigarettes from 20 cents to 45 cents per pack. The School of Public Health discovered that high rates of infant mortality pregnant occurred among pregnant women who chewed tobacco during morning sickness.