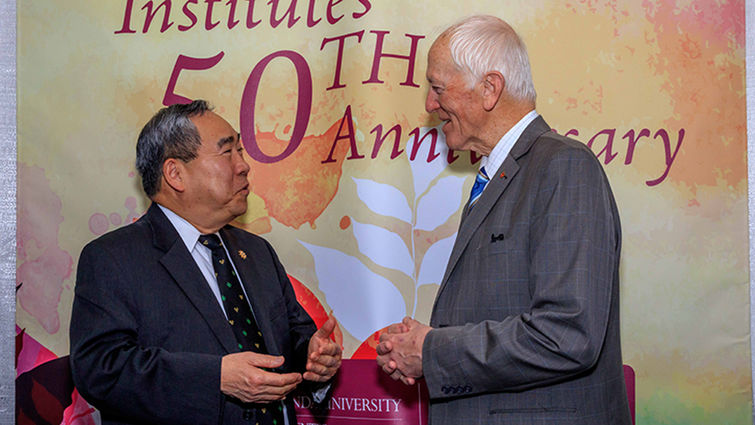 Loma Linda University Health celebrated its 50-year legacy of providing organ transplantation to inland Southern California, and beyond, during an anniversary luncheon Nov. 19 that highlighted the marvel of medical innovators and skilled surgeons as well as the generosity of donors and donor families.

“Loma Linda has been an important and critical part in this field for half a century,” said former acting U.S. surgeon general, and organ donation ambassador, Rear Admiral Kenneth Moritsugu, MD, MPH, in his guest keynote address.

But at the “heart of donation and transplantation,” he said, is the human element, a legacy made possible by everyday people. Organ donation, either by living donors or by deceased donors and their families, is the “greatest gift that one person can give another,” Moritsugu said.

“The ripples of donation and transplant cross the nation in this lifesaving quest,” he said.

This is demonstrated in the life of the aptly named Eve, who was the first female infant to receive a successful neonatal heart transplant, right here at Loma Linda. Her life was made possible by a baby boy named Eric in Georgia, who, though he didn’t survive, lives on in memory through the life of Eve.

She is now 31 and a mother of three children of her own.

“This is the meaning of the gift of life,” Moritsugu said.

Racing at times up to 100 mph, California Highway Patrol officers rushed a donated kidney to Loma Linda University Medical Center, where surgeon Louis Smith, MD, class of 1949, successfully transplanted the organ to save the life of Paul Anderson. The date was Sunday April 23, 1967, Anderson’s 100th day since starting dialysis.

At the time, long-term treatment with hemodialysis was not the option that it is today. Without the transplant, Paul Anderson would not have lived long.

Smith had trained for this moment with Joseph Murray, MD, the legendary surgeon who performed the first successful human kidney transplant in 1954 at Brigham and Women’s Hospital in Massachusetts. Murray would go on to receive a 1990 Nobel Prize for this feat.

Smith, in turn, trained many of today’s physicians and medical faculty members at Loma Linda University Health. One of his trainees was Roger Hadley, MD, who is now dean of LLU School of Medicine and executive vice president for medical affairs at Loma Linda University Health. Hadley recalled both Smith’s technical excellence in surgery and his communication skills with patients, their families and other medical staff.

Smith received the University Distinguished Service Award in 2003 for his contributions to medical science and training future generations, something Hadley saw to when he became dean of the School of Medicine that year.

Smith passed away in 2016, but his daughter, Patti Catalano, attended the anniversary celebration.

“I’m very honored to … see what has developed from what he did so long ago,” she said of her father. She recalled the memory from her childhood of her mother clipping a newspaper account of Smith’s milestone kidney transplant.

Video: Hear about the past, present and future of organ transplantation at Loma Linda University Health in the words of our leaders.

The biggest contribution Loma Linda University Health has made to the science of organ transplantation brought a global spotlight in 1984, when Leonard Bailey, MD, performed a revolutionary heart transplant on a newborn known as Baby Fae, implanting the heart of a baboon. Fae was the first infant in the world to receive a cross-species heart transplant, making medical history.

Previous attempts at other hospitals to perform infant-to-infant human heart transplants had failed. Bailey conceived the idea of transplanting a baboon heart out of his desire to save babies born with life-threatening heart conditions.

As media members and animal rights activities thronged outside the building, Bailey and the medical staff focused all their energy on the little girl.

Her first few days after the transplant proceeded amazingly well, Bailey said. But then she began a decline. “None of it made any sense to us,” Bailey said.

When Fae died on Nov. 15, 1984, they searched for answers, discovering that her death was not due to her rejecting the baboon heart.

Her heart, in fact, “was the last organ to fail,” Bailey said.

But in a sense, Baby Fae’s heart beats on, because Bailey would take the lessons learned from her life and go on to perform the world’s first successful infant-to-infant heart transplant in 1985 on a boy named Baby Moses. Now 32 years old, the same heart still beats in Moses’ chest.

“We truly stand on the shoulders of giants,” said Michael de Vera, MD, director of the Transplantation Institute.

“All physicians and more than 50 staff members are physically in one place,” de Vera said. “This allows us to work in unison toward our goals and provide more coordinated care, as well as better convenience for our patients.”

The institute has satellite clinics throughout the region, including the newly opened liver care clinic in Las Vegas, and service expansion will continue in 2018 with the opening of a satellite liver clinic in Orange County.

Two patients — one a living donor and one an organ recipient — shared their stories during the celebration.

Lyndsay Oneal called herself a proud member of the “one kidney club.” In 2015 she donated her other kidney to a friend in need of lifesaving. Oneal described three lessons she learned through the experience and shares today with her life coaching clients.

Human beings are all part of one big, great dance, Oneal said. When life plants an idea in the mind to help others, that is an opportunity specific for the person hearing it. And blessings of doing so will reverberate.

Another patient, liver transplant recipient Charles Price, said that the transplant team and in-patient staff are “some of the best people I’ve ever encountered in my life.”

Prior to seeking treatment at Loma Linda, Price felt his life slipping away as doctor after doctor, hospital after hospital, failed to diagnose his illness. When Loma Linda University Health correctly diagnosed him, he was put on the list for a liver transplant.

After his transplant, Price woke up with a clear head for the first time in a long time. Looking into the audience during the celebration luncheon, he saw some of the nurses who cared for him in the hospital.

“I can’t say enough but thank you,” he said. He also expressed deep gratitude for his liver donor, as well as the Transplantation Institute for helping him reach his “fifth re-birthday.”

De Vera said it was not coincidental that the 50th anniversary of transplantation at Loma Linda University Health was celebrated during the week of Thanksgiving.

He expressed thanks and gratefulness for the Transplantation Institute’s patients and for organ donors, both living and deceased.

“I am grateful, honored and privileged to do this on a daily basis,” de Vera said. “Transplant is truly a team sport.”

“Our mission is to touch lives of patients, and transplant does that in such a real way,” Heinrich said.

Moritsugu, the keynote speaker, summed up the impact of 50 years of transplantation at Loma Linda University Health: half a century of providing “helping, healing … caring and curing” in mind, body and spirit for donors, donor families, organ recipients and their families.

“Thank you for your half a century of trust and of life,” he said. 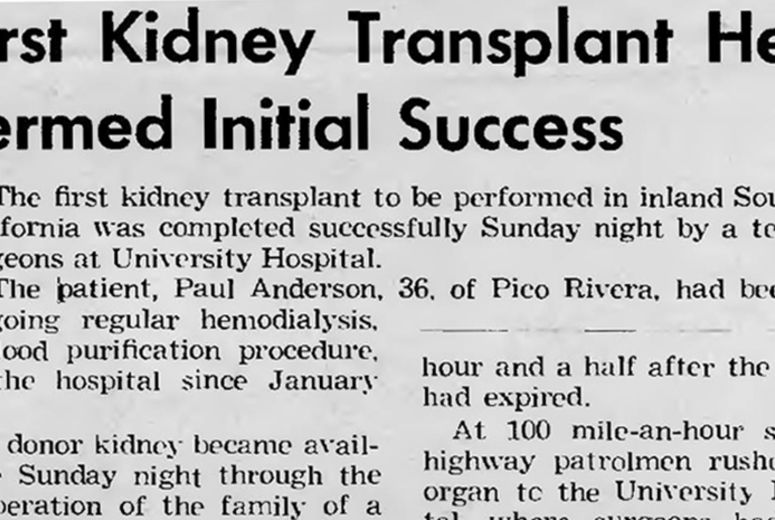 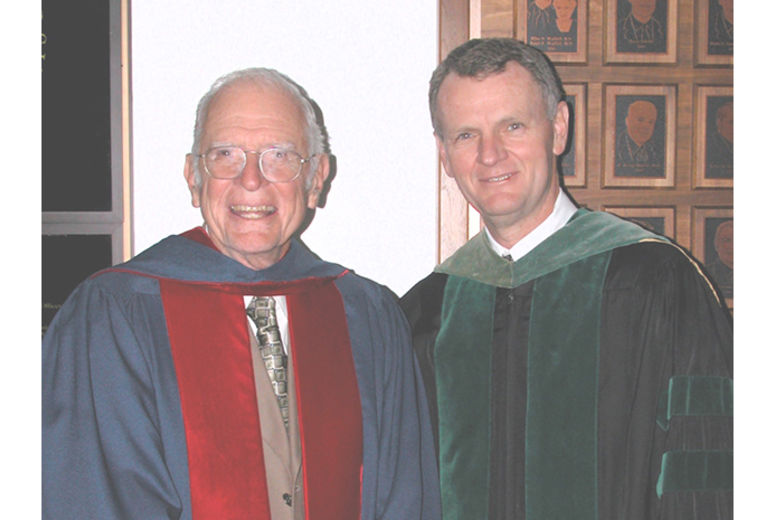 Louis Smith, MD, at left, received the University Distinguished Service Award in 2003 for starting organ transplantation at Loma Linda University Health and for mentoring generations of future doctors, including Roger Hadley, MD (right), dean of the School of Medicine. They are shown in academic regalia for the graduation ceremony in which Smith accepted his award. 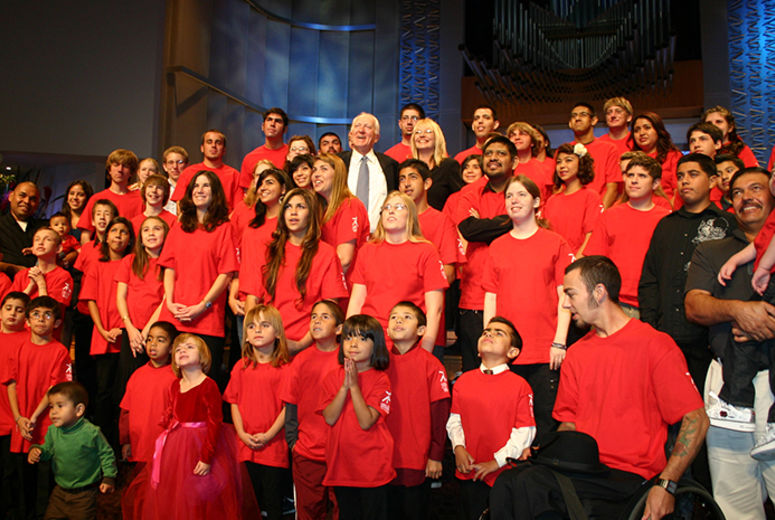 Children and young adults who had received heart transplants at Loma Linda University Health surround the pioneer of infant heart transplantation who made it all possible, Leonard Bailey, MD, and next to him, Teresa Beauclair, mother of Baby Fae, during a 2009 event commemorating the 15th anniversary of Baby Fae’s historic surgery. 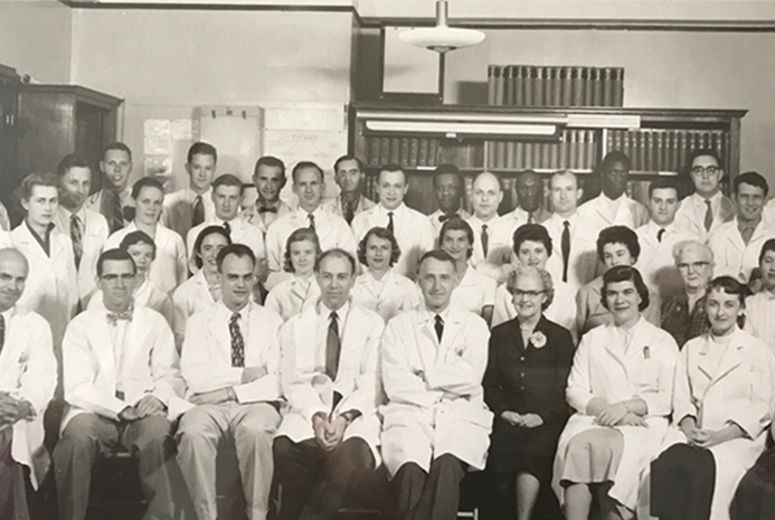 Louis Smith, MD, class of 1949, who performed the first kidney transplant at Loma Linda, is pictured (front row, second from left) sitting next to Joseph Murray, MD, who performed the world’s first successful human organ transplant — a kidney. This group photo was taken in 1958 in the laboratory of Francis Moore, MD, who was part of the team performing that first transplant. 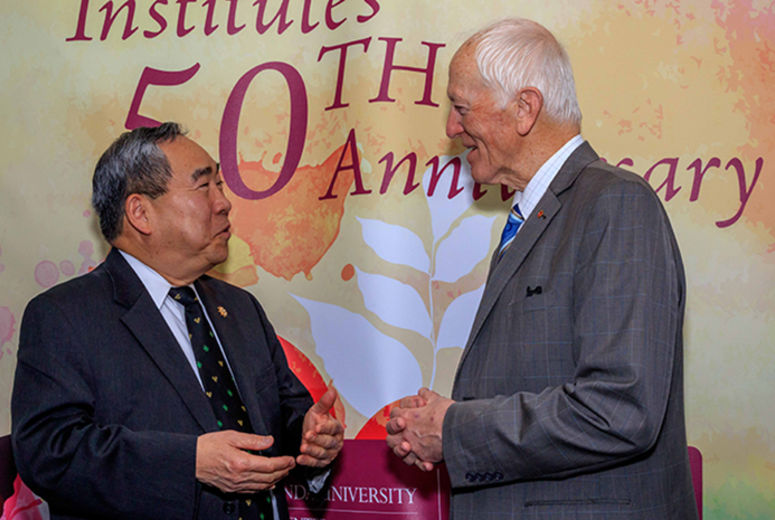 Infant heart transplant pioneer Leonard Bailey, MD, speaks with former acting Surgeon General Kenneth Moritsugu, MD, MPH, at the 50th anniversary celebration of organ transplantation at Loma Linda University Health. Moritsugu advocates for organ donation as both a public health issue and a personal mission. In separate vehicular accidents in the 1990s, both his wife and one of his daughters died. Knowing their donated organs helped others live brought solace to Moritsugu.