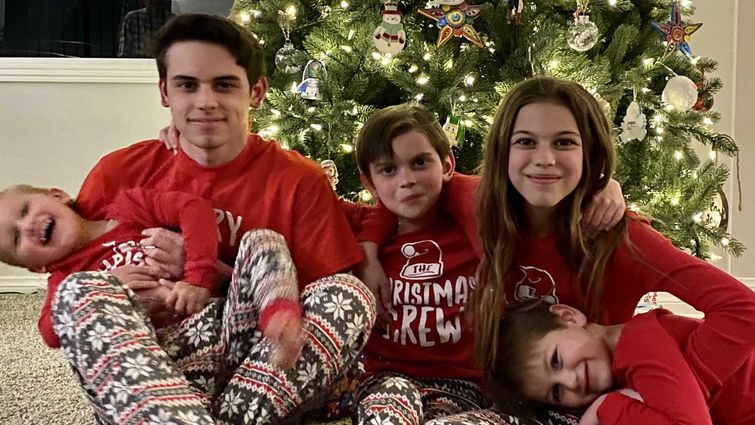 On September 16, 2020, Elijah Collins was minutes away from being pronounced dead by an emergency doctor at Loma Linda University Medical Center – Murrieta, after being unresponsive and receiving approximately 45 minutes of CPR. When all hope seemed lost, his heart started beating again.

To his parents’ knowledge leading up to the day of the incident, Elijah was a completely healthy 16-year-old boy — hardly ever sick, never needing medical attention.

The Collins family had gathered for a poolside barbecue, and although Elijah seemed a little tired, he was convinced to join his family in the pool. After playing in the water with his four siblings and swimming laps in the pool, something went wrong.

“All of a sudden, he flung himself backward while in the water, rolling to his side and seizing up,” his mother Meghan recalled. “His hands were clenched, and he was very stiff.”

He was quickly pulled from the water and continued seizing, making odd noises. Meghan remembers screaming for her husband as Elijah stopped breathing. While she called 911, Meghan’s husband and brother, both certified in CPR and first aid, took turns performing chest compressions.

Thirteen breathless minutes later, the sheriff and first responders arrived on the scene and took over CPR.

“In my mind, I just thought that help was going to get there and everything would be OK. I thought they would get Elijah to wake up. But he didn’t respond.” -Meghan Collins

Chest compressions never ceased from the moment Elijah was loaded into the ambulance to when he arrived at the hospital. It began to seem like Elijah was not going to survive, Meghan said, and one of the nurses prayed out loud for her son. His heart jolted back into action after 45 minutes of CPR. He was then airlifted to Loma Linda University Children’s Hospital in critical condition.

“We were still in shock,” Meghan said. “We had no idea why this had happened.”

After arriving at Children’s Hospital, the doctor explained the gravity of the situation to Elijah’s parents. Elijah had gone into full arrest for an undiagnosed cardiac reason, his liver was in shock, and he was in renal failure. His oxygen levels were dangerously low.

“I just remember telling the doctor how scared I was, and he asked if we were believers, which we said we were,” Meghan said. “So he prayed with us, and it’s things like that about Children’s Hospital that we treasure and are so thankful for.”

Because Elijah’s oxygen was so low, doctors started discussing the potential need to place him on ECMO, a machine that adds oxygen to a patient’s blood and pumps it through their body like the heart.

“He was maxed out on the machines, but his vitals and oxygen levels were not going up,” she said. “They explained that ECMO was the last resort for life support and was very serious, but in the situation we were in, it was the only option.”

Meghan and her husband were able to communicate with him a little while doctors weaned him off sedation to check his brain function. “I just remember telling him that I loved him, and he would shake his head yes,” she said. “I didn’t know if I was ever going to be able to tell him that again.”

With the guidance of Elijah’s doctors, Meghan and her husband made the decision to have Elijah placed on ECMO. His room began to be prepped for the procedure because he was too unstable to be moved to an operating room.

About 45 minutes later, the surgeon rushed out to Elijah’s parents to deliver the good news that Elijah’s oxygen had shot up.

“I know that it was God,” Meghan said. “His oxygen had hung so low all night long, and then it just shot up to where the doctors were comfortable enough to hold off placing him on ECMO and wait.”

Elijah remained ventilated for nine days. He was put on dialysis for his kidneys, but he never ended up needing ECMO. Elijah’s progress over 25 days at the Children’s Hospital continued to amaze the doctors and nurses caring for him. “They just couldn’t believe how quickly he was progressing,” Meghan said. “Even the transport helicopter pilot stopped by several times and was amazed at how quickly he was healing.”

Meghan is thankful for the care Elijah received at Children’s Hospital, specifically from the pediatric intensive care unit (PICU) team. “They truly walked with us through it all,” she said. “I felt I could trust that my child was in capable and caring hands. I would tell other parents that with the PICU team, you can count on being surrounded by people who genuinely love and support you and care about your child.”

Five months later, Meghan says Elijah is doing well — seemingly back to his normal self. However, the Collins family continues searching for answers about Elijah’s heart. He is still on the road to recovery and will need a lifelong continuance of care.

Despite the trauma, Meghan and her family have remained resilient and positive, seeking hope in the miracles and enjoying the blessing of Elijah’s life.