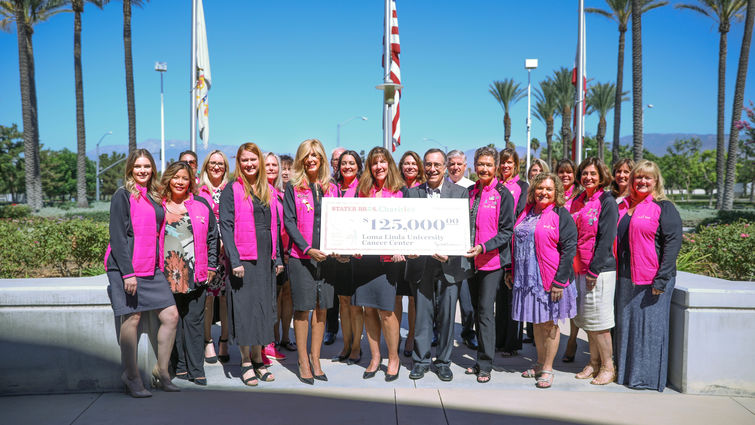 Stater Bros. Charities and Inland Women Fighting Cancer presented a check for $125,000 to Loma Linda University Cancer Center on August 20. The funds were a portion of those raised at the 11th annual Believe Walk in October 2018.

Judy Chatigny, MSN, executive director of Loma Linda University Cancer Center, said the donation will be used to support the psycho-oncology program, which assists with services not typically covered by insurance, such as psychologists, spiritual chaplains, financial guidance, dieticians, wig banks and the new offering of massage services for patients.

During the check presentation at Stater Bros. corporate headquarters, Chatigny said the Cancer Center is constantly finding new ways to serve patients. This year they have added a massage therapy service specifically for cancer patients. The therapists have been trained to service patients who are undergoing chemo.

In addition, Chatigny said the Cancer Center has hired a financial coordinator to help offer financial support to patients who need high-cost treatments. In 2019 alone, the center has received $2.6 million in free drug and co-pay assistance for patients.

“Patients face many challenges, and our focus at Loma Linda University Cancer Center is to help alleviate them in any way we can,” Chatigny said. “We are so very grateful for the continued partnership with Stater Bros. Charities and Inland Women Fighting Cancer, who help our patients thrive during some of the toughest times in their lives.”

“Many of us have had family members and friends who have received services at Loma Linda University Cancer Center, so we know firsthand how important the resources are to cancer patients in our community,” Negrette says. “We are proud to continue our partnership with the Cancer Center so they can continue the work they do for our community.”

The Believe Walk was created through the partnership of Inland Women Fighting Cancer founding members Cathy Stockton, Annie Sellas and the late Nancy Varner, along with Stater Bros. Charities.

Negrette said the first Believe Walk had 1,400 walkers in 2008. The walk has now grown exponentially to approximately 12,000 participants. Since its inception, the partnership between Stater Bros. Charities and Inland Women Fighting Cancer has donated over $5.1 million to support programs, services and equipment for cancer patients in the Inland Empire.

The 12th annual Believe Walk will take place in Redlands on Sunday, October 6.