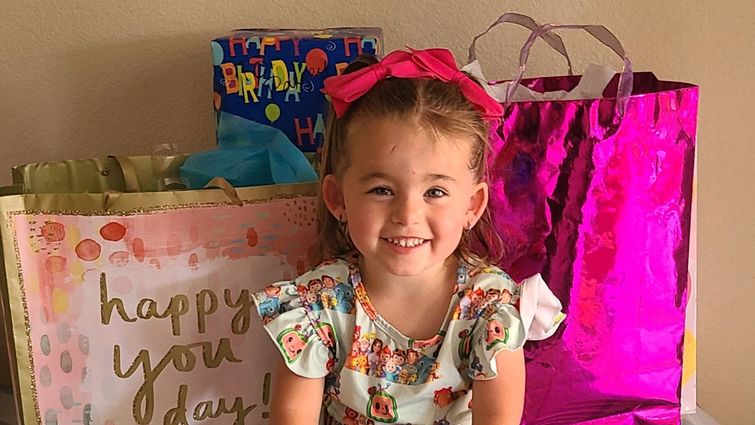 Three-year-old Payge is healthy and living in a loving, adoptive home — a dramatic turnaround after being rescued at age three months from neglect and malnourishment to the point that she weighed only six pounds and appeared skeletal.

“I look back at the scrapbook I’ve made of her photos and am shocked to see how tiny and sickly she was,” Huff says. “She was this emaciated baby so close to death and now she’s going to turn three and is just amazing — her personality, the fighting spirit she has. She’s come so far.” Doctors who cared for Payge told San Bernardino County Sheriff’s deputies that if they had not found Payge, she would have died within several days.

Payge was rushed to Children’s Hospital in July of 2018 after being removed from her home by deputies. Payge had been living with her biological parents in a trailer without water or electricity and sleeping in a urine-soaked car seat, says Morrissa Cardoza, a deputy district attorney for San Bernardino County.

“Payge’s dad would actually put alcohol in her bottle to try to get her to go to sleep faster and would also blow marijuana smoke directly into her face because she was fussy and hungry and crying,” Cardoza says.

Melissa Siccama, MD, a forensic pediatrician at Children’s Hospital, said Payge’s case was one of the worst she had ever seen and worried she wouldn’t survive.

“She had been starved for a period of time,” Siccama recalls. “She was dehydrated. She had a significant yeast infection on her skin under her neck, in her diaper area, and legs. She was very cachectic, meaning she had no subcutaneous fat on her body. You could see her ribs, her sternum — you could see her bones.”

Doctors like Siccama and Amy Young-Snodgrass, MD, who specialize in child abuse pediatrics at Children’s Hospital, were committed to Payge’s care and determined to help her survive. After 10 days in the hospital, Payge had improved and gained enough weight under the watchful and attentive care of the physicians, nurses, and staff that she was discharged to a foster family.

That family would become her forever home.

“I got the call to take in a three-month-old ‘failure-to-thrive,’” Huff remembers. “When I first saw her at the hospital, I immediately started to cry because she was so small. All of my foster babies have been failure-to-thrive [cases], but Payge was just so small and so sickly looking.”

From the first moment Payge clung to her finger, Huff wanted Payge as part of their family.

“I just knew from that day,” Huff says. “She just became part of us.”

Payge’s adoption was finalized in 2020. Now almost three years old, Payge is thriving in the loving care of her family.

Young-Snodgrass, also the chief of forensic pediatrics at Children’s Hospital, says they respond to approximately 2,500 cases of child abuse per year, but the numbers have risen during the pandemic.

“Just a few months into COVID-19, we started to see a drastic increase in the number of egregious cases of child abuse,” says Young-Snodgrass. “I’ve done this for 16 years, and within two to three months of COVID, we were seeing six to seven cases of severe child abuse a week, whereas we would normally have two cases a week.”

Children’s Hospital is committed to helping children disproportionately affected in the community by abuse, neglect, and other adverse childhood experiences to reach a place of wholeness, health, and safety.

To report child abuse, San Bernardino County residents can dial 2-1-1 to anonymously report or call the county hotline at 1-800-827-8724.