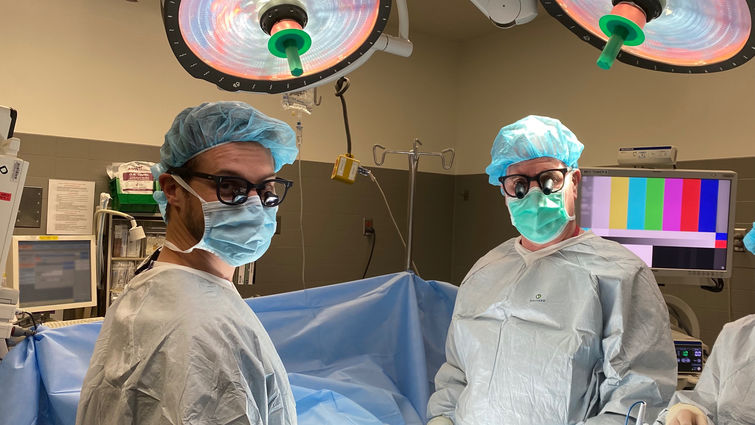 If one were to go into the office of the chief of pediatric urology at Loma Linda University Children’s Hospital, they would see a photo of Jesus standing behind a surgeon in the operating room, guiding his hands. David Chamberlin, MD, MS, FAAP, FACS, says this photo that was given to him when he first began at Children’s Hospital is representative of his journey in medicine.

Chamberlin grew up in southern California, married his high school sweetheart, graduated with a master’s in chemistry from BYU and his MD from UCI School of Medicine and completed residency at UCI Medical Center. During his first year of practice, Chamberlin was invited to be a part of a medical mission trip to Damascus, Syria. Unbeknownst to him, his role during the trip would be to conduct several complicated pediatric urologic surgeries.

“I prayed for guidance on that first day, and Jesus led me,” Chamberlin says. “That experience was a week of miracles. I was simply holding the instruments, hands being guided, and doing things I’d never done or seen before.”

Since then, he has helped the division grow to four pediatric urologists and four nurse practitioners, caring for patients throughout all the Inland Empire and the region. Additionally, his team conducts many telemedicine visits, with approximately seven million patients funneling to the Medical Center and Children’s Hospital from the Inland Empire.

“In all areas of pediatrics, we try to lose the tie and the white coat and meet kids on their own level,” Chamberlin says. “Our patients do really well — one of the blessings of operating on kids is they’re so resilient and positive.”

Chamberlin says he has relished the opportunity to work for a faith-based institution. “Just like the ‘Good Samaritan’ statue that sits outside the medical school, Christ’s parable speaks to me to ‘go and do thou likewise,’” he says. “That’s what sets this place apart for me — that Christ-centered focus to make man whole. I love that.”

One of the highlights of his career has been working with his son — Joshua Chamberlin, MD, who started medical school at Loma Linda University the same year Chamberlin began working for the organization. Joshua Chamberlin joined his father as a pediatric urologist for Children’s Hospital in 2019.

“Just the other day, we operated on a patient, and my son was assisting me,” Chamberlin says. “It was just such a career highlight for me. Here I am, 61 years old, working together with my son.”

Chamberlin says his time at Children’s Hospital has allowed him to continue his medical journey while enjoying time with his family — his wife of 40 years, six kids and sixteen grandkids.

“I look back on my career, and I see this pathway where Jesus has led me,” he says. “I am so grateful for my family, and I am so grateful for the opportunity to work at an institution where I get to be a disciple of Christ and become more like Him.”