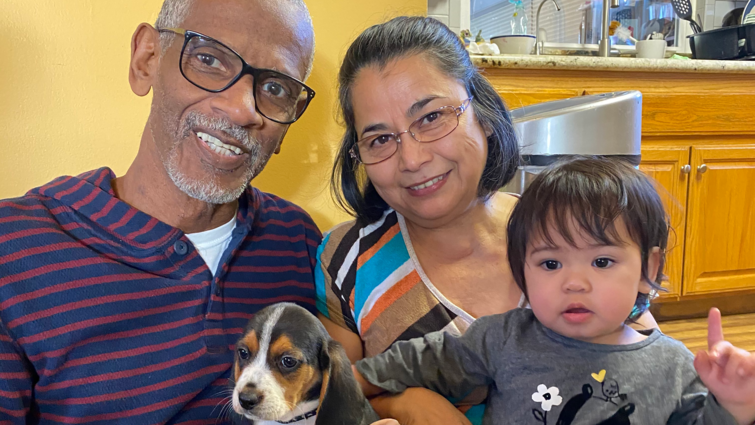 Everett Roberts has returned to his loved ones — pictured here from left: Everett and the family dog, his wife, and his granddaughter — after undergoing a robotic mitral valve repair at Loma Linda University Health.

Everett Roberts was discouraged upon hearing from physicians at a medical institution that he had a 40% chance of surviving an open heart surgery to repair his failing valve. Yet the 71-year-old veteran’s spirits lifted when cardiothoracic surgeon Joshua Chung, MD, FACS, offered him a safer, less invasive option — repairing the mitral valve via robotic surgery.

“Dr. Chung told me the chances of things going wrong were around one to two percent — that’s way better than 40%,” Roberts said. “I shudder to think of what almost could’ve been had I not gone to LLU for my care.”

Located on the left side of the heart, a mitral valve warrants repair when it is no longer able to properly function due to leakage causing blood to blackflow from the heart into the lungs. Such was the case for Pomona resident Roberts, whose mitral valve was leaking half of his oxygenated blood back towards his lungs.

He soon struggled to run his routine five-mile course every other day, as he had done most of his life. Dissatisfied with the high risk of open-heart surgery, compounded by his chronic lymphocytic leukemia (CLL) diagnosis, Roberts said he sought care from physicians at LLU who could provide robotic mitral valve repair.

That noninvasive procedure changed my life for the better — I know that for a fact.Everett Roberts

During a robotic mitral valve repair, a cardiac surgeon’s hands control the movement of surgical instruments attached to a machine’s thin, robotic arms. The procedure leaves small two-inch incisions on the right side of the chest, as opposed to six or eight-inch scars in the middle of the chest through the breastbone associated with traditional open-heart surgery. Aside from smaller incisions, Chung said mitral valve repairs conducted robotically hold other advantages to open-heart surgery for patients, including less invasion and risk, reduced bodily stress, faster recovery time, and excellent outcomes.

“If I hadn’t gone to LLU, I wouldn’t be doing the things I want to be doing,” Roberts said. “That noninvasive procedure changed my life for the better — I know that for a fact. I’d advise anyone who has the option to do the procedure to definitely do it.”

Whereas six months prior to surgery Roberts said he could barely walk a mile, he now reports having trekked 162 miles in the four months after his surgery — not to mention indulging in some dirt biking and golfing as well. A “tinkerer” by nature, Roberts said he has since been able to tackle home projects such as tuning up motorcycles and assembling a snowblower for use at his mountain cabin. Most of all, Roberts said he cherishes the time he’s been able to spend with loved ones, including his wife, children, and grandbaby.

We are ready to take on more of these procedures and continue to help patients whose lives could be saved from this kind of intervention.Dr. Joshua Chung

Roberts became the fourth patient to undergo the procedure at the hospital in October 2020. He said he appreciated the care team’s skilled communication skills and compassion, which he felt most strongly when nurses prayed with him during his hospital stay. Raised a Seventh-Day Adventist himself, Roberts said the touching gesture hit close to home.

“Thanks to Dr. Chung and the team who took care of me, I will have a long and heart-healthy future,” Roberts said.

Since its first robotic mitral valve replacement in September 2020, Loma Linda University International Heart Institute has been the only center to offer the procedure in the Inland Empire — a service that Chung said is beneficial for residents of the region who need not travel to faraway counties to obtain the care they need.

“We are ready to take on more of these procedures and continue to help patients whose lives could be saved from this kind of intervention,” said Chung, who serves as vice chair of the Department of Cardiothoracic Surgery and Director of Adult Cardiac Transplantation and Mechanical Circulatory Support at the International Heart Institute.

If you would like to partner with a physician to learn more about the disease and treatments, visit the International Heart Institute’s website or call 800-468-5432. 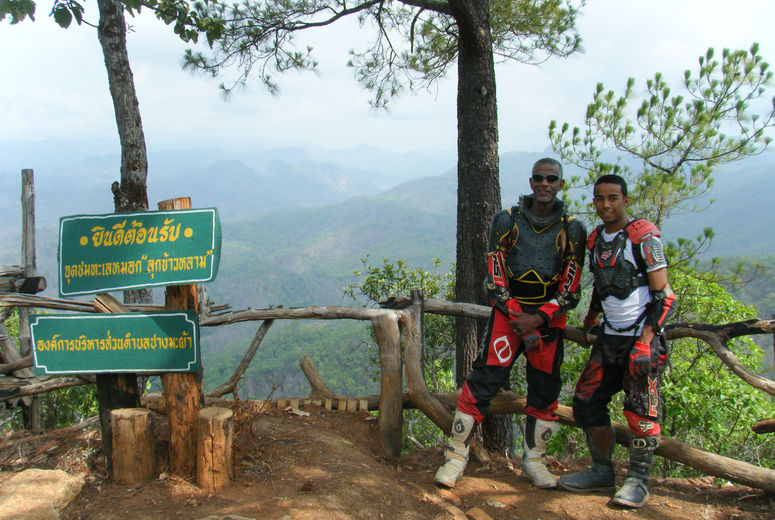 Everett and his son riding dirt bikes in Thailand 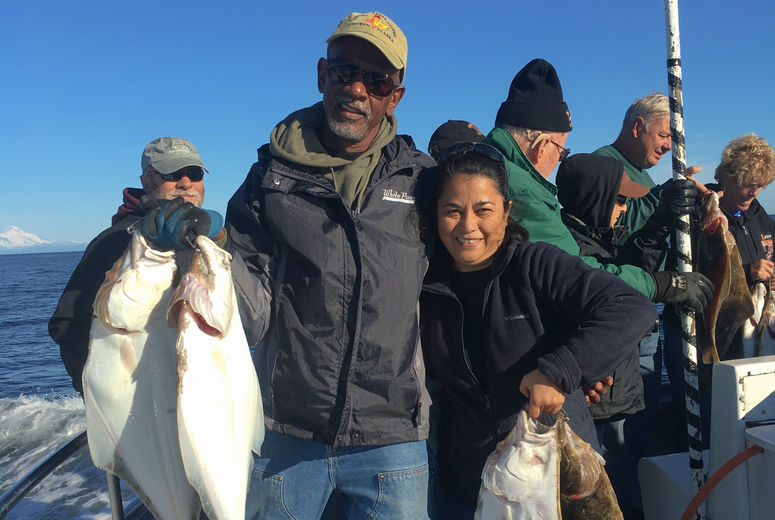 Everett and his wife hold freshly caught fish on a boat in Homer, Alaska 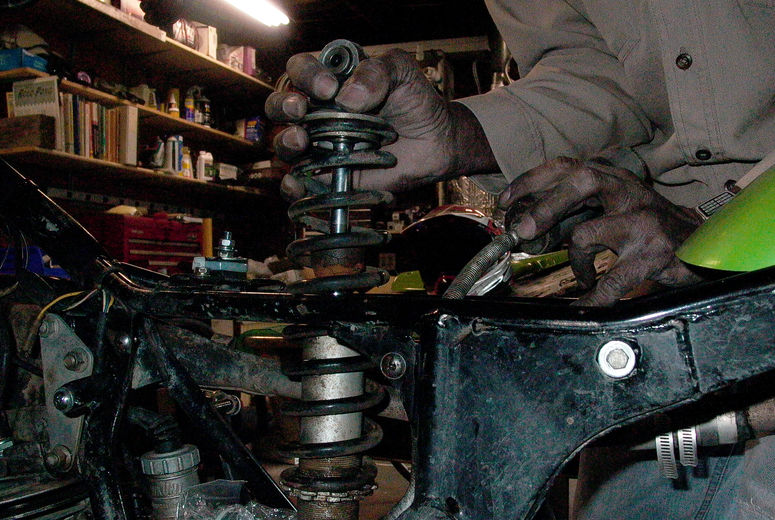 Everett doing a dirt bike tune up in his garage 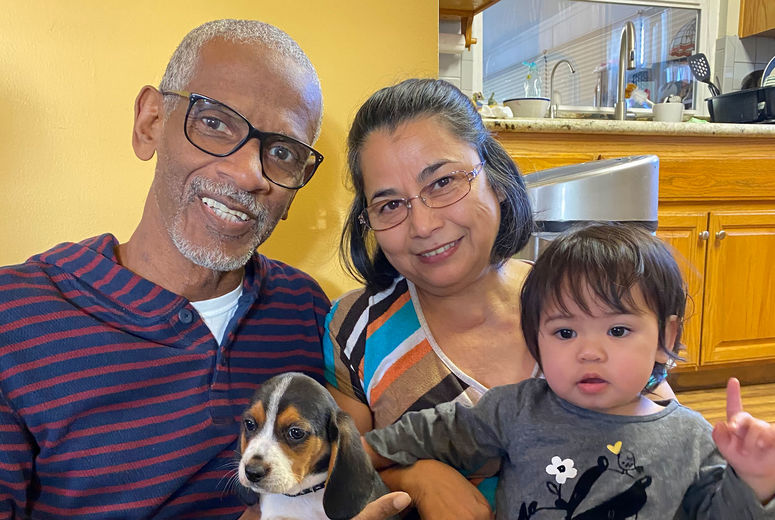