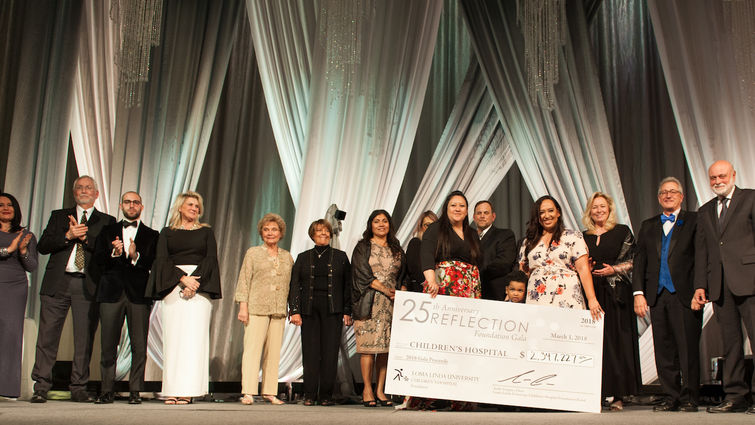 The grand finale of the 25th Anniversary Reflection Foundation Gala was the check presentation for over $2.34 million.

The 25th Anniversary Reflection Foundation Gala, presented by Walter’s Automotive Group, was an evening to remember, raising an unprecedented $2.35 million.

The theme, “Reflection,” celebrated the first 25 years of Loma Linda University Children’s Hospital (LLUCH) and highlighted its bold plans for the future.

Scott Perryman, senior vice president/administrator of LLUCH, addressed guests saying the future is not possible without their support.

“Celebrating 25 years of giving is a major milestone and it would not have been possible without your tireless effort on our behalf over the last two and a half decades.,” Perryman told the more than 1,000 guests in attendance. “In that time, you have raised nearly $20,000,000! Every single one of those dollars has been part of giving world class care to the children in your community.”

Funds raised will benefit Vision 2020 – The Campaign for a Whole Tomorrow, which supports construction of the new Children’s Hospital tower and Loma Linda University Children’s Health – Indio Jill and Barry Golden Pavilion. The latter is slated to open March 12.

Richard H. Hart, MD, DrPH, president of Loma Linda University Health, dedicated the evening to Leonard Bailey, MD, pioneer of infant heart transplantation; Lyn Behrens, MD, former president of Loma Linda University Health; and John Mace, MD, chair of pediatrics when LLUCH first opened its doors, for their vision of a hospital just for kids. “They set the standard for excellence that has guided the hospital to be what it is today,” Hart said.

Physicians were not the only individuals recognized. Four awards were presented to individuals and groups who have made significant dedications to the lives of children.

Lopez was the living donor who dedicated one of her kidneys to three-year-old Matthew Castleberry, whose story was shared with attendees. Castleberry, who also has a twin sister, began receiving treatment at LLUCH while in utero due to kidney complications. On dialysis since birth, Castleberry received the life-saving kidney he needed from his mom’s friend and former co-worker.

After hearing the encouraging story, guests were encouraged to donate to support LLUCH in its mission to provide quality, whole child care to every patient.

It was during this time that an anonymous donor gave $1 million toward the upcoming LLUCH – Indio clinic.

Eight items were sold during the live auction, including two original paintings, each selling for $24,000, by Jeff Hanson, a visually impaired artist. Hanson is an award-winning philanthropic artist on a mission to change the world through art and has a goal to raise $10 million before he is 30.

The evening concluded with a celebratory presentation of the check on stage that included hospital staff, patients, Guild members and donors.