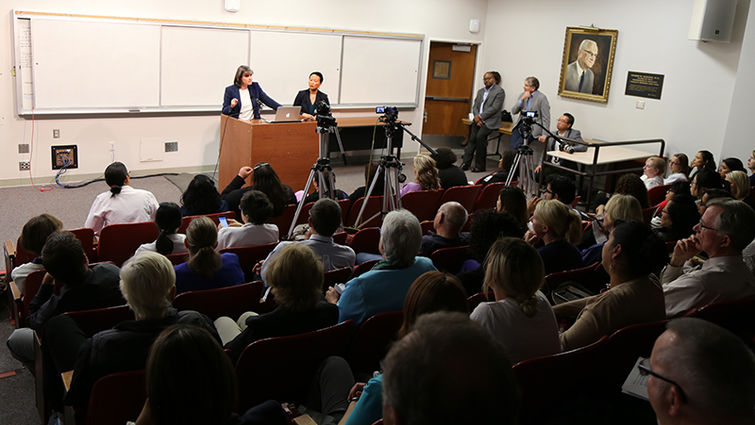 Drs. Gina Mohr and Grace Oei spoke to a full room about Loma Linda University Health's decision to opt out of California’s End of Life Act. The session can be viewed online at religion.llu.edu/bioethics/.

The city of Loma Linda has been identified as a blue zone—a place where the world’s longest-lived people reside. It may seem surprising that in this most-desired place where longevity is studied and sought after, there is interest in California’s End of Life Option Act.

Even before June 9, 2016, when California’s End of Life Option Act took effect, conference rooms and classrooms at Loma Linda University Health were filled to capacity for meetings including Spotlight on Health Policy grand rounds where the law was discussed.

Realizing the there would be interest in hearing the information presented by Loma Linda University Health specialists Gina Mohr, MD (palliative care), and Grace Oei, MD, (ethics and pediatric critical care), a video was made of the grand rounds. It is available at religion.llu.edu/bioethics/.

The Spotlight on Health Policy was attended by physicians, nurses and allied health professionals who, during their extensive careers have journeyed with patients through terminal illnesses. Also in attendance were medical residents and students who may have interacted only briefly with patients who are nearing the end of life.

Loma Linda University Health is a Seventh-day Adventist institution, and Mohr and Oei shared guidelines that would be followed should a patient request information about aid-in-dying. Based on its ethical principles LLUH has decided not to participate in providing terminally ill patients with prescriptions for lethal drugs.

While California law states that hospitals, physicians and pharmacists may opt out when such a request is made, they must refer patients to providers who can respond to the request.

In Oregon, where similar legislation (the Death with Dignity Act) was passed Oct. 27, 1997, just a few physicians have opted in. A major hospital chain in California that will assist patients who request aid-in-dying, less than one percent of the physicians have opted in. In cases where aid-in-dying medication has been used, the death certificate will state that the disease, not the medication, caused the death.

Mohr emphasized that doctors should reassure their patients who are living with terminal illnesses that medical care will continue—it is never withdrawn. She encouraged caregivers to act with compassion, asking open-ended questions, requesting an ethics consult if needed, and suggesting options to the patient including referral to palliative care.

Note: The grand rounds was attended by LLUH faculty, physicians, allied health professionals and students It was sponsored jointly by the Center for Christian Bioethics and the Center for Palliative Care. “Opting Out: Loma Linda University Health (LLUH) responds to California’s End of Life Act” which contains detailed information and a question-and-answer session, may be viewed online: religion.llu.edu/bioethics/.