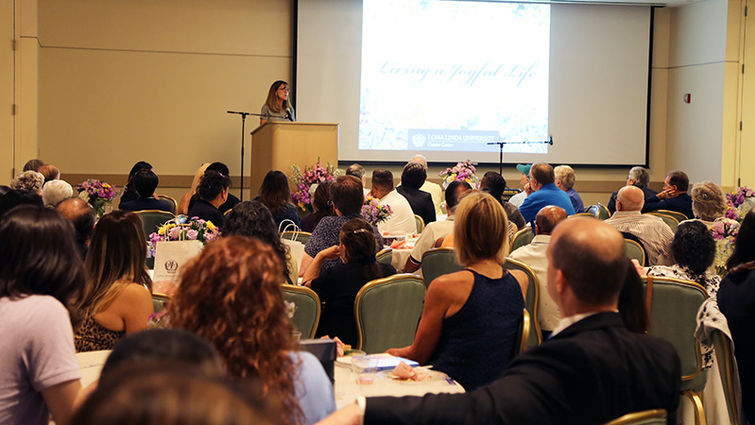 New treatments offer expanded possibilities for cancer treatment, the director of Loma Linda University Cancer Center told a gathering of cancer survivors, their families and members of the community earlier this month.

The center’s director, Mark Reeves, MD, PhD, said that for the first time a drug to treat cancer has been approved not based on where in the body the cancer started, but based on what mutations the cancer has.

He also revealed that the Loma Linda University Cancer Center is performing research with the National Cancer Institute to dramatically expand this paradigm to multiple mutations and many drugs to target those mutations through the institute’s ongoing MATCH trial. The center is also participating in approximately 75 other clinical trials, he said.

Reeves made his remarks during the 26th annual Celebration of Life, which is an annual event that takes place in June. Judy Chatigny, MSN, Executive Director, Loma Linda University Cancer Center, served as emcee for the June 4 program, which was held in the Wong Kerlee International Conference Center.

During the celebration, Reeves shared news about new programs in the Loma Linda University Cancer Center.

“We’re adding to those capabilities so we can treat a wider variety of patients with brain tumors,” he said.

In the first few weeks of the program, nearly 40 patients have completed the screening process.

“This means that of the people who completed the screening process, one fifth of those patients at risk of dying who complete the program are not going to die,” Reeves said.

Living with resiliency and hope

The Manzes explained why they chose to travel to Loma Linda from Florida for treatment — Jeffrey Manz for proton therapy after being diagnosed with prostate cancer 15 years ago, and more recently Vickie Manz for breast cancer treatment.

While the Manzes could have chosen other top cancer centers, “The treatment at Loma Linda is different,” she said. “The treatment across the board takes into consideration the whole person. Loma Linda has been wonderful; it is a place where the staff celebrate life.”

Participants also learned how to create resilience in their lives as Barbara Hernandez, PhD, LMFT, RN, director of physician vitality at Loma Linda University Health, spoke about living a joyful life. “We can actually nurture joy in our own lives by dedicated efforts that foster gratitude, optimism, practicing spiritual disciplines such as prayer, and by intentionally adding value to other peoples’ lives,” said Hernandez.