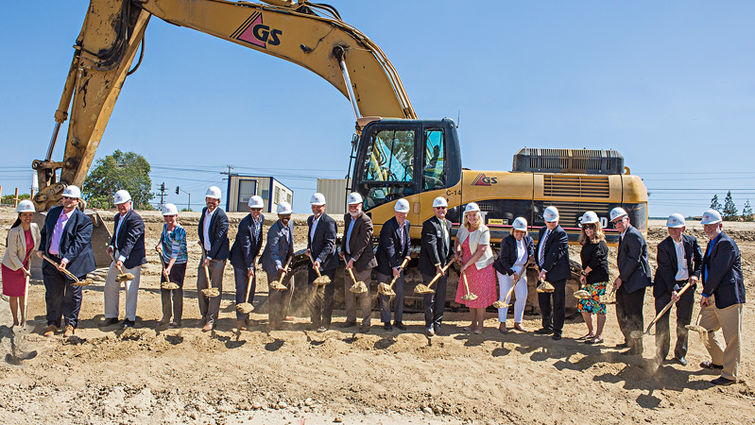 Loma Linda University Health (LLUH) has officially broken ground on the hospital complex that will house the new adult hospital and expanded Children’s Hospital. Over 3,000 people looked on as the shovels hit the dirt at the community groundbreaking event Sunday, May 22.

During the program, Richard H. Hart, MD, DrPH, president, LLUH, recapped the history of the organization saying, “This institution was built through stages by visionary leaders who took the realities of their day and molded them into a strategy for the future.

“Our hospitals are where our beliefs are put into action,” Hart continued, “where our knowledge, our expertise, and our compassion come together to restore lives and families.”

Hart also announced the new hospital complex will be named after Dennis and Carol Troesh who donated $100 million toward the philanthropic campaign benefiting the new hospital, Vision 2020: The Campaign for a WHOLE tomorrow.

“The new Loma Linda University Medical Center and expanded Children’s Hospital, which will be on the Dennis and Carol Troesh Medical Campus, will be an immediately recognizable icon for our region,” Hart said. “More importantly, it will exemplify the best in medical expertise and compassionate whole person care as we transform lives in this region and around the world, toward a healthier tomorrow.”

Rachelle Bussell, CFRE, senior vice president of advancement, LLUH, broke the news that more than $225 million has been raised toward the $360 million goal of the campaign. “Vision 2020 is the catalyst that brings together our vision for a whole tomorrow,” she said.

The new hospital complex, which will open its doors to the community in 2020, has been designed by architecture firm NBBJ to embrace a healing environment, from wellness gardens that support physical, social and spiritual health, to patient rooms that promote patient and family healing, nursing stations that encourage collaboration and community spaces filled with natural light.

“The design promises to set a new standard for health care and hospital architecture,” said Richard Dallam, FAIA, partner in charge of the project at NBBJ.

“As the health care industry transitions from a treatment-based model to one focused on preventive health,” Dallam added, “it’s a privilege to partner with an organization like Loma Linda University Health, which like us has practiced advanced care models for decades.”

Dallam noted that the design of the new hospital will further enhance health for patients in Southern California and beyond by connecting them and hospital staff to the natural environment, the wider community and God, all in support of Loma Linda’s motto “To Make Man Whole.”

Kerry Heinrich, CEO, LLU Medical Center boasted how behind the walls of the new hospital facility, new discoveries will be made that will advance medical care. Standing 16 floors and spanning a distance longer than a football field, this facility, Heinrich said, “will be an instantly recognizable icon. More importantly, it will stand as a beacon of hope for all of us, and especially those who are facing their darkest hour.”

The hospital will not only be the tallest building in San Bernardino County, but it will also be considered one of the safest in the state. The project is implementing a first-of-its-kind vertical earthquake isolation system which separates the building from the ground using more than 500 vertical shock absorbers; a large-scale version of a modern car suspension system. Working hand-in-hand with a lateral earthquake isolation system of sliding bearings and dampers, the system will protect patients and staff from injury while keeping the hospital operational following a potentially catastrophic magnitude 7.9 earthquake on the nearby San Jacinto Fault.

The Campus Transformation Project will be the first major building in the world to implement this state-of-the-art 3D earthquake protection technology.