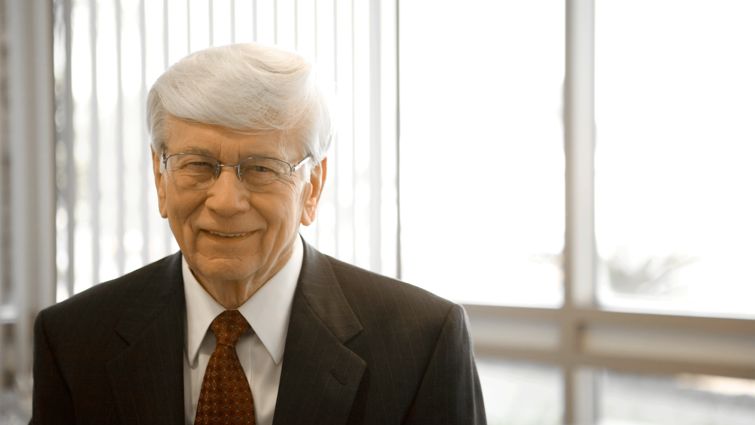 James M. Slater, MD, whose determination to improve the quality of life for patients undergoing cancer treatment inspired him to use proton therapy for patient care and to champion and oversee creation of the world’s first hospital-based proton treatment center at Loma Linda University Health, died Dec. 26. He was 89.

The James M. Slater, M.D. Proton Treatment and Research Center — which opened in 1990 — has since treated more than 18,000 patients from around the world, including foreign royalty, celebrities, and even an NBC news reporter who in 2008 chronicled his own battle with cancer and search for treatments.

Proton radiation treatment, the most precise and advanced form of radiation therapy available, allows physicians to deliver full or higher treatment dosages to destroy a tumor with minimal side effects to a person’s surrounding healthy tissue or organs.

In 1986, the Loma Linda University and Loma Linda University Medical Center Boards of Trustees approved Slater’s request to work with Fermi National Accelerator Laboratory (Fermilab) to begin planning the LLUMC Proton Treatment Center, which would result in the construction of the most expensive piece of medical equipment that had ever been built. The issue was one of the most disputed items the board would ever deliberate.

In 1989, the year the first particle accelerator (synchrotron) components were shipped to the Loma Linda University Health campus from FermiLab, controversy about the new treatment raged, becoming the focus of a March 17 Wall Street Journal article, Off the Beam? Proton Device to Fight Cancer Is a Boondoggle — or a Breakthrough. The story, while acknowledging that the Food and Drug Administration had approved proton therapy as a cancer treatment, referred to the Loma Linda synchrotron as a “contraption.”

The debate took place at the national level not only because of the fear that proton treatment would be ineffective or that it would cause cancer patients to have false hope, but because in part, it was being funded with millions of dollars from the U.S. Congress and the U.S. Department of Energy.

When the Loma Linda University Medical Center Proton Treatment Center opened in 1990, it was the only place in the world to offer proton therapy for patient treatment and research in a hospital setting. It would remain the only hospital-based treatment center of its kind in the United States until 2003. In 2007, it was renamed the James M. Slater, M.D. Proton Treatment and Research Center in his honor.

The realization of Slater’s resolve to ease cancer patients’ suffering was captured in Beam of Hope: The Story of Proton Therapy at Loma Linda University Medical Center, by Richard A. Schaefer. The Wall Street Journal in February of 2005, nearly 16 years after a previous article had harshly questioned proton therapy, published an article, Proton-Beam Therapy for Cancer, which listed quality-of-life issues among proton therapy’s most important benefits. Patients in Massachusetts and Indiana were receiving proton therapy at facilities in their states and additional facilities were under construction in Texas and Florida.

Today there are approximately 25 proton therapy centers in operation, with another 11 centers under construction or in development, according to the National Association for Proton Therapy.

“Dr. Slater will be memorialized by his development of proton therapy, but I will remember him even more as the consummate gentleman, always ready to listen and assist younger faculty and staff in pursuit of their dreams,” said Richard Hart, MD, DrPH, president of Loma Linda University Health. “His gentle spirit and deference to others made him a natural leader on our campus.”

James Munroe Slater was born in 1929 in Salt Lake City, Utah. His parents both attended the University of Utah, and his mother earned a degree in elementary education from the university in 1927.

Slater’s earliest comprehension of the world of science came as a third-grader, according to Richard A. Schaefer, historian for Loma Linda University Health. He was fascinated as he heard stories of scientists and inventors his teacher, Miss Emma Evans, read to the class every day. At 14, Slater worked with the U.S. Forest Service in Utah, earning the crew’s respect as they observed his precision driving immense tractors. He later worked as a truck mechanic, vacuum cleaner repair shop owner and a miner.

Intrigued by the importance of physics in society, he applied to the University of Utah, graduating in 1955 with a bachelor’s degree in physics.

Slater then taught math in a junior high in Fontana, California. Medicine had always intrigued him, and when a neighbor suggested that he consider becoming a doctor, he applied to Loma Linda University School of Medicine.

Following graduation in 1963, he trained as a resident at both LDS Hospital in Utah and White Memorial Medical Center in Los Angeles. Further narrowing his interests, he moved to Texas where he completed a National Institutes of Health Fellowship at University of Texas MD Anderson Cancer Center. It was during his fellowship when his interest in heavy-charged particle therapy began.

Slater described the compassion he felt for his patients in a documentary, The Convergence of Disciplines. During his residency training in radiology, he said, “[It] was a shocking experience to see how ill we made our patients. During treatment they became very, very sick. Some of them had to stop treatment and recuperate for a week or so before they could come back. This reduced their chance for a cure and caused misery for them as an individual and for their family.”

Determined to find a place where he could make major changes he felt were needed in radiation medicine, Slater accepted the invitation to return to Loma Linda University Health in 1970.

There he pioneered computer-assisted radiotherapy planning, developing CT-based treatment. He introduced the first such system in 1971, earning him a first-place award from the European Association of Radiology in 1975 and an invitation to speak at the U.N. International Atomic Energy Agency in Vienna, Austria. In 1978, he received the first-place award from the American Society of Therapeutic Radiologists.

Determined to do even more to spare healthy tissue during cancer treatment, he began investigating proton radiation therapy, visiting accelerator companies around the world. As he shared what he needed and invited them to work with him he was surprised when they said no, telling him the complexity was more than they were prepared to attempt.

Eventually Fermilab agreed to work with Slater, and in 1986 was granted permission by the overseeing boards at Loma Linda University Health to proceed.

Costs for the project skyrocketed, and Slater began working with U.S. Congressman Jerry Lewis and testified during a congressional hearing. Lewis said in the documentary, “We were requesting $25 million. After the hearing, we went to the committee session with the Senate and got $25 million. And it was a direct result of the presentation of Dr. Slater.”

When it was complete, the center was a $100-million, three-story facility. The equipment, including the accelerator and the proton guidance system, weighed 400 tons and produced up to 250 million electron volts of radiation.