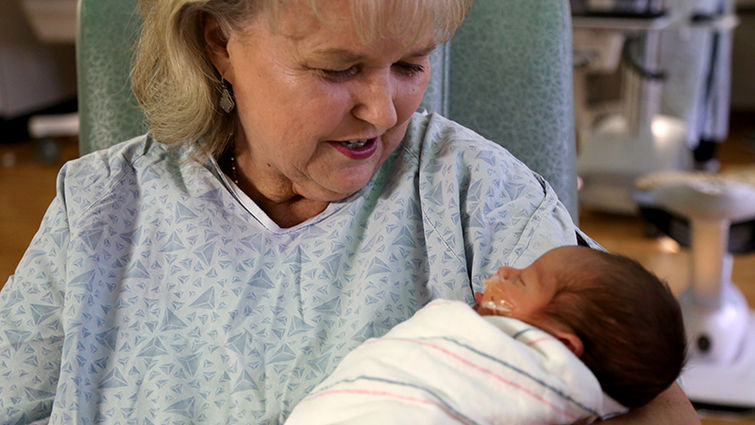 Linda Hunt reaches into a crib and picks up Baby Conor, a week-old infant boy in the neonatal intensive care unit (NICU) at Loma Linda University Children’s Hospital. He was acting fussy before she arrived, but Hunt’s soft voice and the gentle way she holds him have an immediate calming effect. In a matter of moments, he relaxes in her arms and falls asleep.

Born five weeks prematurely, Baby Conor lacks a crucial survival skill that comes naturally to babies born later in gestation: knowing how to eat. Fortunately for him, the staff of the NICU takes care of his nutritional needs intravenously or with a feeding tube. Equally fortunate is the fact that Hunt is there to help meet his needs for bonding and human contact.

One of a carefully screened, highly trained group of volunteers known as baby snugglers, Hunt gets to do things she absolutely loves: holding babies, snuggling them, talking to them, and loving them. She also gets the satisfaction of knowing she is giving the babies a scientifically-validated head start in life.

“I just love the feel of babies,” Hunt says. “I feel good knowing they will be able to handle stress better because of snuggling.”

Raylene Phillips, MD, first brought the volunteer snuggler program to the NICU in the mid-1990s, and personally trained the first 100 volunteer snugglers on the policies involved in being a baby snuggler and how to be responsive to the babies’ behavioral cues of stress and relaxation. After leaving for medical school in 1999, she returned for her residency and fellowship programs and is now a neonatologist in the same NICU where the baby snuggler program she started continues. Some of the original volunteer snugglers she trained still come to the unit regularly to comfort babies.

Phillips, who holds a master’s degree in developmental psychology, has studied the neuroscience of stress and stress management in infants. She points out that the way you comfort a premature baby is different from the approach to comforting a full-term baby.

"For a full-term baby, rocking and patting soothes them. But for babies born prematurely, that amount of stimulation can add more stress,” she says. “Prolonged periods of elevated cortisol levels due to long periods of stress are actually neurotoxic, but snuggling helps reduce stress.”

She adds that parents are the best antidote for stress in infants, but snugglers are a good second best. “Just having someone to hold them and comfort them really lowers their stress,” she says.

Phillips says human newborns, like infants of all primate species, expect to be in direct body contact with their mothers at all times. When that isn’t possible, babies still need to be held close by someone who cares for them.

Vicki Stalker, who has been snuggling for just under a year, finds snuggling to be therapeutic for snugglers as well as babies.

“No matter how bad a day you’ve had, you come in and pick up these babies and hold them and soothe them and calm them and it makes a big difference in your day,” she says.

Stalker learned first-hand about the difficulties faced by parents of NICU babies after her niece was born with congenital defects and had to be admitted to a hospital in Oregon. The girl’s mother had to work full-time at a job four hours away in order to keep the insurance that paid for her baby’s care.

Baby Conor’s mom, Lorena Watson, would love to hold him all day long, but logistics get in the way. Watson works as a licensed vocational nurse in the High Desert and has other children at home. Although she comes to see Baby Conor every day, she admits it can be difficult. She is grateful, for the love he receives from the snugglers.

“I think it’s pretty awesome that you have the baby snuggler program here,” Watson says. That way, they get the individualized attention they need even when parents can’t be here.”

Some babies aren’t as fortunate as Baby Conor. Some are experiencing withdrawal from opioids they were exposed to during gestation if their mothers were addicted to narcotics; others are victims of abuse and will be going into foster care once they’re discharged.

Donna Hadley, who has been snuggling for two years, says working with babies withdrawing from intra-uterine opioid exposure is difficult emotionally.

“You just cuddle them and cuddle them,” Hadley says. “Even their cry is different. It’s very high-pitched. They sneeze a lot, too. Tears start flowing when I hear of babies that come from abusive situations.”

One recent morning, Hadley held Baby Adree, a bright-eyed, 7-month-old girl who has lived in the NICU all her life. She was born with gastroschisis — an increasingly common condition in which the intestines protrude through an opening in the abdomen and develop outside the body during pregnancy — and has required several surgeries. Nevertheless, her traumatic circumstances have done little to dampen her enthusiasm. She smiled broadly at Hadley and reached out to touch her face.

Hadley says volunteering on the NICU is something of a homecoming: she worked as a nurse on the unit 38 years ago.

Linda Hunt says she feels a profound spiritual connection to the babies she snuggles.

Once she settles in with a baby, the first thing she does is pray for them and the nurses. Then she softly sings the song, “Jesus Loves You.”

Hunt also prays for every one of those babies every single day.

“I’m still praying for the first babies I snuggled here seven years ago,” she says. “It’s really an honor to do that. It’s an honor to snuggle, too.” 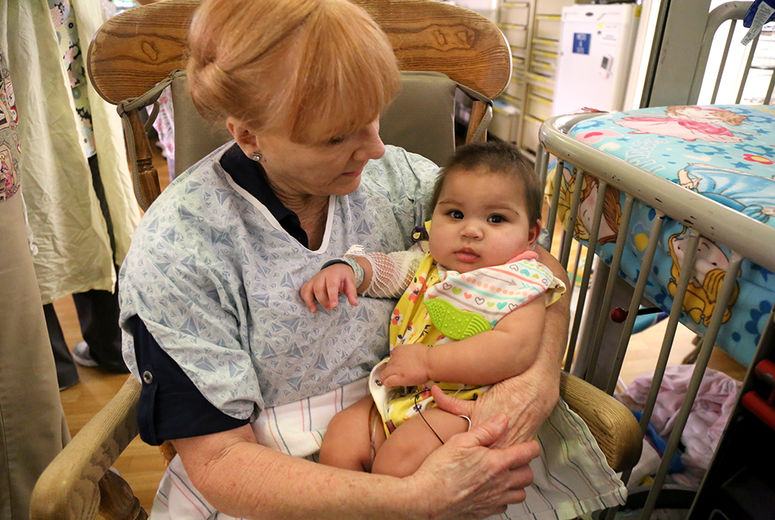 "The best part about being a baby snuggler," Vicki Stalker says, "is snuggling babies." 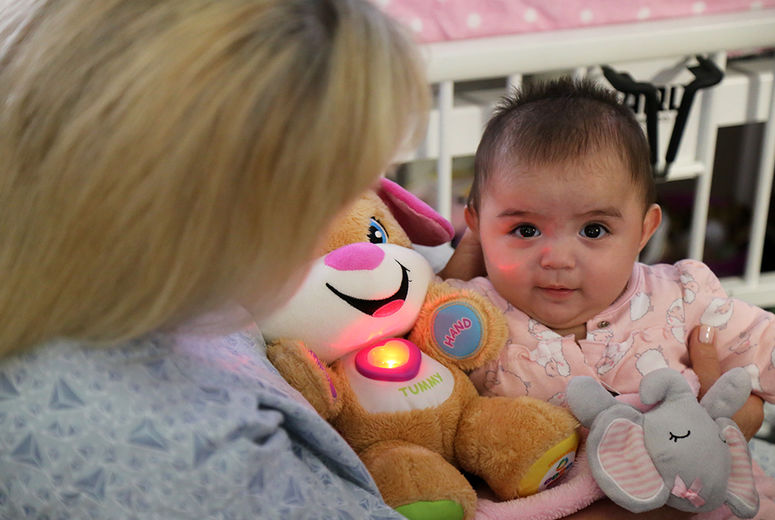 Donna Hadley and Baby Adree have developed a close relationship over the last seven months. 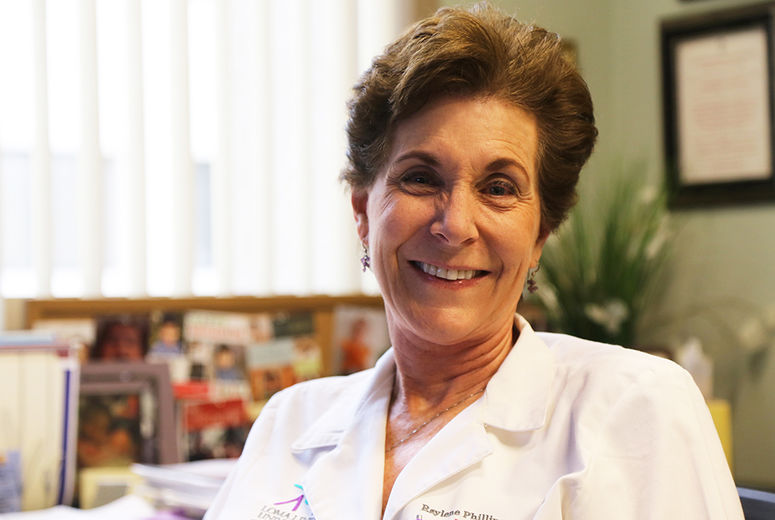 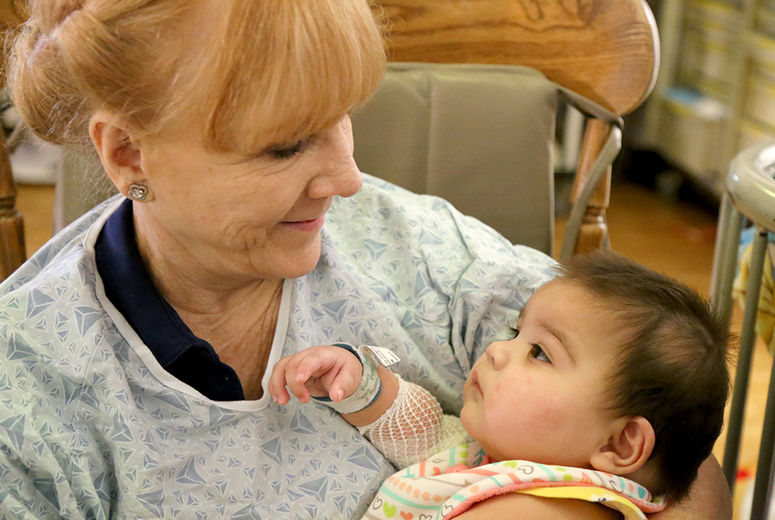 Vicki Stalker insists baby snuggling is good for snugglers as well as babies. 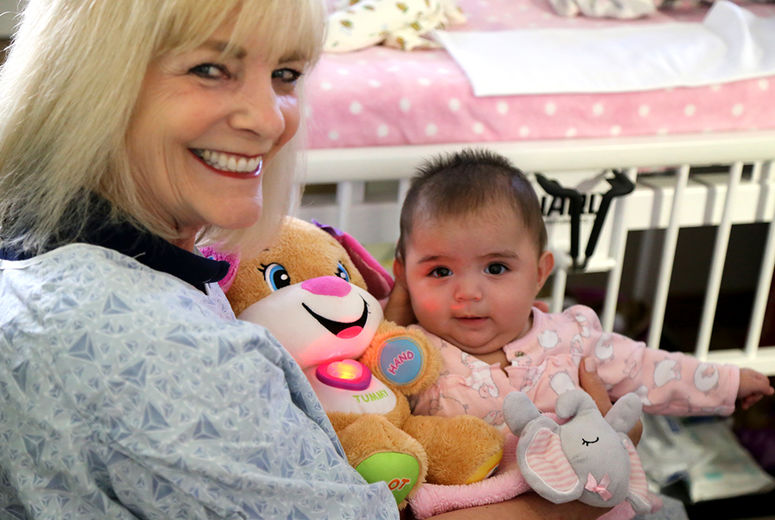 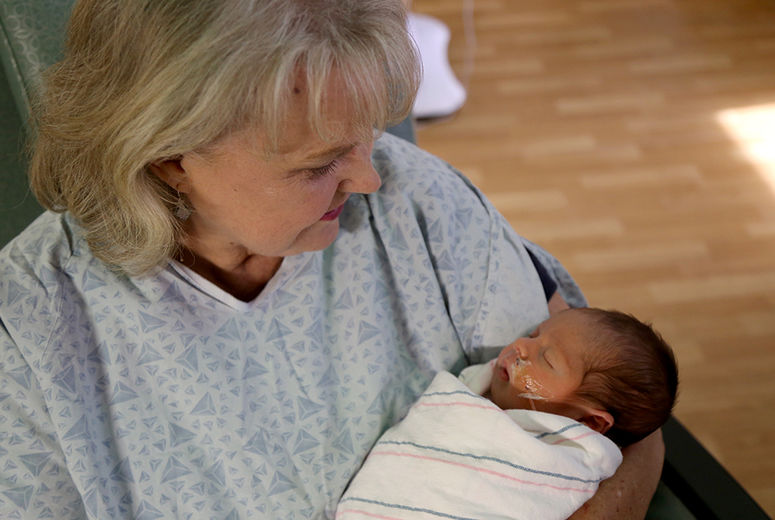 Moments after Linda Hunt picks Baby Conor up, he dozes peacefully in her arms. 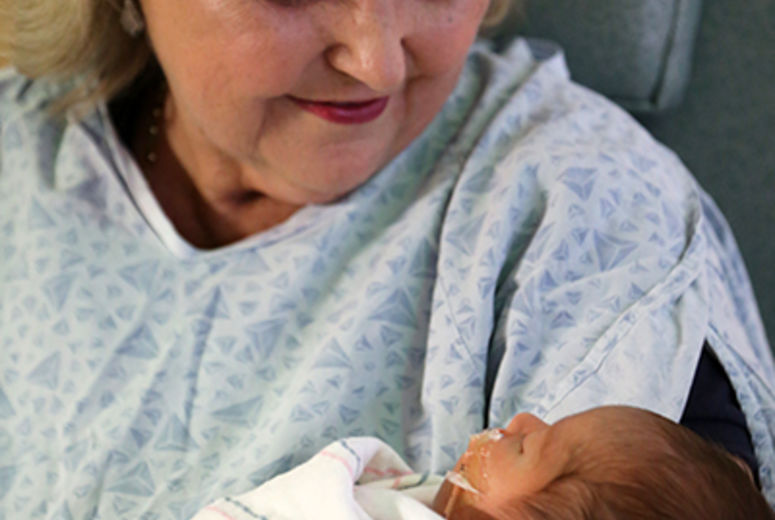 “I just love the feel of babies,” says Linda Hunt. “I feel good knowing they will be able to handle stress better because of snuggling.”