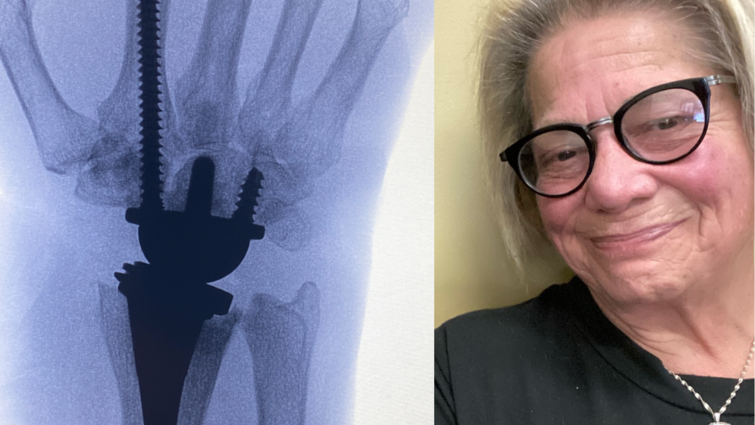 In August, doctors reconstructed a patient’s wrist using the KinematX Midcarpal Total Wrist Arthroplasty. The device was developed by a surgeon in New York and recently received FDA approval. It was the fourth such procedure in the world and the first on the West Coast. Loma Linda University Health is one of five participating locations in a study of the mechanism.

The system offers another treatment option for patients suffering from longstanding wrist pain who don’t want their wrist bones fused as the only option of pain relief. Doctors say this new treatment can better offer patients improved wrist motion, allowing them to again perform simple tasks many people take for granted, such as buttoning a shirt, opening a door, or turning a key.

“We now offer this cutting-edge technology for patients who may need treatment when past procedures haven’t brought the pain relief they needed,” said Barth Riedel, MD, FAAOS, associate professor of medicine at Loma Linda University School of Medicine, associate director of the Virchel Wood Hand Fellowship, and an orthopaedic hand surgeon who performed the procedure. “We’re glad to be on the forefront of this type of medicine for things that can really help patients.”

The KinematX system reconstructs the wrist joint by making a ball-and-socket joint. The system is held in place by inserting screws into the forearm and fingers. This model is different because it slightly changes the arc of motion away from the center of the wrist compared to other implant designs and also relieves pressure on the screws that hold the system together. This enables a person to regain motion for many simple tasks with the thumb and index fingers, known as a “dart-thrower’s” motion.

“It almost perfectly recreates a natural dart-thrower’s motion, which has not been accomplished in any other implant,” Riedel says.

Riedel’s patient, Redlands resident Lynn Phelps, says she’s “beyond thrilled at the results.” After years of pain and previous surgeries on her right, dominant hand, Phelps’ wrist was limited to 40 degrees of range of motion — 20 degrees each way. Now, two months since the surgery, she’s at 110 degrees range of motion — almost triple.

“Some people may not think this is a big deal, but for me it was huge,” Phelps said. I’m grateful and humbled. I owe a lot to Dr. Riedel and Loma Linda University Health.”

For Phelps, the procedure came just in time. After years of pain, she had resigned herself to the fact that the only way to eliminate the pain was to have her wrist bones fused together — an operation she didn’t really want because it meant losing all range of motion.

“If you try this reconstruction and it doesn’t work, you can have the fusion operation later. But once your wrist is fused, there’s no going back,” she said.

Riedel told Phelps that Loma Linda University Health was exploring involvement with testing the new system and would likely be approved within a couple of months. She said she could hang on that long.

“I went through so much just to get to that point, and Dr. Riedel just hung in there for me,” Phelps said. “I’m grateful this blessing came my way.”

The system is now being implanted on select patients at Loma Linda University Health, Hospital for Specialty Surgery, Duke University, Florida Institute, and Indiana Hand Center, with follow-up testing of patients for an academic paper on the research and its outcomes.