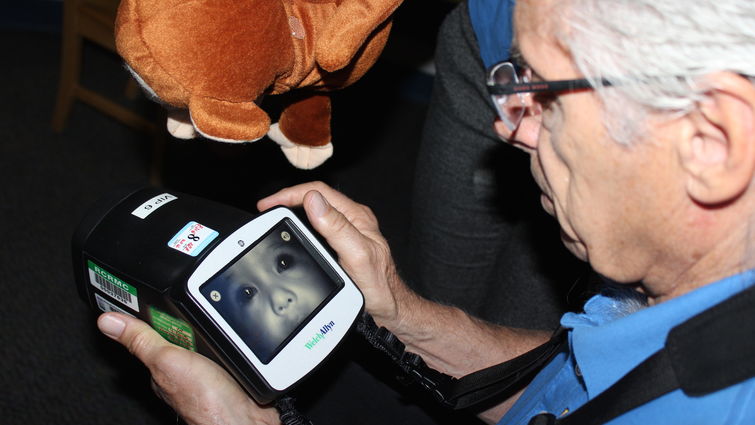 Loma Linda University Health department of ophthalmology and the Lions Club have partnered together to provide free vision screening to children at schools and daycare facilities in Riverside and San Bernardino counties. The George P. Cheng MD, Children’s Vision Screening Program (VSP), funded by a grant from the Cheng Family Foundation, is coordinated through the department of ophthalmology and is supported by Lions Kidsight USA.

The vision screening program began in September 2015 after the Cheng Family Foundation donated $120,000 to the department of ophthalmology. Since its inception, the program has visited 80 schools and daycares and screened over 5,000 kids ages 6 months to age 6 years. Volunteers began visiting schools and daycare facilities in the community for the program in September 2015.

“From birth until age seven, the brain is developing its ability to see,” said Ronela Tavoc, program manager of the VSP. “The vision screening program allows for early detection of eye issues so that those children who need it can get the help they need to foster visual development. Treatment delay may result in a lowered chance of success, which is why these screenings are important.”

Volunteers use a photorefractive screener to test the children’s eyes called a Spot Vision Screener. In roughly five to 10 seconds, the device will screen for multiple eye issues, such as:

Tavoc added that depending on the severity of the specific case, most issues may be corrected with glasses, patching or surgery.

“In some cases, the screening program can be a lifesaver,” said Robert Manning, district governor elect of the Lions Club, who recalls a child who was screened ended up having a tumor that was causing a vision impairment.

Due to the efficiency of the photorefractive screeners, as many as 400 kids can be screened on any given day. Recently, volunteers visited KinderCare in Yucaipa, testing approximately 85 kids, ages 2 to 6, in just a few hours.

“Looking ahead, it is likely that over 13,000 kids will be screened this year,” said Manning.

If any issues are detected during the screening, the child will receive a referral to see a physician. The program follows up within two to three weeks with the parents of those children who did not pass their screening. Manning affirmed that of those kids who are screened, 12-15 percent receive referrals.

“We assist them in any way we can,” stated Tavoc, “whether it’s just to answer questions about screening or the results, or to find an eye doctor that accepts their insurance in their area or by assisting financially.”

Without the VSP, schools would have to contract services out or rely on school nurses to give acuity tests. The VSP does not replace an eye exam with a physician, but can detect an eye issue that may need medical attention.

“This is a program I foresee growing and growing—one that all schools will eventually implement,” Manning added.

For more information on the vision screening, click here.