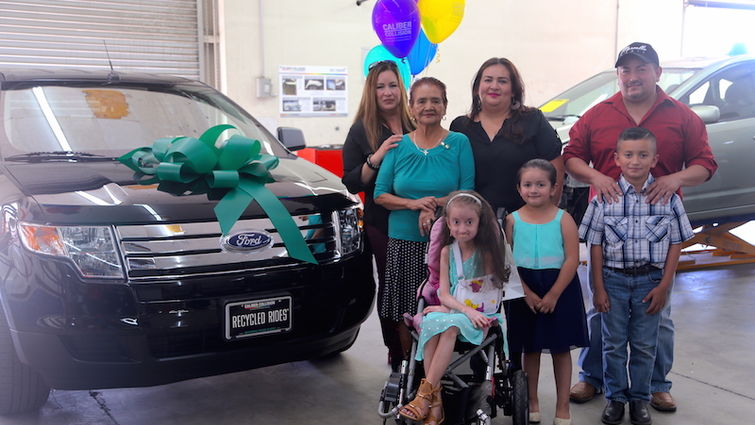 Loma Linda University Children’s Hospital (LLUCH) patient Sofia Rubio was smiling ear-to-ear as a shiny black Ford Edge, accented with a giant green bow, rolled into downtown Riverside’s Caliber Collision. The “Recycled Ride” was a gift to Sofia and her family from Caliber Collision-Riverside Downtown and Geico Insurance through the National Auto Body Council’s Recycled Rides™ program. The car was presented to the Rubio family during a celebration Wednesday, April 20.

“I felt a lot of emotion when I saw the car,” Claudia Rubio stated. Sofia’s mom, who has two other children, says this new car will make everything more convenient. “I was excited to see the happy expressions on the kids’ faces. This means so much to us.”

Through Recycled Rides, collision industry companies team up to repair and donate cars to families in need. The vehicle was donated by Geico and repaired by Caliber Collision technicians who donated their personal time as a community service.

This is the 80th car Caliber Collision has donated through the Recycled Rides program in the United States, and the fourth to be given to a family from LLUCH.

“It’s an honor and a pleasure to be able to work with Loma Linda,” said Dave Goldstein, sr. vice president, operations of California Caliber Collision. “We immediately fell in love with the work they do. There are so many great stories of their care and concern and healing in the community.”

The Riverside family was nominated to be a recipient of the Recycled Rides program by Sofia’s doctor, Wendy De la Peña, MD, a rheumatologist at LLUCH. De la Peña wrote a letter to the program describing the level of care Sofia’s illness demanded and highlighted how the family would benefit if they had another car.

To the family’s amazement, the trunk of the car was full of gifts for Sofia and her two siblings.

Sofia, 10, was diagnosed with systemic Scleroderma, a rare and progressively debilitating disease, when she was 4 years old. De la Peña has been treating Sofia since her initial diagnosis in 2009. Some of Sofia’s many symptoms include tightening of the skin, contractures of multiple joints, ulcers, infection of the bones, mildly diminished heart function, and she relies on a medical stroller to get around. She is also not able to perform normal daily functions on her own without the assistance of family and aides at school.

Despite her limitations, Sofia rarely complains and always has a positive outlook. “She’s my little trooper,” De la Peña added after the car was revealed.

Sofia remains at the top of her fifth grade class academically and has perfect attendance.

“Sofia is a fine young lady and her family deserves this kind of support,” said LLUCH administrator Scott Perryman. “We are extremely grateful to have friends and partners like Caliber Collision and Geico who are making an impact on the lives of our patients and the community.”