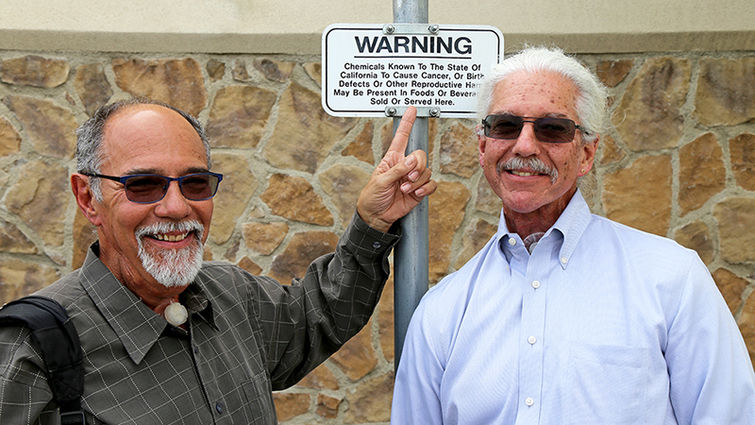 They don’t wear capes or logos on their chests, but John Ready and Dave Ammenti are superheroes to the approximately 30 patients who undergo surgical removal of the larynx at Loma Linda University Medical Center every year.

The duo encourages patients in ways few people can because they know firsthand what laryngectomy patients go through: Ammenti lost both his larynx and tongue in 1994, and Ready (pronounced “reedy”) lost his larynx two years later.

When either of the two laryngectomy volunteers gets a call from the Medical Center, they spring into action. Ready hops on his Harley-Davidson and rides down the mountain from his home in Running Springs to offer encouragement and support. If the patient is scheduled to undergo glossectomy, the surgical removal of the tongue, Ammenti flies in from the Bay Area in an airplane he built. Either way, the message to patients is the same: you don’t have to let the operation prevent you from enjoying a full and meaningful life.

Laryngectomy, the surgical removal of the organ in the neck that houses the vocal cords, is sometimes indicated for patients with throat or laryngeal cancer or traumatic neck injury. The diagnosis can seem overwhelming to patients.

“People panic,” says Gary Lucas, MS, a senior speech pathologist. “The ability to talk is vital. They don’t know how they will survive without it, and they become seriously depressed.”

Every spring, the department of communication sciences and disorders at Loma Linda University Medical Center celebrates May as Better Hearing and Speech Month. This year’s theme — “Communication: The Key to Connection” — perfectly describes what Ready and Ammenti do on an everyday basis.

“What they do for our patients is phenomenal,” says Jodi Datema, MS, a speech pathologist on unit 5400. “People think their life is over when they learn they won’t be able to speak.”

Life beyond the surgery

By using voice prostheses, which make their words sound a bit raspy, these charismatic poster boys of the speech pathology community handle extended conversations with ease. Since Ammenti doesn’t have a tongue, he found the process of learning to speak with the device harder than Ready did, but he persisted. Today, he is an expert at helping glossectomy patients learn to talk, swallow and eat again.

“When people talk to me for the first time, two things happen,” Ready says. “First, they are surprised to hear my voice. Everybody knows that when you have a laryngectomy, you can’t talk. But I had one 21 years ago and I talk. Second, they realize there isn’t anything I used to do that I don’t do anymore. I play sports, I ride a motorcycle. It gives them hope.”

One recent morning, Ready and Ammenti drove to Orange County to hear a woman born without a tongue give a presentation to a support group. In the early afternoon, they drove to an Inland Empire restaurant to consult with Datema and Stephanie Haddad, a speech-language pathology student at Loma Linda University School of Allied Health Professions, on the status of a Medical Center patient.

Eating without a tongue represents a challenge, but Ammenti brandished a plastic container and portable mixer at the table. When the server brought food, he poured two cups of hot water and one bouillon cube into the container, cut his lasagna into small pieces and blended everything together.

“I turn everything into soup,” he said. “The bummer is I have to mix up my meal every time and do the dishes afterward. But it tastes good.”

After lunch, Ready and Ammenti drove 43 miles to Victorville to the home of Maria Cabanas, a Medical Center patient who had her larynx and tongue removed a month ago.

“This is the man I was telling you about,” Ready said, nodding toward Ammenti. Cabanas’ daughter Magda translated for her mother in Spanish. “He had the same operation 23 years ago.”

“She’s definitely been depressed,” Magda said. “There are days when she’s OK, but most days she’s up and down. This has been hard on her.”

A moment later, Cabanas handed the notepad to Magda. “She wants to know how long it took for you to learn to talk after your operation,” she told Ammenti.

“About two years,” he replied.

Visits to patients’ homes are nothing new for Ready and Ammenti. Ready conducts 100 to 200 site visits per year in his role as executive director of the Foundation for Voice Restoration, a Redlands-based non-profit dedicated to meeting the needs of members of the laryngectomy community.

For Ammenti, who serves as a volunteer ambassador, the number is smaller — around 30 to 35 patient visits per year. Most take place near his home, but not all. He has flown as far as Spokane, Washington, and Medford, Oregon, to help patients, and he flies in to Loma Linda three to five times a year.

Ready, however, wins the long-distance prize: he once rode to North Carolina and back to help a future laryngectomee, as patients who have had the procedure are called.

Neither man has allowed their condition to restrict their lives. Ammenti, who is married, loves playing with his four grandkids in addition to flying, fishing, skiing and international travel. Ready, who is single, enjoys sports and playing the guitar, but insists his main passion is riding the Harley.

Ready’s work for the foundation has put him in contact with several prominent laryngectomees, including Frank Batten, co-founder of The Weather Channel, Saul Katz, who manufactures Rockport shoes, and Steve Price, drummer and percussionist for the band Pablo Cruise.

The encouragement Ready and Ammenti bring to patients often means the difference between hope and despair.

That was certainly the case with Cabanas. The two men stayed for two hours, answering questions for her and members of her family, sharing information about technological resources available, and lending emotional support.

She, however, had the last word. When asked whether the visit had been helpful, she reached again for the note pad.

Magda translated: “She says that to find that you would take your time to come out here to see her means a lot. She says it is hard to explain, but very important.”