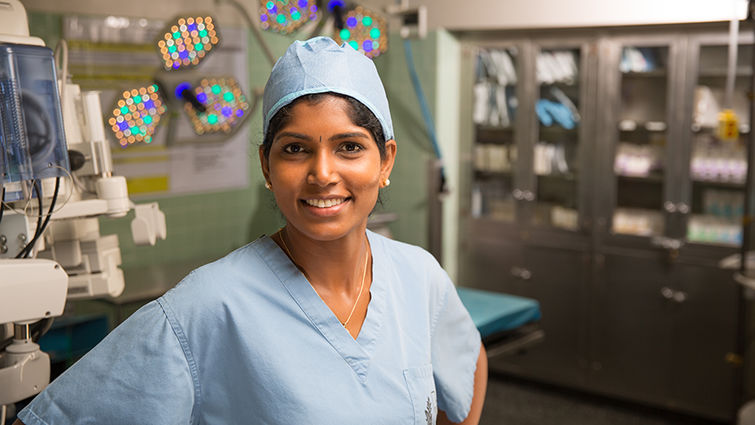 Maheswari “Maggie” Senthil, MD, one of only eight surgical oncologists in Southern California qualified to perform a rare procedure, was in the right place at the right time last July. Photo by Chet Williams.

Although he couldn’t possibly have known it, Joseph Harouni’s life was hanging in the balances during a 13-hour transatlantic flight from Rome to Los Angeles last July.

Ironically, Harouni — a 60-year-old architectural engineer and contractor from Encino, California — wasn’t even on the plane. Fortunately, however, his physician, a medical oncologist at a prestigious Beverly Hills medical center, was. Just a few months earlier, that same physician had diagnosed Harouni with poorly differentiated adenocarcinoma of the appendix.

By the time he received the diagnosis that February, Harouni had already completed chemotherapy treatment, but to no avail. Instead, the cancer had reached Stage IV and spread from his appendix to multiple other organs. The doctor said there was nothing more he could do.

Harouni and Susan, his wife, were stunned. With nothing but their faith in God and love for each other, the couple went home to pray and hope for a miracle.

Fast-forward four months and Harouni’s physician wasn’t the only oncologist on the plane that fateful July morning. Maheswari “Magi” Senthil, MD, a surgical oncologist at Loma Linda University Medical Center, just happened to be returning from a family vacation in Italy the same day.

Even so, the two oncologists would likely never have met had not another passenger suddenly become ill during the flight. When the flight attendant called for a doctor over the intercom, both Senthil and Harouni’s physician responded.

Senthil got there first and took charge of the case, diagnosing the woman with severe dehydration. When the flight crew produced an IV bottle filled with saline solution, Senthil asked Harouni’s physician to hold it overhead so gravity would force the liquid to flow into the passenger’s arm through an intravenous line.

While they waited, Senthil introduced herself and revealed that she is a surgical oncologist who specializes in treating peritoneal surface malignancy, a deadly form of cancer that invades the lining of the abdominal cavity and spreads through multiple organs. “Oh, my goodness!” Harouni’s physician exclaimed. “I have a patient I should send you.”

The surgical procedure Senthil mentioned involves two separate stages. In the first, cytoreductive surgery, the surgeon extirpates the tumors by removing various internal organs and the lining of the abdomen. In the second, known as hyperthermic interperitoneal chemotherapy, or HIPEC, the surgeon inserts catheters into the abdominal cavity to deliver heated chemotherapy drugs that attack the microscopic cancer cells.

Due to its complex nature, cytoreductive surgery is only offered at a few centers. Currently, only eight surgical oncologists in all of Southern California are qualified to perform the procedure.

Fortuitously for Harouni — who had already been declined treatment at another institution — Senthil is one of the eight. “I have performed over one 100 of these procedures,” she says.

When Harouni finally got the call explaining this his physician had met a surgical oncologist on the flight home from Italy who might be able to help him, he was ready for some good news. “My wife always says it was a match made in heaven,” he notes.

Did this new revelation mean he was going to live? Had God answered their heartfelt prayers? The Harounis could hardly wait to find out. They scheduled an appointment with Senthil and made the trip to Loma Linda. It would be a huge understatement to say she impressed them immensely.

“Dr. Senthil is one of a kind,” Harouni says. “She’s courageous, compassionate, responsible     . . . I can go on. She’s an unbelievable listener! Her personality and integrity give us patients the energy to go on.”

Harouni remembers that during the surgery, which took place on August 31, Senthil was attentive to Susan’s needs as well as his own. “She would come out and give my wife updates,” he says.

When Harouni finally awoke in the recovery room, Senthil leaned over to tell him she had gotten every last vestige of the cancer. “Dr. Senthil’s calmness is why I am alive,” he says.

Senthil was running a few minutes behind schedule for Harouni’s first post-op appointment. “It was one of the days when she was doing an operation,” he says. “I told her, ‘Dr. Senthil, I know you’re busy.’ She said, ‘No, no, no, no. I’m done with everything. I’m here 100 percent for you. I’m all yours.’ That meant a lot!”

More than nine months after the surgery that saved his life, Harouni is doing well. Every two months, he goes to a local hospital for a CT scan and blood test, then takes the results to Senthil for evaluation. “She told me that after a year, I should be back to normal,” he says, adding that he looks forward to returning to work.

In the meantime, he’s got plenty to do. “I like to read,” he says. “Mostly spiritual and religious learning. I’m an Orthodox Jew. Learning is my main thing, everything else is icing on the cake. I also like to travel. We’ve done a little travel here and there.”

Senthil says Harouni should start packing his bags. “We have spectacular results at Loma Linda,” she says.