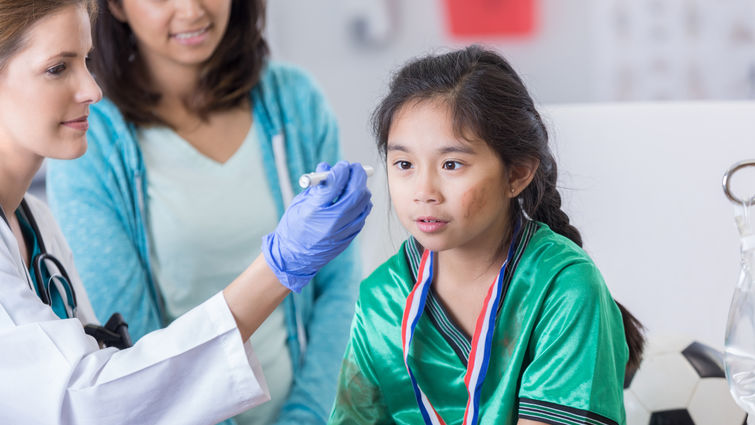 More than 3.2 billion people from around the world have watched elite athletes compete during the 2018 World Cup — many aspiring athletes themselves. During the games, some of today’s favorite players took numerous hits to the body, including the head.

Brain injuries, such as a concussion, have become a growing conversation among athletes and their parents says Lauren Simon, MD, director of primary care sports medicine at Loma Linda University. According to Consensus statement on concussion in sport — the 5th international conference on concussion in sport held in Berlin, October 2016, a “sport related concussion is a traumatic brain injury induce by biomechanical forces.”

“Concussions are complex, biomechanical changes in the brain,” Simon says. Sports-related concussions can be caused by direct blow to the head, neck, face, trunk or anywhere on the body that triggers a force to the head.

Symptoms of a concussion are best identified with the following four categories:

It’s imperative for both coaches and parents to be aware of a concussion in a young player, Simon says. This will reduce the possibility of further injury and reduce their risk of prolonged symptoms or post-concussion syndrome.

According to California law, all high school athletes must participate in concussion education prior to any practice. Both the student-athlete and parent must sign an agreement. In fact, any player who exhibits symptoms of a concussion must immediately be removed the game and prohibited from return to play until evaluated by a physician and cleared with a written notice.

In 2016, the American Youth Soccer Organization banned players under the age of 12 from heading the ball.

We have to be careful when it comes to treating children’s head injuries, Simon says. We can’t look to the adult elite athletes performing at the World Cup and treat children’s injuries the same.

On average, most student-athletes are able to recover after three to four weeks. Physicians will use a combination of tests to evaluate an athlete’s ability to return, including a Sport Concussion Assessment Tool 5 (SCAT5) and other tests to measure concentration, examine the level of consciousness, check balance, examine ocular motor symptoms and test for symptoms and readiness with physical exertion. In addition, a physician will also check the athlete’s neck and reaction time.

In a 2017 study published by the American Academy of Orthopedic Surgeons, girls were found to be 12 percent more likely to sustain a concussion versus their male counterparts.

Many physical therapists will conduct a Buffalo Concussion Treadmill Test to monitor symptoms and physiological responses to determine if ready to return to play.

Treatment is individualized for each athlete depending on their condition. Physicians use a step wise or graded return to play as they evaluate each player. Gradually, athletes will begin to return to various activities, including doing homework, playing a video game, or running to determine their readiness.

A concussion can also occur in a player experiencing a whiplash injury. According to Thaddeus Wilson, MD, MPH, whiplash may be produced by a hard fall or strike to the body, which can cause excessive acceleration forces inside the brain tissue. These sudden changes in velocity of the head may disrupt the neurons’ delicate biochemical balance, resulting in the need for additional energy to alleviate the stressed state and heal the neurons so they can function normally again. This “stressed state” is understood to be the cause of many of concussion symptoms.

It’s particularly important to note that children’s necks are not as strong as adults,’ Wilson says. When the neck is weaker, there is a greater likelihood of excessive acceleration forces compared to a similar person with a stronger neck. This means the brain is at greater risk for injury in those with weaker neck muscles. Young athletes are encouraged to do strength training and exercises to help build up the neck strength.

“If a concussion or injury to the brain does occur, it’s important to follow the guidelines Dr. Simon mentioned,” Wilson says.

Players who return to the game sooner than advised risk the chance of a second concussion. Unfortunately, one concussion followed by another hit to the head does not simply equal two concussions; the outcome can be much worse.

According to Wilson, athletes may experience a disproportionately higher amount of nerve damage and swelling that can lead to worse symptoms and long-term negative outcomes if the brain has not fully recovered from the initial injury.

Given these factors, when asked about return to participation in contact sports, Wilson states that “Everything we do comes with a risk, however putting yourself in a position where you are likely to sustain a hit to the head or body always comes with a higher health risk, and the risk is exponentially higher if you do not take the time to recover fully from an initial concussion.”

Before returning to any form of play after sustaining a concussion, both Simon and Wilson advise every player to consult with their physician to determine when they can safely return to participation.