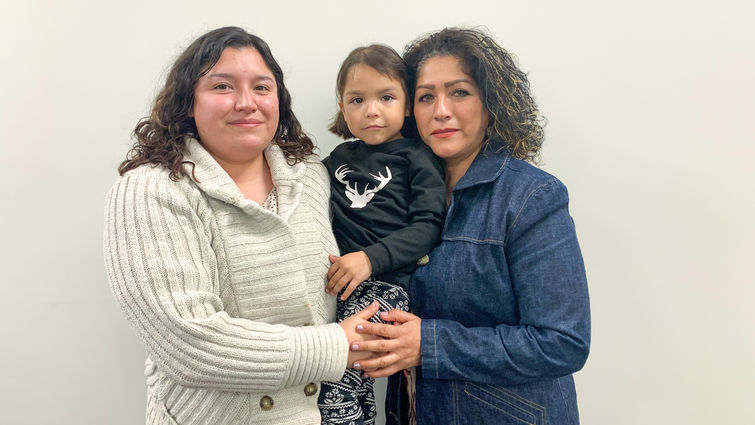 Isabel Graciano watched her granddaughter Giselle Morales suffer from a barrage of health issues since she was only four months old — ovaries not developing completely, having a central line placed, kidney issues, and needing dialysis. When Giselle needed a kidney transplant at the age of four, Graciano didn’t hesitate to volunteer as a donor.

“Giselle’s disease is rare — she is one of few children with this condition,” Sheth says. “As an infant, Giselle was brought to the hospital with swelling and eventually diagnosed with a type of nephrotic syndrome that leads to kidney scarring and kidney failure. She was also at risk for a type of kidney cancer.”

No matter the pain she is in or if she cries, Giselle tells her family that she is okay — she is happy. Graciano says her granddaughter is an example of courage.

“Despite everything, Giselle and her family are always happy, positive, and upbeat,” Sheth says. “Giselle is an energetic, lively girl — full of spunk. She always brings a smile and joy to our clinic.”

After Graciano volunteered to be a living kidney donor for Giselle, tests and blood typing were performed to see if Graciano was a match and if Giselle’s body wouldn’t reject her donation.

Graciano says she was very anxious and tense throughout the whole process — she worried something would happen that wouldn’t allow her to donate to Giselle. She kept praying that everything would work out.

Giselle’s mom, Estefania Morales, says she was overwhelmed with many conflicting feelings. “I was happy but also really scared,” she says. “It’s my mom and my daughter — I didn’t want anything to happen to either of them. I felt it was my responsibility as Giselle’s mom to be the one to donate my kidney.”

But Graciano told her daughter that she needed to think of Giselle’s future. “My mom told me it was better for me to wait, in case Giselle needs another kidney in the future — then I could potentially donate mine,” Morales says.

Graciano’s kidney ended up being a match for Giselle. Both the transplant surgery and the kidney removal surgery went well. However, since Giselle’s transplant, she has had many complications and has needed multiple admissions and therapeutic interventions that are not the normal post-transplant course, says Sheth.

“Her future is good, and with the strong family support she has, she will do well,” Sheth says. “But unfortunately, she will need more than one transplant in her lifetime due to the fact that donor kidneys have a limited life span in a recipient.”

But for now, Giselle carries a physical reminder of a grandmother’s love for her granddaughter.