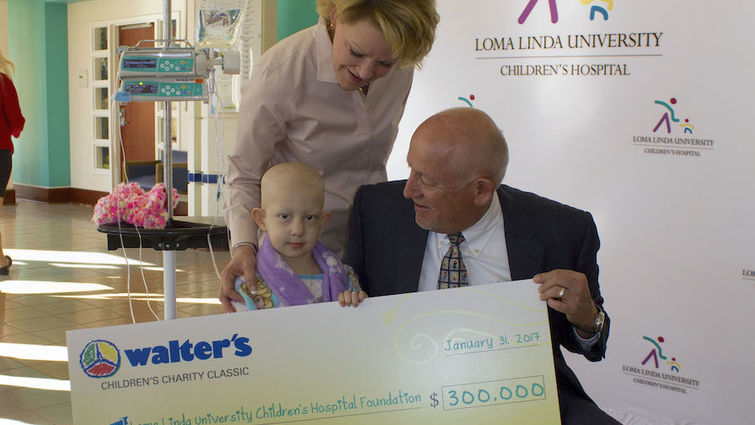 LLUCH patient, Angie, 3, is just one of many children who will benefit from the $300,000 donated by Walter’s Children’s Charity Classic to the hospital. WCCC founders, Steve and Cathy Kienle have been long time supporters of LLUCH.

Since its inception in 1995 the Walter’s Children’s Charity Classic (WCCC) has put its efforts to impacting lives at Loma Linda University Children’s Hospital (LLUCH), and slowing down is not something they plan to do.

WCCC founders, Steve and Cathy Kienle along with the WCCC Committee presented LLUCH with a check for $300,000 Tuesday, Jan. 31. Funds were raised during the 21st Annual Walter’s Children’s Charity Classic on Monday, Sept. 26, 2016 – the most successful golf tournament to date.

Steve noted that what the WCCC would not be successful without their committee that is comprised of “phenomenal business partners” in the community.

“What we do is the easy part,” he said. “Seeing the work that is being done to care for these patients is the most gratifying for us. It truly is a blessing to have Loma Linda in our backyard.

All proceeds form WCCC will go toward Vision 2020, The Campaign for a Whole Tomorrow, specifically to name a playroom in the new Children’s Hospital tower.

Cumulatively WCCC has raised over $4 million over the last 21 years. To show the hospital’s appreciation LLUCH administrator Scott Perryman, and patient Angie Valencia, 3, from Coachella, presented a recognition plaque to the Kienle’s.

“There are 250 patients in the hospital today,” noted Perryman, “and you help us take care of them. You care so much about people you will likely never meet, and to us that means everything.”