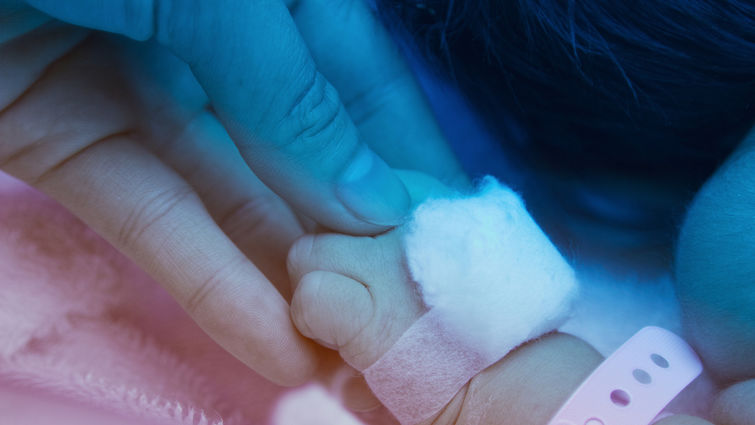 Adriana Mossontte is one of over 1,000 nurses working at Loma Linda University Children’s Hospital. She works on the neonatal intensive care unit (NICU), caring for the most delicate babies in the Inland Empire. An 84-bed unit, Adriana carries her patients — and their parents — through times of struggle and recovery, tubes, tests and pokes, all things she herself is all too familiar with.

At 14, Adriana, (then known as Adriana Gurrola), had been experiencing intense pain in her back and had difficulty breathing, at times. Her pediatrician advised it was nothing more than growing pains. However, when the “growing pains” persisted, her mom decided it was time to see a new doctor.

It was September of 2000. Having just started her freshman year of high school in Norco, Adriana skipped her fourth day of school to pay a visit to her new doctor along with her mom. The doctor thought perhaps Adriana had a heart murmur and ordered a chest X-ray — and that’s when they got the news.

“He came back in the room and told us it was lymphoma,” Adriana recalls. We went straight to 4800 and I never left.”

Adriana and her mom made the 30-mile drive to LLU Children’s Hospital, home to 4800, which is the pediatric hematology/oncology intensive care unit, which treats pediatric blood-related diseases and cancers. It is the largest of its kind in the Inland Empire.

I just remember them telling me I had a 20-pound tumor growing inside of me.Adrianna Mossontte

Adriana was officially diagnosed with Non-Hodgkin’s lymphoma, a cancer that starts in and affects the white blood cells. She was admitted to LLU Children’s Hospital and didn’t leave for three months. The pain and difficulty breathing was being caused by a large tumor in her chest.

“I just remember them telling me I had a 20-pound tumor growing inside of me,” Adriana recalls.

She later learned it was the size of a football. “The tumor just grew in the space between my ribs and heart. It was so big it collapsed my left lung.”

One of the oncologists at the time, Albert Kheradpour, MD, now the chief of pediatric hemotology/oncology at LLUCH, distinctly remembers Adriana.

“We did not think she would make it,” he says.

Adriana was shell shocked after learning of her diagnosis, one that is uncommon in children. Currently, only about five percent of all childhood cancers in the Unites States are non-Hodgkin lymphomas, according to the American Cancer Society.

“My whole world came crashing down,” she said of learning she had cancer. “I was completely depressed.”

She recalls isolating herself, living in the dark and not wanting to talk or socialize with anyone — except her mom.

“My mom was by my side every moment and wouldn’t have left even if I had told her to.”

Adriana did, however, talk to her nurses.

“Nurses were the best part of everything, she says. “They were my mom if my mom wasn’t there. They really, really care for their patients.”

A nurse on 4800 since 2001, Rebecca Dolman, MSN, RN, says her patients become like family. “You get to a point that you work with these kids so much and you want them to have the best treatment possible.” Now the patient care director for the unit, Dolman says she and her team of nurses always give their patients the best no matter what the outcome.

Adriana was not expected to survive.

The cancer would always come back, but I was still here. Everyone called me ‘the girl who wouldn’t die.’Adrianna Mossontte

Because of the size and position of her tumor, it was inoperable.

“It was everywhere,” says Adriana.

Adriana’s oncology team at the time chose an aggressive course of treatment to fight off the cancer.

Kheradpour remembers looking to others for insight as her case was very challenging. “We contacted many physicians all over the country for continuation of her treatment.”

Much to everyone’s surprise, the tumor was shrinking, but it just wouldn’t go away. “Chemo left a calcification around the ribs and heart where it could never be penetrated. The cancer would always come back, but I was still here. Everyone called me ‘the girl who wouldn’t die.’”

In 2001, Adriana was scheduled to receive a bone marrow transplant but at the last minute she made the decision to not go through with it. “Something was telling me I wouldn’t survive, and my doctor trusted me.”

A month after she cancelled the bone marrow transplant, Adriana received a stem cell transplant. This seemed to offer some hope. She was 15.

Something to look forward to

Having not returned to high school, Adriana began home and hospital study, during which time she realized her future was imminent. “There was no doubt in my mind I wanted to be a nurse.”

At 16, Adriana was able to complete the high school proficiency exam and graduate high school. It was around the same time she also received proton beam therapy at LLU Cancer Center.

At 16-and-a-half she took the next, natural course of action: she started college.

“I was finally able to focus,” she remembers. “College gave me something to look forward to.”

She studied nonstop and took advantage of the nurses who were always nearby. “We would talk about my science classes,” she says.

Despite being in and out of the hospital, relapsing every six months, Adriana was steadfast on surviving and becoming a nurse. “I relapsed eight or nine times, but the doctors and nurses never gave up on me.”

It wasn’t until Adriana was 19 when she received a clean bill of health. She received maintenance chemotherapy until she was 21.

Despite the trials and tribulations she experienced at LLU Children’s Hospital, Adriana knew she always wanted to come back to give to others the same care that she received.

After college at Cal State San Bernardino, Adriana made her way to LLU School of Nursing and graduated in 2009.

Now 32, Adriana is married with two children and has been a NICU nurse for eight years. She attributes her success as a nurse to her whole experience as a patient. “I am 100% here because of the nurses who cared for me. They were everything”

And that is what she is aiming to be to her patients.

“I am so much more empathetic. These kids are going through the toughest time of their lives. To know that I was there once — what these parents feel like with their struggling kids. You can’t teach that,” says Adriana.

There are times I have to say a task doesn’t matter right now, but letting a mom hold her baby for another five minutes…she might not get that again.’Adrianna Mossontte

“My experience allows me to be calmer, more compassionate. There are times I have to say a task doesn’t matter right now, but letting a mom hold her baby for another five minutes…she might not get that again.”

For more information about treatments for pediatric cancer or to learn more about the NICU, call 800-825-KIDS.